I am not going to claim that THE MIDNIGHT MAN (which first hit festivals and release around the world in 2016, but is making its American debut on Blu-ray now) is a great film. I would be on shaky ground to claim it is even a good film, but it is effective at times and quite watchable throughout—even when the filmmakers take a wrong turn and clichés rise up to overpower more interesting avenues of exploration.

The film opens with a surprisingly gory sequence that appears to be setting the tone for a nasty, grisly horror film. A title informs us that the year is 1953. Three children, around twelve-years-old, panic as they try to light a candle while one of them keeps an eye on a pocket watch, eventually announcing in an ominous voice that they did not light it in time. They sit in a dark attic, surrounded by a circle of salt on the floor, frightened out of their wits. When things get too scary, one of the children tries to run, leaving the circle of salt, and is promptly grabbed and dragged into the dark. After a few seconds, scaly hands emerge from the darkness, holding the little girl’s decapitated head. Soon, a second child is killed in a stunning, bloody manner, leaving the last child—a girl named Anna—the sole survivor.

After this impressive prologue throws down the gauntlet of gruesome child death, writer/director Travis Zariwny (credited as “Travis Z” and working from an original screenplay by Rob Kennedy) dials the proceedings way back as the film jumps to the present day. It turns out that the best section of the film is actually the quiet set up of the first act and the introduction of Alex (Gabrielle Haugh) and her dementia-afflicted grandmother Anna (Lin Shaye). 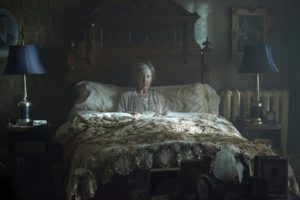 As you might have guessed, the young girl who survived the slaughter in the prologue grew up to become Grandma Anna. It is quickly made clear that while she physically escaped the clutches of whatever beast killed her friends, her mind never fully recovered from the trauma. She still lives in the house where the murders happened, with very little decorating or updating having occurred in the ensuing sixty years, but refuses to leave her bedroom.

Alex has left college to take care of Anna, but it is clearly not an easy job to care for her grandmother by herself. Anna is easily anxious and confused, calling for help through an intercom that has speakers in every room. Frustrated after difficulty getting Anna to go to bed, Alex invites her friend Miles (Grayson Gabriel) over to hang out. As they go through a trunk in the attic looking for a hand mirror that Anna has specifically requested, they find a box filled with items like a candle, a shaker of salt, and a list of names marked with dried blood spots. Also in the box is a list of instructions for how to play “The Midnight Game.” Despite the obvious horror movie set up of engaging with a shady game that calls for pricking your finger and putting a splotch of blood next to your name on a scrap of paper, Alex and Miles follow the instructions to begin.

Even though she is not the lead, it is fitting that Lin Shaye is top-billed in THE MIDNIGHT MAN because she is the engine that drives the first forty or so minutes of the film. Shaye takes the role of Anna and runs with it. She is simultaneously pitiable, warm, sadistic, and frightening as hell as the film calls on her to be. Much of the plot, as the film rolls along, hinges on what Anna’s role in the game is to be. Her behavior also points to why Alex is so quick to play a game that she clearly should not be messing with. The game has very specific rules from which you cannot deviate. That sort of order has to be appealing to someone who was raised by a grandmother who personified chaos. So much of the first half of the film deals with Alex and her relationship with her grandmother that the film needs as powerful a presence as Shaye and she shows up to play. 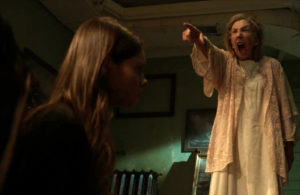 Surprisingly, given Shaye’s dominance in her smaller amount of screen time, Haugh and Gabriel make for an appealing pair with whom to spend most of our time. While Miles is a severely underwritten character, Gabriel is a likable presence and does not overplay the “wannabe boyfriend” feelings that are practically embedded into the DNA of this kind of stock nice guy role. Haugh, given the meatier part of Alex, does a good job of bringing together the frustration of a decent young woman trying to do right by her difficult family while also starting to chafe at the fact that she has been forced to put her life on hold right at the point where she should be coming into her own. If the film had been an exploration of the sometimes-damaging hold that family can have over us using a more subtle supernatural metaphor, THE MIDNIGHT MAN could have been a very good genre film. It’s too bad that the filmmakers settle for a second half that slides into territory that is so familiar.

Where the film falls apart is with the actual game. If you make a mistake and the titular demon/creature catches you, he supposedly uses your greatest fear against you. But with one exception, every person that is caught and suffers the consequences seem to just get torn apart, decapitated, or have a demon fist slammed through their face and out the back of their skull. None of these deaths really have anything to do with a fear of the dark or pain, to use two examples present in the film. This lack of definition in the villain’s motivation flies in the face of the strict, carefully spelled out rules of the game. 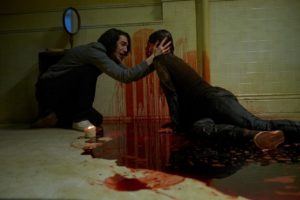 The Blu-ray box promises that Robert Englund is in the film but, as is the case with most of the roles he has taken over the last fifteen or so years, he simply pops up for a couple of scenes as the exposition-spouting authority figure. He brings his welcome, hammy presence to the part of Anna’s doctor who knows far more than he initially lets on, but while I appreciate that most actors have to take a lot of paycheck gigs, I am beginning to get frustrated that young horror filmmakers who grew up fans of the NIGHTMARE ON ELM STREET films just are not giving him much to do. Compare the interesting work that Barbara Crampton is doing these days in good, weird genre flicks with what Englund has been stuck with. There is a place for Englund in today’s genre films. I just wish filmmakers would write him interesting parts the way they have for Crampton and Shaye and not just use him as a name to place above the title for two days of shooting. 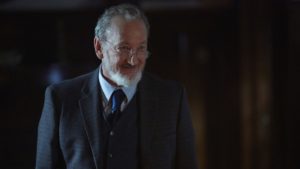 Okay, grumpy aside over. Back to your regularly scheduled review.

The screwed up family dynamic between Alex and Anna does reach a dark conclusion in the third act, but the impact of the moment is run over by the need to pay off the game. In a strange way, even though the film is titled THE MIDNIGHT MAN, the actual Midnight Man seems unnecessary to the story that has been told. I would have rather been given a dark family drama about a confused elderly woman and the emotionally wounded granddaughter she has misled for her entire life. That is what the film basically boils down to, but the plot about the game gets in the way and only muddies the waters. 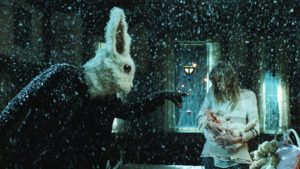 We have reached the point in the review where I look at the original film.

The remake keeps the basic premise of a young woman looking after her confused grandmother who plays The Midnight Game. Where the original film differs is the fact that she plays it alone and does not have all the baggage of traumatic childhood events. Both young women are named Alex, but while the Alex in the remake is a low-key emotionally tortured soul, the Alex in the original is a goofball drama queen who wants to be an actress. Color me somewhat surprised that the technically slicker remake is both more mainstream and tuned in to the idea of trying to make the titular villain a metaphor for family dysfunction while the rougher-around-the-edges original just wants to trot out as many jump scares as possible, without really considering the darker truth at the heart of the story.

Where the original film is better is in its clearer sense of what it is the Midnight Man does. Instead of using your greatest fear to kill you, he traps people who lose the game in a life-long hallucination where they are tortured by visions of their fears attacking them. This is a far more horrific idea to me than just being killed. It also explains a couple of confusing moments in the remake where the Midnight Man does cause people to hallucinate before they return to sanity and have to continue playing the game.

While credit goes to the original film’s writer/director Rob Kennedy for coming up with the basic plot that is used in both films, MIDNGHT MAN wears out its welcome after about thirty minutes, leaving it feeling much like a short film stretched out to feature length with numerous sequences of Alex simply walking around her grandmother’s farmhouse with a candle.

If you took the added depth that the remake gives to fleshing out the tragic history of Anna and Alex’s family and melded it with the clearer focus of what the Midnight Man can do and wants, you would have a really good horror movie. Instead, you wind up with two movies that show promise, but eventually make a few too many mistakes to hold up. That said, I do feel that the remake improves just enough on the bones of the original film to be worth watching.

THE MIDNIGHT MAN is out on Blu-ray Tuesday, June 5, 2018 from Scream Factory.