The need to assign a genre to a film can do funny things to a film’s reputation. Thanks to a trailer that sold it as a straightforward horror movie and an eye-catching cover on Fangoria’s ninth issue, MOTEL HELL was thought of as a horror film for most of its early life. This designation, however, served to be a disadvantage, as MOTEL HELL is more of a dark comedy about horrific things, and while it utilizes its share of horror tropes, the sense of humor it offered often made critics and fans dismiss at as that lowest of low things, a horror-comedy. (In a pre-DEAD ALIVE age, the “horror comedy” moniker was death, relegated to the likes of HYSTERIA, MICROWAVE MASSACRE and BLOODBATH AT THE HOUSE OF DEATH. Never mind that there were horror films that used comedy successfully, like PIRANHA and AN AMERICAN WEREWOLF IN LONDON.)

MOTEL HELL’s embracing of gallows humor backed by solid performances and a disregard for any type of reality (even the “heroic” characters seem more like strange archetypes than actual human beings) made it much more sympatico with Paul Bartel’s EATING RAOUL, another cannibalism-centric comedy in which a moralistic couple uses those they feel superior two as a food source. While EATING RAOUL is pitched a bit more satirically in nature, it’s similar in tone to MOTEL, and yet the two films spent their first two decades aisles apart from each other at video stores, as while MOTEL was advertised as a horror film about deranged, flesh-eating rednecks along the lines of THE TEXAS CHAIN SAW MASSACRE and EATEN ALIVE, EATING RAOUL was sold for exactly what it was, a dark satire on cultural mores. The end result? RAOUL gets a large (and deserved) cult reputation, and MOTEL HELL disappoints horror fans due to its goofy tone and lack of gore until slowly amassing a following from those who want what it has to offer. 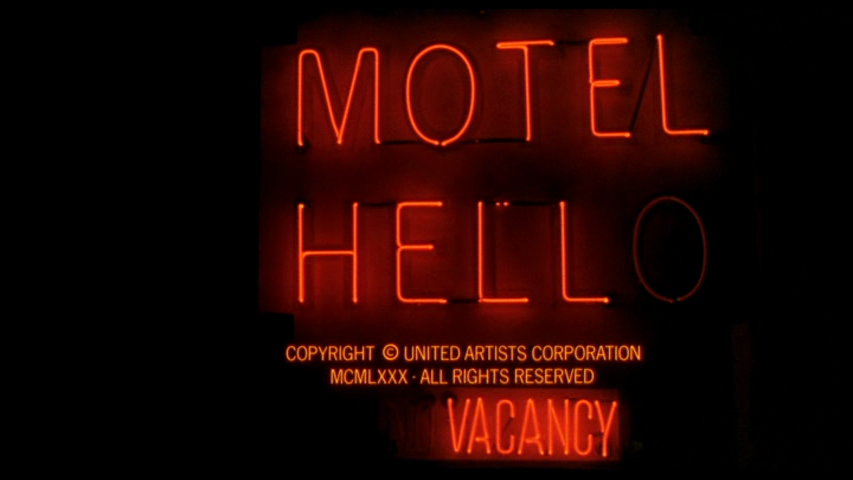 This isn’t to say that MOTEL HELL features the same bite that RAOUL does – while RAOUL is slyly poking fun at culture, MOTEL HELL seems perfectly happy to just have fun in general, and nowhere is that more obvious than in the performances of the leads. For those who’ve never seen the film, Rory Calhoun and PORKY’S’ Nancy Parsons play Vincent and Ida Smith, a pair of siblings who own the Motel Hello (the “O” in “Hello” is burning out) near a small town. The hotel is also the only place where you can get Farmer Vincent’s Fritters, a smoked meat delicacy that’s made it a popular off-route destination for foodie travelers.

It takes, as the films iconic tag line mentions, all kids of critters to make Farmer Vincent’s fitters, however, and those critters include humans, which Vincent and Ida “farm” by creating roadside traps that cause traffic accidents or make their victims otherwise easy prey. The victims are then kept alive in the farm, their vocal chords ripped out and their heads covered with bags, until they’re “ripe” enough to make the fresh meats. None of this is much of a spoiler – it’s pretty much apparent that the fritters in question are human in origin going into the film, so the cannibalism aspect isn’t saved for some shocking revelation that it would be in other films. 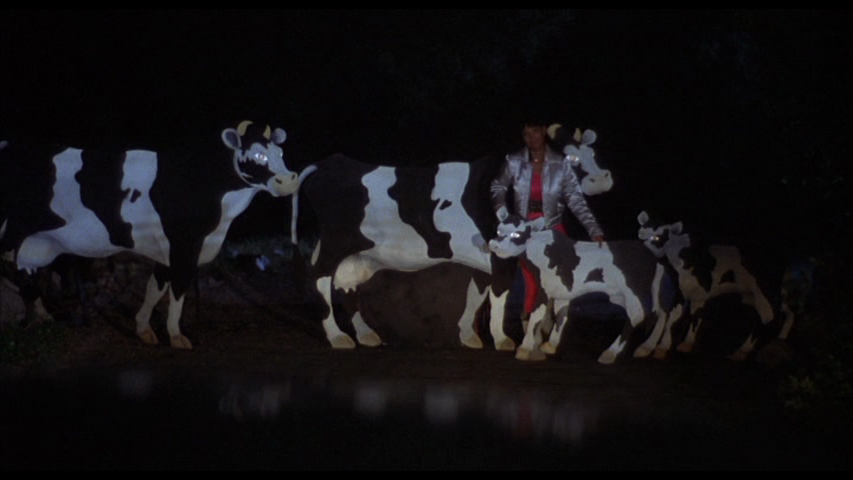 No, the cannibalism isn’t the unique part of MOTEL HELL – it’s the characters that inhabit the film and the way they interact. The minimal plot concerns Terry, a young woman who is essentially adopted by the Smith clan after falling into one of their traps with her biker boyfriend (why she is spared the same fate as everyone else is anyone’s guess, though it seems Vincent just takes a liking to her on a parental level) and who slowly begins to have feelings toward the elderly master of meats. She doesn’t, however, know exactly where the meats come from, and she’s oblivious to the advances of younger Smith brother (and local sheriff) Bruce (Paul Linke), who is similarly unaware of the goings on, and the sibling jealousy of Ida, who passive-agressively threatens her. As a heroine, she’s not much of someone you can identify with, but as a character, she’s fascinating – a people-pleasing airhead with father issues, Terry isn’t someone you root for so much as smack your forehead at out of sheer confusion.

Meanwhile, Vincent and Ida busily procure additional meat sources, and while the film goes out of its way to emphasize the “questionable morality” of some of the victims (a pot-smoking rock band including John Ratzenberger, a pair of “slutty” girls from a ski resort, including Rosanne Katon), the fact that they’re “immoral” seems pretty coincidental to Vincent’s trappings. Only when a (hilarious) swinging couple stays at the hotel and tries to get Vincent and Ida to join in does any kind of moralistic message make sense, so it seems less that the film is trying for any sort of satire than just creating a bunch of goofy archetypes and letting them bounce off of each other, disregarding any sort of reality or identifiable character. 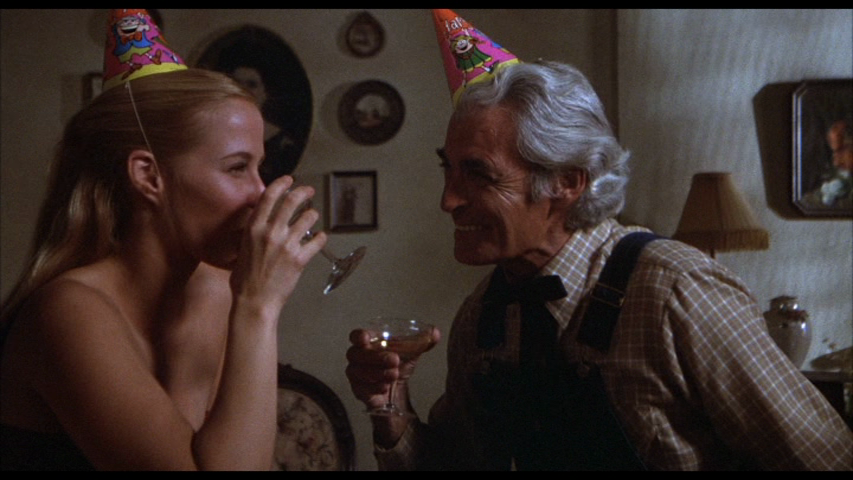 And that’s certainly not a bad thing, especially when you’ve got great performances by Calhoun and Parsons at the head. Calhoun is clearly having plenty of fun, and his Farmer Vincent becomes the most realistic character in the film, if only because you get a sense of the motivation behind his insanity. Saying that his traps give him a creative outlet and emphasizing treating his food in the most humane way, Vincent is not only a compellingly bizarre figure, he’s a compellingly bizarre figure that makes sense in his own internal logic, a feat not a lot of cinematic villains manage to achieve.

Released to DVD by MGM years ago as a double feature with DERANGED (which could also use an upgrade), Scream Factory has given a great new life to the film with their new combination Blu-ray/DVD release. Given a 1080p transfer with well-saturated colors that are especially effective during the nighttime farm sequences, the release also ports over the extras from Arrow’s earlier UK release of the film and adds some new content as well. 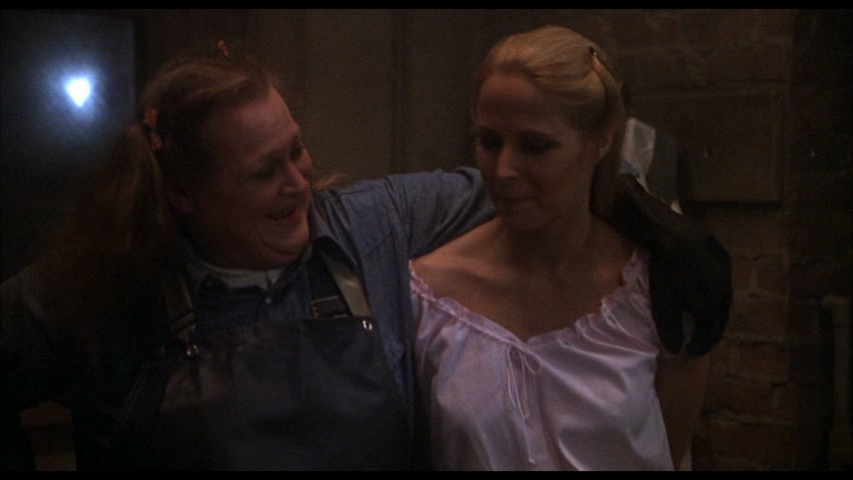 Ported from the Arrow release are interviews with Paul Linke and Rosanne Katon, who talk enthusiastically about the film, though Linke remembers wanting to make it more of a comedy than it turned out to be. (I think he’s mistaken – MOTEL HELL manages to be just tongue-in-cheek enough without turning goofy.) A short documentary called IDA, BE THY NAME is ostensibly about MOTEL HELL’s Ida, but the interviewees are mostly film scholars and scream queens that talk about women in horror in general and only pay occasional lip service to MOTEL HELL. Even worse, one interviewee mentions Jason’s mother being the killer in the second FRIDAY THE 13TH film, and another talks about how MOTEL HELL may have been a reaction to the Reagan Administration and the likes of “Dynasty” – two things that weren’t even in existence when the film was made! C’mon, people, if you’re going to be interviewed about a subject, at least do a little homework.

The additional content includes a new documentary on the film featuring director Kevin Connor, actor Marc Silver (who played one of the members of the rock band) and producer/writer Robert Jaffe, and it’s the usual impressive Scream Factory job, with Connor talking about the difficulties with managing the tone and how the studio wanted to make it more of a horror film. Connor also supplies a new audio commentary track moderated by THE HILLS RUN RED director Dave Parker, and he makes for an engaging presence, dismissing the Reagan-influence claims and any attempts at satire, though there are a few notable gaps and Parker doesn’t seem particularly prepared to have enough questions to fill the running time. An interview with cinematographer Thomas Del Ruth talks about the difficulties in staging several of the film’s sequences. Photo galleries and a theatrical trailer are also included, along with trailers for other Scream Factory releases.

MOTEL HELL may have taken a while to emerge from its horror cocoon to find an audience more appreciative of the cult comedy it actually is, but Scream Factory has done a marvelous job making up for lost time. A fine presentation of a hugely entertaining film, given as much special treatment as one could hope for, MOTEL HELL should please both new audiences and those that have been waiting for years to see the film in such an elaborate format — now that they’re finally prepared for the movie it is, rather than the pig-headed splatter fest it was marketed as.