Tim Burton’s biopic ED WOOD ends on an optimistic note, with the world premiere of PLAN 9 FROM OUTER SPACE, a film that would eventually become Wood’s magnum opus. As great as a film as ED WOOD is, I’d argue that just as fascinating, if infinitely more depressing, a follow-up could be made chronicling Wood’s later years, when the director was no longer able to make films in the genres he so loved and ended directing and churning out screenplays for low-rent sexploitation films with increasingly explicit content to capture the eyes of the burgeoning hardcore film market. These weren’t Henry Paris-level spectacles, mind you – in the pre-DEEP THROAT days, these were quickly –shot, barely-written, poorly-acted exercises that were just very loose excuses to string some sex together. The likes of Vinegar Syndrome and Alpha Blue Archives have done wonders to bring eyes to the more ambitious world of ‘70s hardcore, but Ed Wood’s films? Those weren’t them.

It’s not to say that Wood didn’t try to make even his sex films his own. NECROMANIA, newly re-issued on DVD from Alpha Blue Archives as part of a series of Wood sex films, is his penultimate film, shot in 1971 under the moniker of “Don Miller,” and even while the film it completely inept, rather senseless, and, unforgivably, pretty dull, you can still see glimpses of the film Wood would have loved to have made, a strange, perverse sexuality he would have loved to have explored. 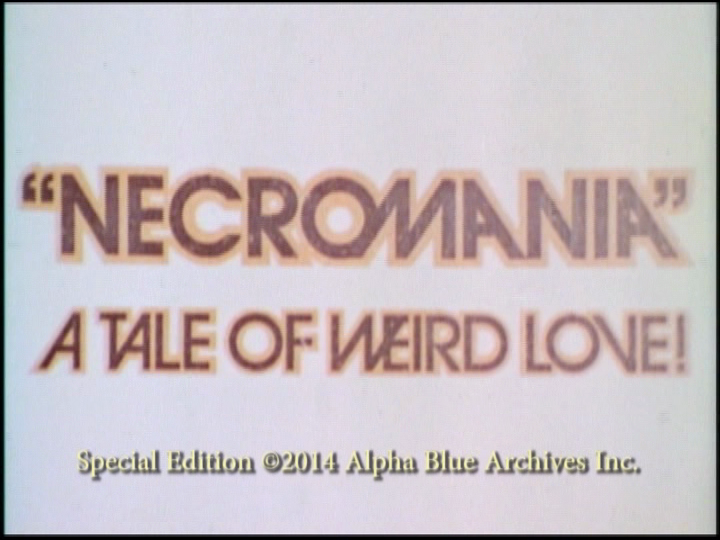 NECROMANIA, inexplicably subtitled ‘A TALE OF WEIRD LOVE,’ as though “Necromania” suggests a tale of standard, missionary position love, features a young couple, Shirley (L.A.-lensed sex film stalwart Rene Bond) and Danny (the scrawny but not unattractive Ric Lutze, Bond’s boyfriend at the time) having relationship problems. It seems that Danny can’t rise to the sexy occasion, so they head to the home of Madam Heles, a practitioner of the dark arts who sleeps in a coffin. While Heles won’t rise from her coffin, the two are greeted by her assistant, Tanya, who fondles some Halloween decorations to prepare for the big event. 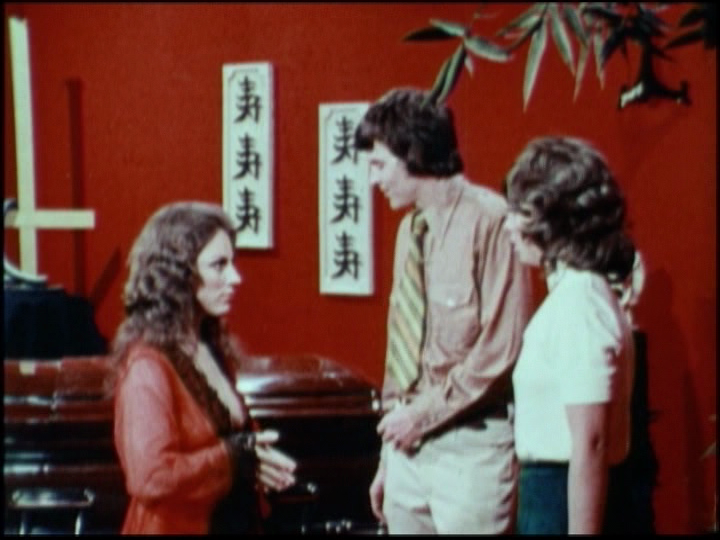 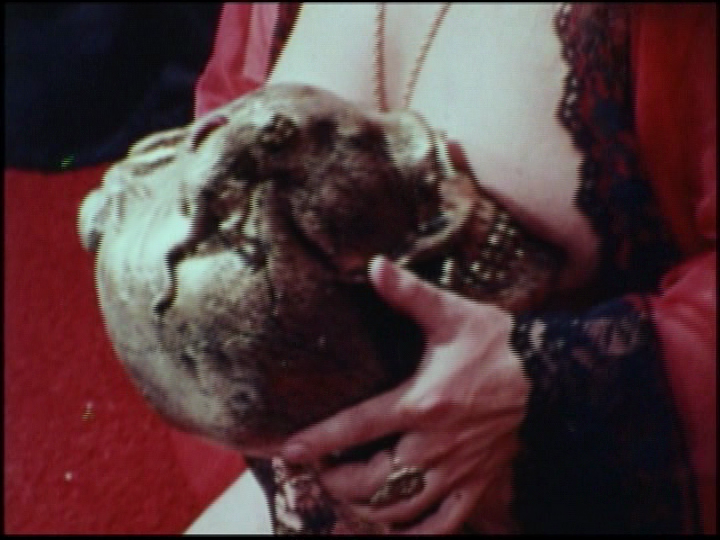 Even if most of the film consists of unremarkable sex – the 49-minute “feature” version is softcore, but the hardcore inserts are included as a bonus feature, even if Danny’s being able to maintain an erection seems to disregard the whole point of the film – there are still a few Wood touches on display, mostly in terms of the dialogue. Bela Lugosi is referenced as the couple enters, a giant dildo is used as a room service call, and Shirley says, “I admit it’s a strange place, but strange happenings come from strange happenings!” There’s also some question about Danny and Shirley convincing others that they’re married when they’re not, but it doesn’t seem to make much difference.

NECROMANIA is a goofy curiosity more than anything, but Alpha Blue Archives’ re-release of the film is more than welcome. While the print is certainly worn, it’s certainly watchable, and it’s certainly nice to have a lower-priced option than the difficult-to-find Fleshbot release from 2001, a release that was eagerly anticipated as the sole previous incarnation, Something Weird’s VHS, had lacked the hardcore footage from the film that was found by Rudolph Grey allegedly at a yard sale. 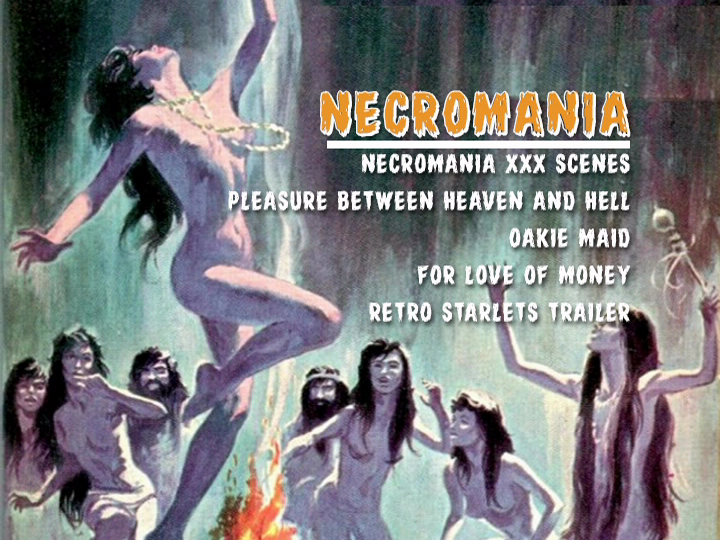 Alpha Blue’s release doesn’t have anything in the way of Wood-related bonus material, but it does have three bonus “features,” all vintage adult reels. The 51 minute PLEASURE BETWEEN HEAVEN AND HELL features non-sync sound as a narrator explains why various performers in on-screen sexual couplings are in their own version of hell, ranging from a voyeur who deals with a cocktease to that same cocktease failing to initiate an orgy, interspersed with colorful visions of mostly-nude figures in “hell.” OAKIE MAID is a 34-minute short about three brothers, two of whom have sex with centerfolds (they call the third a “fag” for not wanting to fuck a magazine in front of his siblings – straight people are weird.) who hire a maid service that leads to everyone having sex, and then getting married when the brothers find the maids having a lesbian affair. (The trio of brothers also makes an appearance in PLEASURE watching some sex in a different shot, so PLEASURE is most likely a number of random loops edited together.) FOR LOVE OF MONEY is a 63-minute tale of blackmail and blow jobs directed by “Ben Koran” that starts with a woman complaining about how she hates giving head followed by her lumberjack-looking beau saying “enough romance, let’s fuck.” 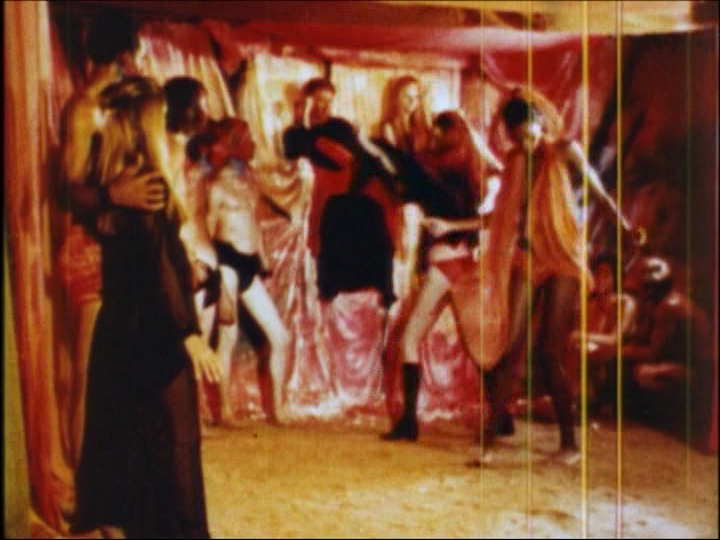 Hell, as depicted in PLEASURE BETWEEN HEAVEN AND HELL. or possibly a Ren Faire after dark.

Alpha Blue Archives is also releasing three additional Wood sex films, NYMPHO CYCLER, THE UNDERGRADUATE and THE YOUNG MARRIEDS, the last of which was his final film as a director, shot three months after NECROMANIA. We’ll be looking at those as well, but in the meantime, Wood fans can finally check out his witchcraft-tinged sex opus, even if they may went to keep one finger near the fast forward button.