TO LIVE AND DIE IN LA is frequently regarded as William Friedkin’s attempt to recapture the magic of THE FRENCH CONNECTION through an ’80s MIAMI VICE filter. To dismiss it as that is short sighted as it is a neon hued crime classic of it’s own.

William Petersen is Richard Chance, a Secret Service agent tasked with taking down flamboyant counterfeiter Rick Masters, played by Willem Dafoe. Chance and new partner John Vukovich (John Pancow) slide down a morally murky hole to obtain money to bring him down, resulting in one of the finest car chases in film which is fully relevant to the plot. Chicago stage actor Petersen—between a small part as a bartender in THIEF and shortly before the iconic role of Will Graham in MANHUNTER—is almost the Mann/Friedkin ’80s muse for hard bitten federal agents. He carries the role with such aplomb and swagger, whether he is being jocular at the bar with his partner or blackmailing a sexy informant. 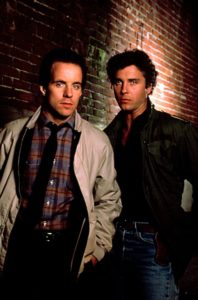 This new release is a full hi-def transfer from the negative, scanned at 4K and supervised by director William Friedkin. Some of the scenes are a little coarse and grainy but overall the print brings out the stark contrast of the blacks and neons of the LA night. The climactic car chase down the wrong way of a freeway especially benefits and appears visceral and crunching. Wang Chung’s legendary score sounds excellent, all hazy keyboard drones and coursing frenetic beats. Another score like this should have propelled them to Tangerine Dream like status instead of being known for “Everybody Have Fun Tonight”.

Some of the new features to the Shout Factory edition include-

-“Taking a Chance”- an Interview with William Petersen

-“Wrong Way: The Stunts of TO LIVE AND DIE IN LA an interview with stunt coordinator Buddy Joe Hooker

-“So in Phase: Scoring TO LIVE AND DIE IN LA an interview with Jack Hues and Nick Feldman of Wang Chung

-“Renaissance Woman in LA”- an interview with actress Debra Feuer

-“Doctor for a Day”- an interview with actor Dwier Brown

it also contains the previous extras

-“Counterfeit World: The Making of To Live and Die in LA” which features behind the scenes footage and interesting continuity details of the car chase