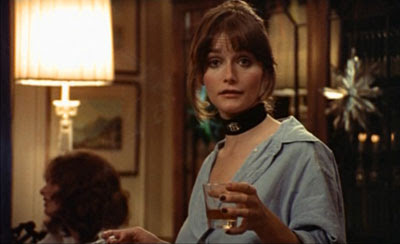 When I was a kid, I looked forward to sleepovers on the weekends. Since I was 5, my best friend growing up was Michael and we were perpetually at the video store. We definitely loved the Blockbusters and Hollywood Videos (where I would later get my first job), but it was the smaller video stores that would feel like home. Employees and management were on a first name basis with the customers and you would sometimes leave with that sweet poster you saw hanging on new release day. It became so frequent, that that particular store would let us check out movies prior to release as long we kept it quiet. Some of them were clearly not meant for the masses as I remember BRIDE OF CHUCKY carrying a promo tag along the bottom of the screen every few minutes. Still it was worth it as back then it wasn’t the easiest trying to get ahold of movies whenever we wanted as streaming services were a thing of the future. To make sure we always a copy of our favorites in hand, we would connect two VCRs together with a blank VHS recording whatever movie it was we just rented. The best movies received the SP treatment in order to grab the best quality version we could get and scotch tape cover art onto it using pictures from a cable provider’s TV guide magazine for that month. One of the gems discovered during these trips was BLACK CHRISTMAS, a movie that grabbed our attention simply by its holiday themed title and unapologetic artwork. Anything holiday based was going to be obvious treat and this one did not fail.

For those uninitiated, BLACK CHRISTMAS surrounds a sorority that’s been harassed by profanity driven phone calls from a mysterious psychopath. The caller manages to create multiple voices and insinuates threats. The girls shrug them off at first despite a local missing girl in town. One of them is killed in the beginning, unbeknownst to the others, and kept in a rocking chair in the attic. Her disappearance prompts her father to begin an investigation with law enforcement and the girls who stayed around for the holidays realize this might be just the beginning. 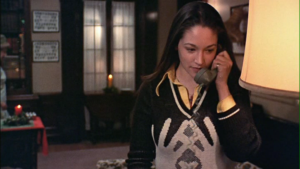 Released in 1974, BLACK CHRISTMAS came before any of the now infamous slasher franchises and is often considered a heavy influence for movies like HALLOWEEN or WHEN A STRANGER CALLS. While technology has come a long way in terms of how a menacing phone call scenario would be played out now, the movie holds up beautifully with a great deal of tense and creepy moments. The identity of the killer may feel obvious to some, but the ambiguous ending leaves nerves rattling as this is someone who defines a psychopath. He screams and goes absolutely insane in several scenes even though we hardly get a good look at him. His vulgar language comes off perverse in what could have been easily laughable moments. What helps elevate the movie is that does have a sense of humor, thanks to the housemother’s secret drinking habit and Margot Kidder’s performance as the uncensored Barb. Genre fans will recognize other faces such as Olivia Hussey and John Saxon, providing some memorable roles here. The whole cast works and exudes chemistry onscreen that doesn’t feel forced down viewer’s throats. 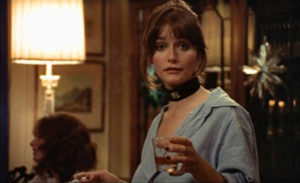 While there have been previous Blu-ray releases, Scream Factory has provided a new 2K scan and a collection of special features for die hard fans. There are new interviews with actors Art Hindle and Lynn Griffin (who makes an interesting point that this movie defies normal horror tropes by killing off the virgin first). I played the 5.1 audio mix and it sounded great. It sounded even better after watching the special features where clips of the movie were inserted and I could hear the awful hissing in the unaltered sound mixes. While I did own the Critical Mass Blu-ray (that particular HD master is included on the second disc), I wasn’t able to get my hands on the “Season’s Grievings” edition released in Canada. No worries for those who didn’t grab that: SCREAM FACTORY has done us a favor by rolling over special features from both releases resulting in several interview segments and mini documentaries put together from different years making the completest in me very satisfied. 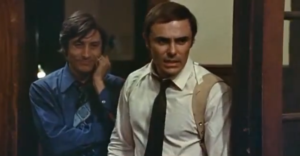 This collector’s edition comes highly recommended for both fans old and new. I’m sure releases like these will also help cult favorites like BLACK CHRISTMAS find younger audiences who need to be exposed to something more original.