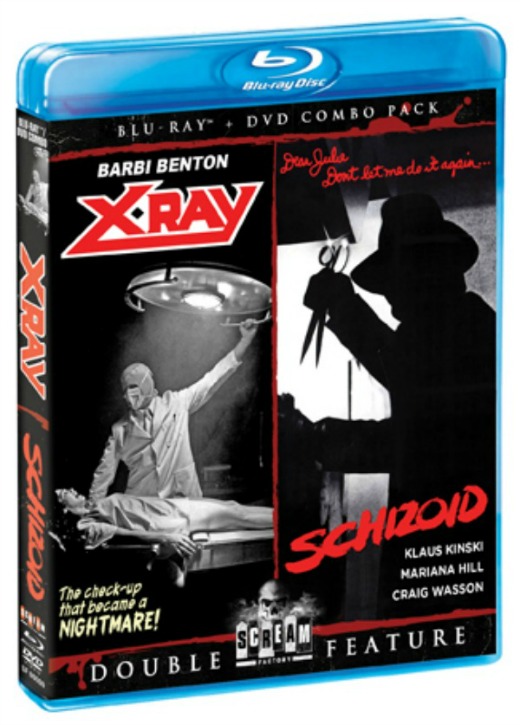 Golan-Globus’s Cannon Films output is notable to exploitation film fans almost entirely for their action pics, giving star treatment to the likes to Chuck Norris, Charles Bronson and Michael Dudikoff throughout the ‘80s.  With easy-to-sell exploitation as their trade, one would think the cousins would have plunged heavily into the burgeoning slasher film market as well, but their horror films can be numbered in the single digits, and none of these managed to become franchises, relegating them to cinematic obscurity. 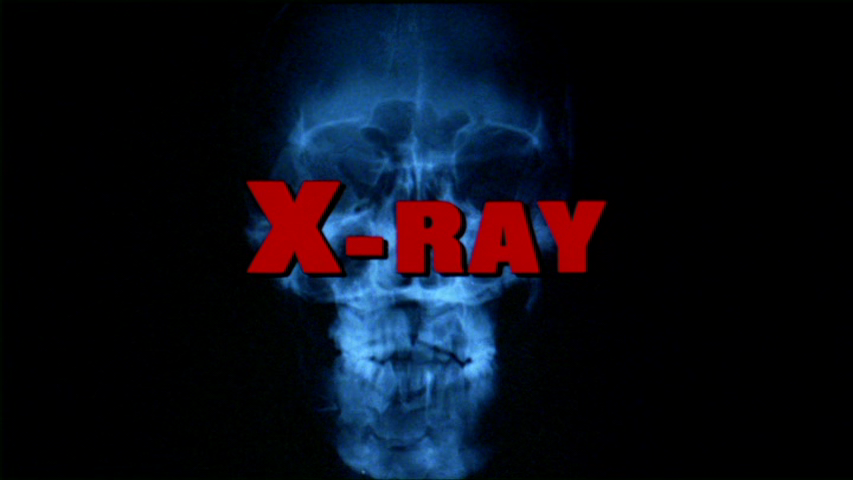 Shout Factory has done a fine job at pairing up two of these films, 1982’s X-RAY and 1980’s SCHIZOID, in an attractive package just released as a Blu-Ray/DVD combo.  Both films feature medical treatments as their central focus and wear their slasher film inspirations boldly on their respective sleeves, making the coupling a perfect way to recreate a vintage night of horror in your own home.  It almost doesn’t matter if the films are actually any good.

Which is for the best, as X-RAY in particular is by no means a good movie.  More commonly known by the moniker HOSPITAL MASSACRE, under which it was released by MGM on VHS, X-RAY served as a potential star vehicle for Playboy Playmate Barbi Benton, an attractive young woman who was making the TV guest star rounds at the time.  (She would follow her slasher film bandwagon jump by vaulting into the sword and sorcery bandwagon with DEAHSTALKER.)  Directed by THE LAST AMERICAN VIRGIN’s Boaz Davidson who, in an interview on the disc mentions that he was a last-minute replacement, X-RAY is well-shot and features good use of the hospital setting, but lacks the logic, suspense and interesting characters that would make this any more than a curiosity. 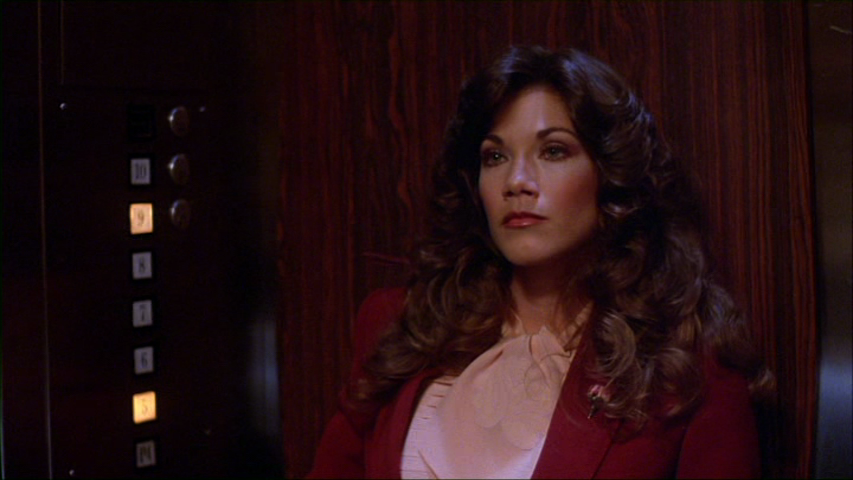 Benton plays Susan Jeremy, a divorced woman who goes to a local hospital in order to get her unspecific test results.  While she thinks it will only be a few minutes (she leaves her boyfriend waiting in the car), she’s instead pulled into a Kafka-esque nightmare as someone in doctor’s garb switches her results with, er, something that keeps her in the hospital, slaughtering anyone who may be in the way of her actually leaving.

That’s all there is for the set-up, and you can almost see the screenplay notations suggesting that they’ll come up with a reasonable explanation for all of this in a later draft.  A prologue sequence involving young Susan’s childhood friend being murdered via coat rack(!) will clue sharp-eared watchers to the identity of the killer pretty early on, and even if you don’t pick up on it, the film is so loaded with red herring characters that the single non-red herring stands out like a sore thumb.  There’s a creepy janitor, a creepy doctor, a creepy drunk guy, three creepy ladies (one played by a man) that follow Susan around for no discernible reason… 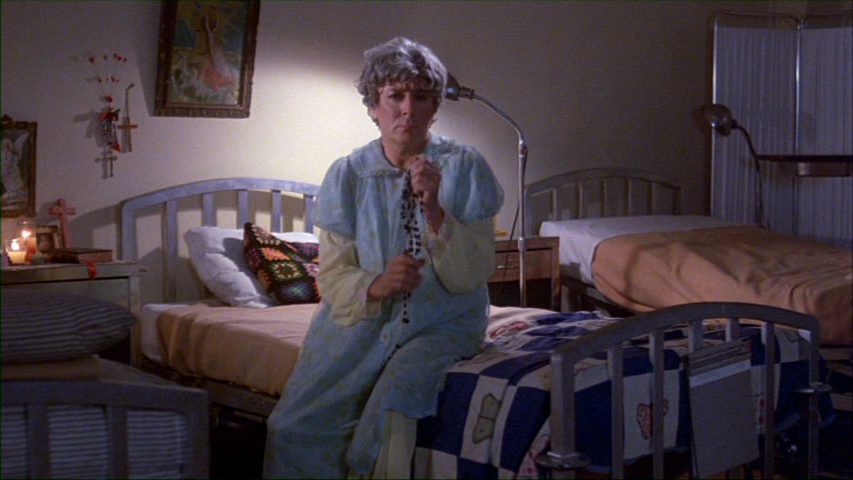 Benton displays the required amount of acting chops, but the script makes Susan so stupid and unpleasant that she’s basically impossible to root for.  She forgets her boyfriend in the car for apparently hours, doesn’t seem to bother asking anyone for assistance until standing around forever, and is generally rude and surly when she does.  Despite all of this, she never even notices that she can just leave whenever she wants to!  It’s no wonder her ex-husband doesn’t answer the phone when she calls.  The movie itself actually seems to be rooting against her at certain point, juxtaposing one character’s brutal murder with Susan freaking the hell out just because her elevator got stuck!

As a sex object, however, Benton gets a chance to shine during the inexplicable examination scene, when one of several creepy doctors who have the bedside manner of any given Udo Kier character has her strip down in order to examine her in vivid detail, carefully brushing away her hair so he can make sure she has visible nipples.  It’s tawdry exploitation at its most unsubtle, and it’s easily the reason that X-RAY has any sort of reputation at all.  No self-respecting heterosexual male and/or medical fetishist should walk away disappointed. 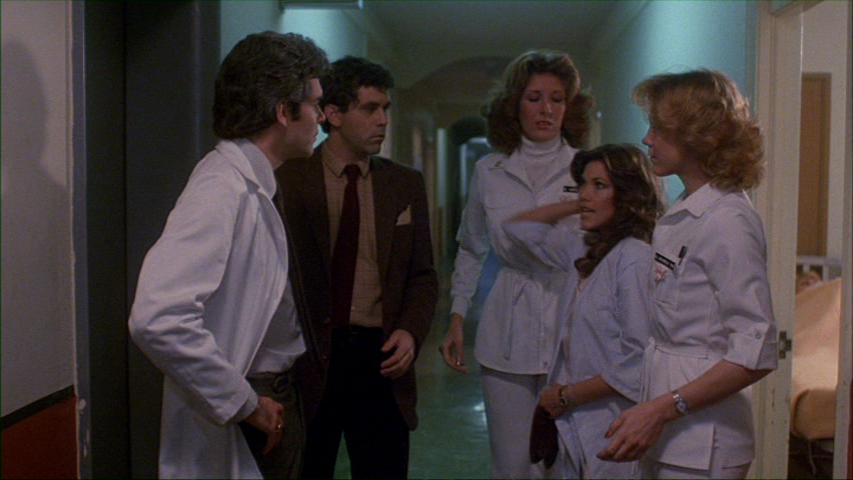 It’s certainly not for the death sequences themselves, which are quick and almost entirely involve characters that haven’t been bothered to be given any personality traits.  In the interview, Davidson mentions that he’s not a horror film director, and he does give it the old college try, it just results in a lot of strange moments and jump scares that border on the hilarious, couple with a bombastic score by Alron Ober that seems to be selling a much creepier movie than this one.

Oddly, X-RAY is still watchable, as while it’s miles away from good, it’s never dull, and thus fulfills the basic requirements of a slasher film.  It’s got blood and boobs and both of these are presented in a well-lensed manner, and while you’ll never get the 89 minutes back, you won’t feel they’re entirely wasted either. 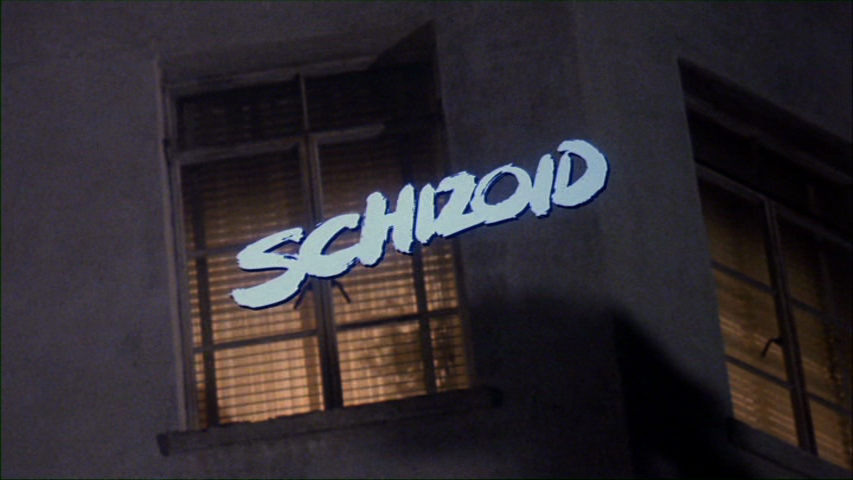 The companion film, SCHIZOID, isn’t an undiscovered classic either, but thanks to some clever casting, memorable moments and solid direction from David Paulson (SAVAGE WEEKEND), it manages to be at least a cut above the average slasher film fare.  At least it feels like a fully-formed film rather than some vague slasher tropes stuck into a hospital setting.

SCHIZOID stars the underrated Marianna Hill (THE BABY, MEDIUM COOL) as Julie, an advice columnist working her way through a divorce with co-worker Craig Wasson.  She tells her troubles to the rest of her support group, a generic batch of human dysfunction run by Dr. Fales, played by Klaus Kinski.  The words “played by Klaus Kinski” should clue you in to the fact that Fales is the viewer’s suspect number one when members of the group start getting bumped off, especially after we see him luridly leering at his daughter, a snarling little nymph played by a pre-ANGEL Donna Wilkes. 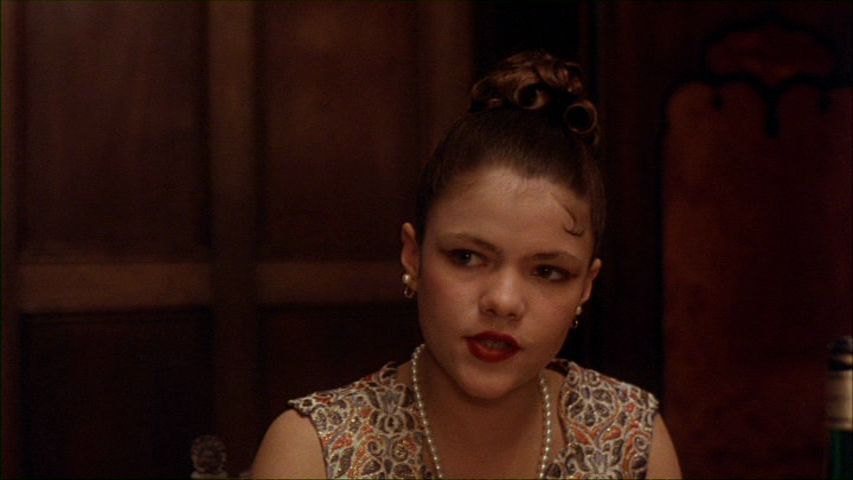 While the support group as victims storyline is a standby in slasher films, ranging from BAD DREAMS to A NIGHTMARE ON ELM STREET 3 (also with Wasson) to obscurities like BLOOD FRENZY, SCHIZOID makes the unique decision to focus almost entirely on Julie and her relationships with both her ex and her burgeoning romance with Fales, both of which are complicated by the mysterious threatening letters she receives from someone who clearly knows the group quite well.  While this gives us a good chance to develop the leading characters, it doesn’t give us much development to the would-be victims, and save for a suspicious repairman in the group played by Christopher Lloyd, none of the supporting cast gets much in the way of individuality before they end up on the wrong end of a scissors.

It’s a bit of a shame, too, as the stalking sequences are very well-done and manage to create some genuine tension.  Paulson has a good handle on building suspense and then releasing it with a genuinely comic moment (one inspired scene uses a questionable bit of racial paranoia before revealing an entertaining bit of subversion) and the cast is clearly game to play characters with a fair degree of depth.  Even the token investigating cops are more interesting to watch than usual, thanks to the casting of character vets Joe Regalbuto and Richard Herd, who can pull off charismatic performances in their sleep.  Craig Huxley contributes a strange score reminiscent of Jimmy Page’s oddball KRAAAANG-heavy music for DEATH WISH 3 that makes the film seem much weirder than it actually is. 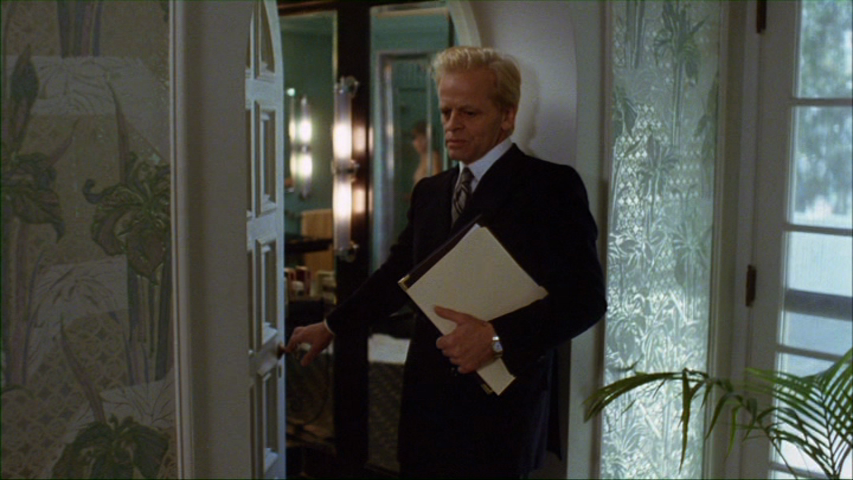 The most compelling part of SCHIZOID, however, is the sleazy relationship between Dr. Fales and his daughter, and Wilkes does an admirable job of countering a restrained Kinski with a performance that lives up to the twisted nature of the script.  Wilkes herself is featured in an interview on the disc, and it’s great to see her talk nonchalantly about both this film and ANGEL.  A theatrical trailer is also included.

Neither SCHIZOID nor X-RAY are amazing films on their own, but Shout Factory has done a fine job by pairing the two up into a solid package.  While it’s obvious from these films that Cannon never quite got a handle on what makes a great horror film, they’re still entertaining enough to sate the appetites of anyone jonesing for a good slice of slickly-produced ’80s slasher trash.  Once Golan-Globus found their footing in the action genre, they created a house style that couldn’t be beaten, and looking at this double bill, one wishes they’d stuck with horror a little bit more as well. 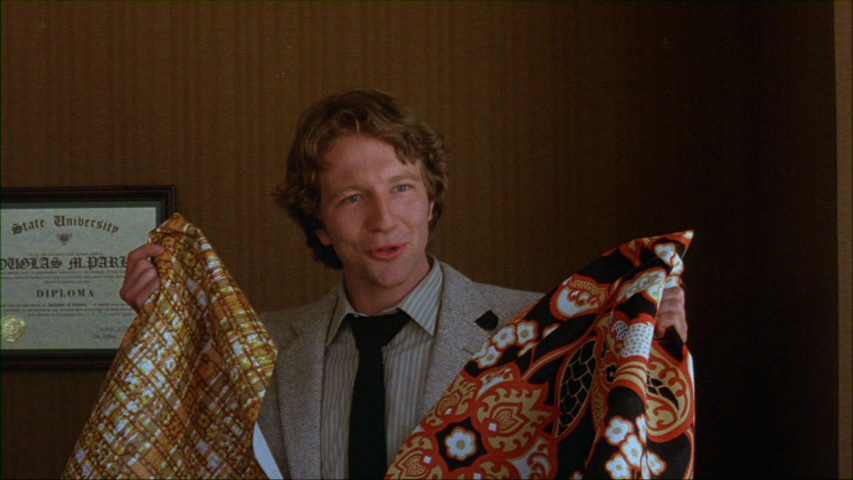