THE BODY SNATCHER is a testament to a great use of star power. Without Boris Karloff’s layered, flat-out creepy as hell performance, the film would be simply another of Val Lewton’s better-than-average, low budget horror films for RKO—handsomely done, but a little stodgy. With Karloff’s smiling psycho performance, it turns into a seriously twisted tale of psychological torture, revenge, class resentment, and men driven to madness by guilt. 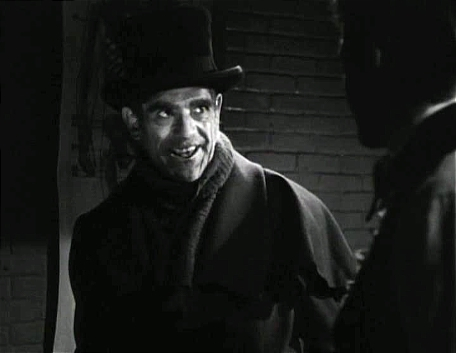 Set in Edinburgh in 1831, the film tells the story of the war of wills between respected doctor and professor of medicine MacFarlane (Henry Daniell) and grave robber Gray (Karloff). There is never any doubt that MacFarlane is buying bodies from Gray. What is teased out to suspenseful detail is why Gray regards MacFarlane with such sneering, sardonic contempt and just how many mean-natured jabs the doctor will take before he breaks. But what will happen when MacFarlane breaks and just what does Gray hold over his head (other than illegally buying bodies from him) that causes the man to alternately shrink away into a bottle or lash out in obvious guilt? 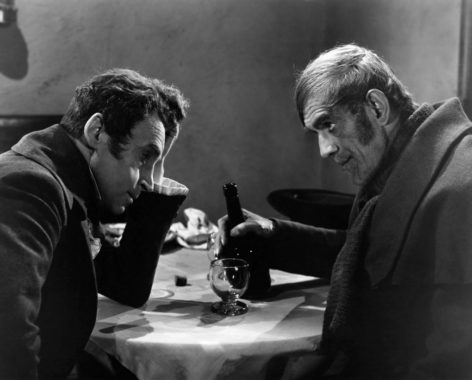 Given that the film takes place just a few years after the infamous Burke and Hare murders (their names are bandied about as possible former acquaintances of both MacFarlane and Gray), it is not surprising that the good Dr. MacFarlane might not be as morally upright as he appears. He certainly has a bedside manner that is less than charming as he berates a little girl for her inability to walk after what he deems should have been a successful surgery. And just why is he hiding his marriage to Meg (Edith Atwater), the woman posing as his housekeeper? For that matter, why is he so desperate to keep Fettes (Russell Wade), a young medical student, around as an assistant? There are no clear answers to some of these questions and Daniell is very good at projecting the constant angst of a man clearly trying to run from his past, but not knowing what he should be running toward. 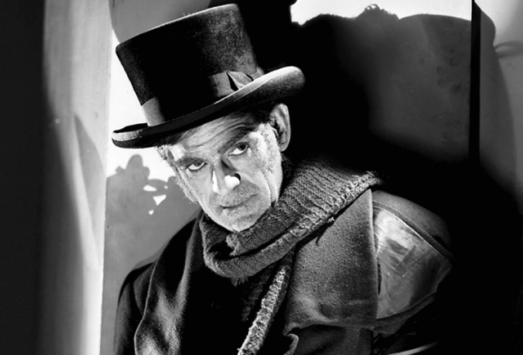 As good as Daniell is, Karloff is even better. While his career ranged from his time under heavy makeup to supporting character roles to villainous (and occasionally sympathetic) lead roles, Karloff never phoned it in. But when given a role of some substance, where he simply wasn’t being asked to play a purely evil heavy or henchman, you could see him rise to even greater heights for the material (see also: ISLE OF THE DEAD and TARGETS). While Gray is clearly the heavy here (not only does he take perverse joy in twisting MacFarlane into knots, he murders at least two people and a dog), Karloff gives him a strange sadness underneath his sadistic smile and sarcastic attitude. At one point, when Meg begs him to leave MacFarlane alone, he replies with a sinister smile, “He’s my friend. I like to see my friends.” Despite the sarcastic delivery, as the movie goes on, it becomes clear that Gray might actually believe this. These are two men who possibly did very bad things together in their younger days. All Gray seemingly wants is to get that version of MacFarlane back, partly for the purpose of proving that neither one is better than the other, but also because he misses what he sees as the good old days. This dynamic really pushes THE BODY SNATCHER into what could be considered an early example of obsessed stalker horror. 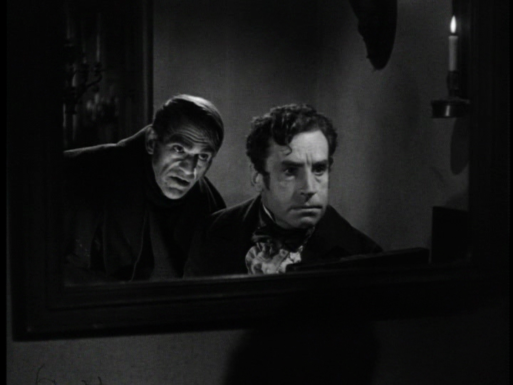 Beyond Karloff’s deeply unsettling turn, there is a lot for lovers of classic horror to enjoy here. Bela Lugosi has only a small part, but his one big scene is a show-stopper for the way he and Karloff play off each other and the turn it takes. Robert Wise’s steadily escalating direction delivers first a powerful climax to the MacFarlane and Gray storyline before hitting a bitterly ironic ending just a few minutes later. The script by Philip MacDonald and Lewton (using a pseudonym) is witty, efficient, and very dark—crafting a truly upsetting form of horror that is less about making the audience jump as it is about digging into the deep, ugly ways people can attack each other—and themselves. THE BODY SNATCHER is truly high quality horror that may be the best film (yes, even better than CAT PEOPLE) that came out of Lewton’s impressive run as a horror producer at RKO. 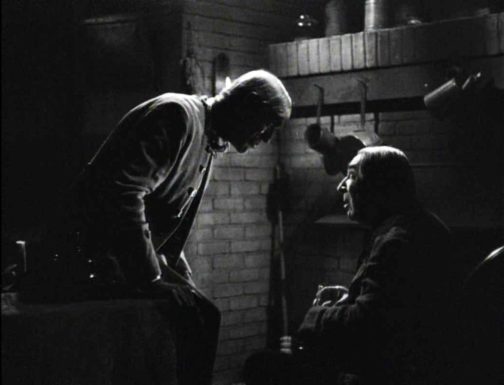 The Blu-ray presentation of THE BODY SNATCHER is taken from a new 4K scan of the original camera negative. Simply put, a movie that was released 74 years ago really does not have any business looking this good. For a movie that needs several moody night scenes to work, this presentation is amazing as shots of one of Gray’s victims disappearing into a dark tunnel and the final reveal at the end need inky blacks to intrude on the characters. It really is impressive how the film looks like it could have been shot yesterday.

An audio commentary from a previously issued DVD consists of Wise mostly discussing working for Lewton takes up the first half of the movie before film historian Steve Haberman takes over for the second half and mostly concentrates specifically on THE BODY SNATCHER. The two men are always informative, if slightly dry and occasionally repetitive. A documentary from the old DVD that covers Lewton’s time as a producer at RKO is generous and really covers a lot of ground, featuring an impressive roster of admirers that includes William Friedkin, Guillermo del Toro, and George A. Romero. A new documentary focuses in on THE BODY SNATCHER, digging into the difficulties and rewards of casting the ailing Karloff and the newly morphine-addicted Lugosi, while making the case that Wise and Lewton turned in a film that should be considered a horror classic today. It’s hard to argue with this sentiment. 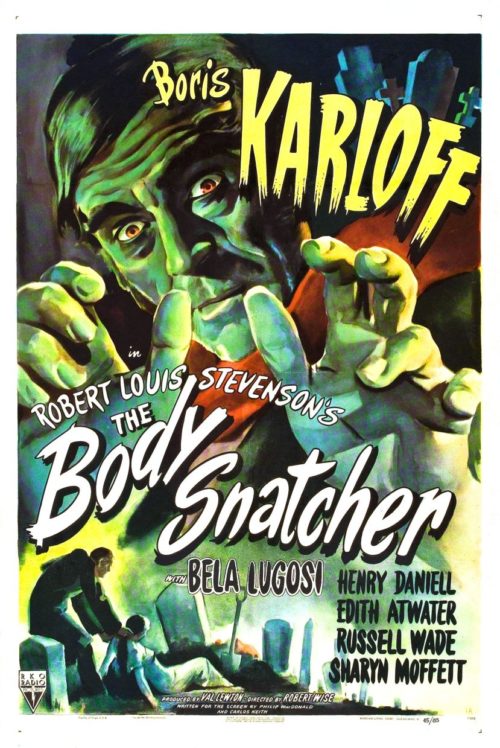 THE BODY SNATCHER is one of the finest horror films of the ’40s. It is such a pleasure to see Scream Factory reach further back into the past than they usually go to give this semi-forgotten classic a chance to be appreciated by modern audiences.

THE BODY SNATCHER Blu-ray is now available from Scream Factory.