Home  ⁄  The Wire  ⁄  ‘THE STREET FIGHTER’ TRILOGY COMES TO BLU-RAY IN ALL THEIR VIOLENT, UNCUT GLORY

Long a blind spot in my ever-growing love affair with exploitation movies, the new Shout Factory Blu-ray collection of THE STREET FIGHTER trilogy came along at a perfect time. What I found was a series of films that did not quite live up to their reputation for brutality (though the violence is plentiful), but did serve as a potent introduction of Shin’ichi Chiba (better known to U.S. audiences as Sonny Chiba) to the world beyond Japanese cinema.

In the aftermath of Bruce Lee’s tragic early death, studios in China, Hong Kong, and Japan were cranking out martial arts films at a tremendous pace, trying to find the next performer who could become an international star of Lee’s status. Two very different men emerged from the crowded field of martial artists turned actors, but both succeeded by carving out their own styles of acting, fighting, and stuntwork that were very different from what made Lee iconic.

Where Lee was intense, yet graceful, in his fighting and acting styles, Jackie Chan found fame by combining martial arts with comedy and death-defying stunts inspired by Harold Lloyd and Buster Keaton. With a karate style that made him look like much more of a bruiser than the elegantly fluid Lee, Sonny Chiba seemed to take more inspiration from the likes of Charles Bronson. Both men possessed rugged character actor faces that left them working in supporting parts for years (although Chiba had reached leading man status in Japan) before becoming international action stars at an age where most actors are considered over the hill. While Chiba was only in his mid-‘30s when THE STREET FIGHTER was made, that still made him older than Lee was at the time of his death. But though it took longer for Chiba to find the worldwide fame that he deserved, when he finally arrived on the scene, he did so with gusto.

In THE STREET FIGHTER series, Chiba acts and fights like a combination of a spoof of Lee’s intensity combined with a vicious ruthlessness that made him the perfect choice for the films’ vision of a violent antihero. Unlike the almost ballet-like movements of Lee, in these films, Chiba resembled more an erratic tornado careening through any obstacle he faced with deadly brute force that hid a subtly concentrated style. But what Chiba really had that was able to set him apart from the crowd of would-be successors to Lee’s crown was the ability to project a sense of humor that could be cruel and menacing or light and endearing. His fighting style might have appeared jagged and not as cinematic as most, but he had charisma to spare.

Of course when New Line Cinema bought distribution rights to THE STREET FIGHTER trilogy, Robert Shaye and company probably only cared about the (sometimes) cartoonish violence that would play well on grindhouse screens. No one could know that Chiba would have such crossover appeal that he would still be appearing in international productions to this day as an eighty-year-old. If for no other reason than skyrocketing Chiba to fame, THE STREET FIGHTER films deserve admiration. Thankfully, they still mostly hold up (especially the first two entries) as prime examples of the kind of ultra-violent martial arts film that packed them in on 42nd street in the ‘70s.

All three films more or less boil down to the same central idea: Tsurugi (Chiba) is the titular badass—an independent criminal who will do any job if the price is right. But like all classic antiheroes, he has a line he will not cross. That line usually involves working with organized crime, so in all three films he ends up working for those targeted by the really bad guys in the mafia. In doing so, he commits acts of ultra-violence in the service of doing (sort of) good (and sticking it to the metaphorical man). Along the way, he has a comic relief sidekick and flashbacks to the unjust execution of his father when he needs motivation to ignore injury and rise to the occasion of a fight against a worthy rival. All of this is played out to a propulsive, surf guitar-inspired score by Toshiaki Tsushima. The films adhere rigidly to this formula, but that is not necessarily a bad thing. It’s a sturdy plot construct on which to hang a series of fights that find wave after wave of henchmen getting violently dispatched by Tsurugi before he finally finds himself locked in mortal combat with the equally skilled main villain. 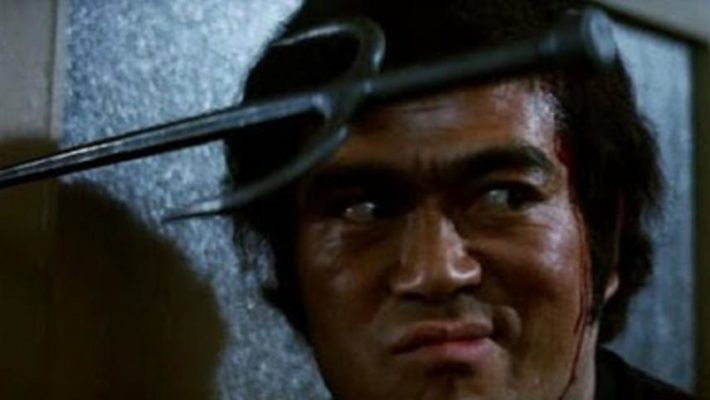 Like most movie formulas, there is a little wiggle room for director Shigehiro Ozawa to color slightly outside the lines—at least in the first film. Not only is the first film the most cartoonishly violent (throats are ripped out, a goofy “X-ray” shot shows how a fist crushes a skull, a would-be rapist has his balls torn off) in the series, it also features the meanest version of Tsurugi. The sequels gradually softened him into more of a straightforward hero, but THE STREET FIGHTER presents him a mostly remorseless criminal who thinks nothing of selling a woman who betrayed him into sex slavery. Granted, by the end of the film, that plot point comes back to bite him the ass, but it is still a startling moment that announces Tsurugi is really just as much of a villain as those he fights. This muddying of the moral waters makes the first film the most satisfying.

While all three films were released in Japan in 1974, it did not take long after the first film was completed for the producers to understand what they had. It should be no surprise then that the rougher edges were already being sanded off Tsurugi in RETURN OF THE STREET FIGHTER. The second film in the series, while featuring a slightly sanitized version of Tsurugi, still provides several jolts of brutal action (including one wonderfully silly, over-the-top sight gag) and a couple of interesting plot twists in the third act that show Ozawa was still pushing for at least a basic, but still plausible, story on which to hang the action. But while it is still a very good action film and features another physically bruising, slyly funny performance from Chiba, the formula is already showing signs of wear with extensive footage from the first film used for flashbacks and a documentary-like montage of karate students showcasing the use of different weapons and fighting styles to pad out the runtime.

By the time of THE STREETFIGHTER’S LAST REVENGE, the formula was no longer showing signs of wear–it was totally played out. Surprisingly, even Chiba appears to be phoning it in at times in the non-action scenes. The fights sequences, while still decently staged, lack the sort of over-the-top brutality of the first two films. Tsurugi is practically turned into a teddy bear this time while also given the out of nowhere skill as a master of disguise (complete with the silly sight of other actors supposedly pulling rubber masks off their faces to reveal they were Chiba the whole time). Even the story that should at least run like clockwork due to its close adherence to formula is sloppily put together with major characters being killed practically off screen as afterthoughts and a potentially interesting wrinkle of exploring government corruption by making the main villain a crooked prosecutor is ignored. It’s a shame that a franchise that delivered two such kinetic, entertaining films should just fizzle out the way it does here. LAST REVENGE is an adequate martial arts action flick, but given what Ozawa and Chiba achieved going into it, it’s a real let down of an ending.

While this set from Shout Factory is light on special features, it is notable for being the first time the films have been available uncut on Blu-ray. All three films are new 2K scans of original film elements from the U.S. theatrical cut with HD inserts from the Japanese versions included in the first two films and standard definition inserts on the final film. With the exception of the third film, the inserts are barely noticeable as being from a different source and the 2K scans that make up the bulk of all three films looks great. Ozawa had a great eye and sense of rhythm, so the presentation of these very good transfers really makes the superior first two films pop in their kinetic energy. 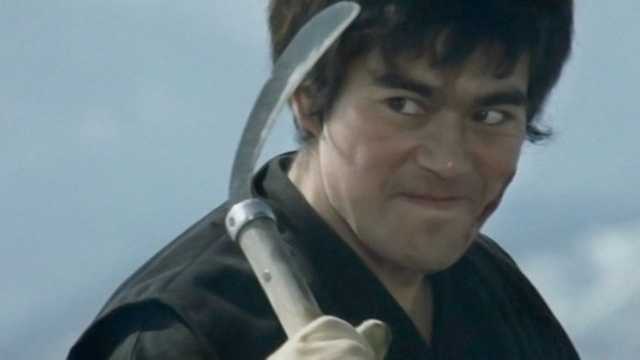 Chiba—looking ridiculously youthful for a man in his eighth decade—is warm, charming, and funny, as is expected. He comes across as ambivalent about the success of THE STREET FIGHTER films, understanding how they helped further his career and made him a legitimate worldwide action star, while claiming that he did not care at all for the sort of cruel, lethal karate performed in the films. It’s a fairly wide-ranging interview and well worth watching.

Sholder’s interview is brief, but fun as he recounts the early days of working at New Line Cinema when they were distributing John Waters films and oddities like REEFER MADNESS to college campuses. His focus here is on the process of cutting the trailer for THE STREET FIGHTER and how the screenplay for the English dubbing was less concerned with the actual plot and more about finding strings of words that fit the stressed syllables in an actor’s line reading (for example, Tsurugi is referred to as “Terry” in the dubbed version because his sidekick repeatedly calls him “partner”—which sounds very close to “Terry” in Japanese). Also notable in Sholder’s interview is the fact that New Line was responsible for giving Chiba the name “Sonny” in the film’s advertisements, not realizing the name would stick with him for the rest of his career—whether he liked it or not.

While I would have appreciated a commentary track from a film historian to give some context to the films, just having them look so good in uncut versions is really the best special feature possible. The third film may fizzle out, but the first two features showcase Chiba at his finest and the bone-crunching action is still impressive forty-five years later. This is a set that should please both longtime fans and newcomers—like myself—to the franchise. 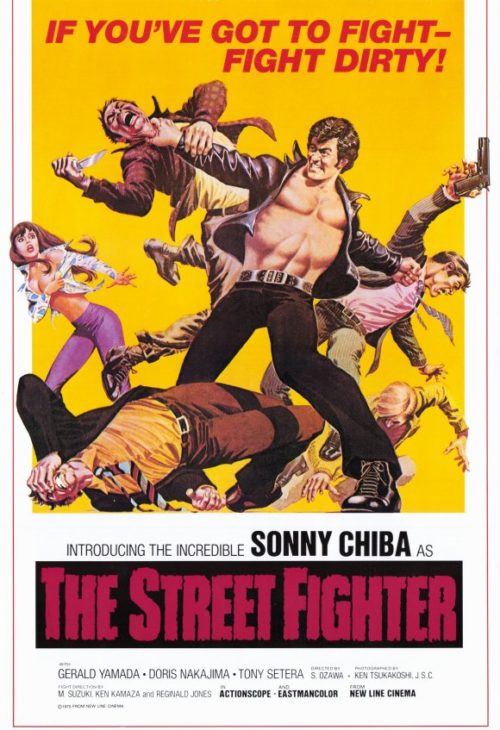