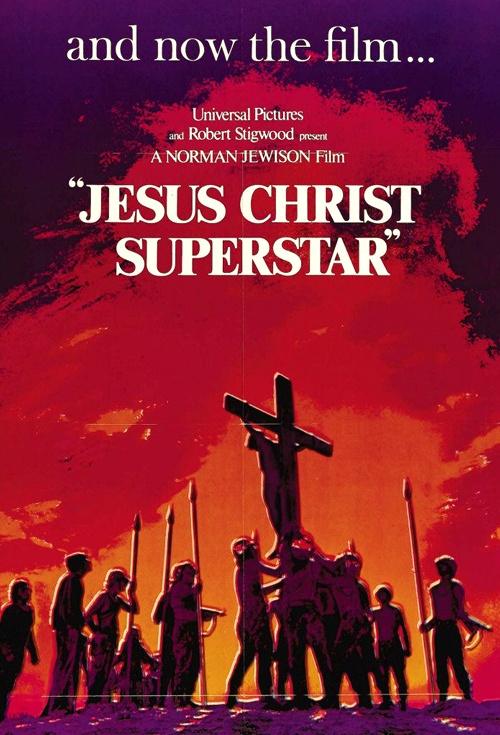 What makes JESUS CHRIST SUPERSTAR unique among movies based on stage musicals is that it really isn’t. Jesus Christ Superstar, the 1970 rock opera by Andrew Lloyd Webber (music) and Tim Rice (lyrics), achieved massive success as a double-LP before it was ever mounted on stage. That album isn’t a Broadway or London cast recording. The songs aren’t tied to dialogue that needs to be summarized in the liner notes; there’s not even a credit for a bookwriter or librettist. It’s simply an album, an entity unto itself. My parents had the album, with its gold logo on a brown background, and if you were born in the 1970s, yours probably did, too. It was Billboard’s top-selling pop album of 1971 and spawned what’s become a worldwide pop culture phenomenon. 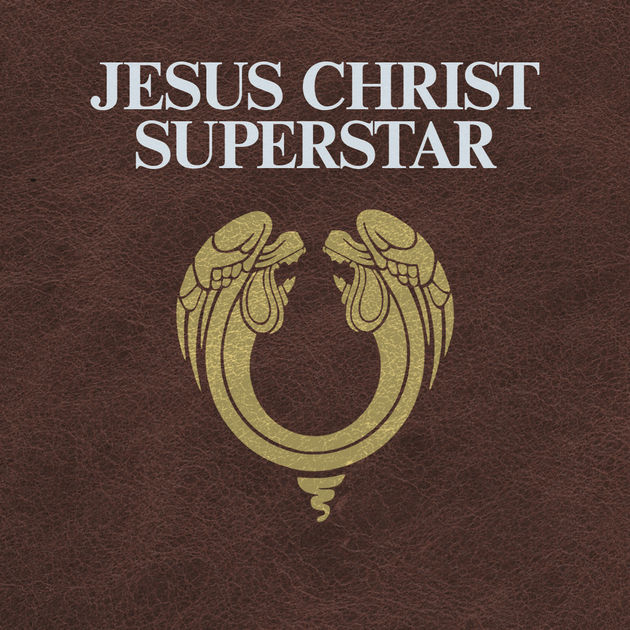 The success of the album made a stage production inevitable, and Jesus Christ Superstar debuted on Broadway in 1971. But, unlike the popular stage-to-screen adaptations that dominated the 1960s (WEST SIDE STORY, OLIVER, etc.), Norman Jewison’s 1973 film JESUS CHRIST SUPERSTAR was its own adaptation of the album, almost entirely divorced from what played onstage at the Mark Hellinger. Almost. The avant-garde (to say the least) aesthetic of the Broadway show was scrapped entirely. But Lloyd Webber and Rice had made some significant changes to the material when they adapted it for the Broadway stage, and much of the new material – along with some additional changes – was incorporated in the film. The movie was also heavily cast with veterans from the Broadway production, including Carl Anderson (Judas), Ted Neeley (Jesus), Yvonne Elliman (who also sang the role of Mary on the 1970 album), Barry Dennan (ditto, as Pontius Pilate), Bob Bingham (Caiaphas), and Kurt Yaghjian (Annas).

Jewison’s film may be unrelated to any specific production, but it inhabits a decidedly theatrical style of its own. As the film begins, a bus carrying a company of actors arrives at ruins that form a makeshift playing area. As the overture plays, they pile out of the bus in their street clothes and prepare to perform the rock opera Jesus Christ Superstar. The sequence sets up the film that follows perfectly. The props include modern-day firearms. The costumes are a mix of hippie-chic, army surplus, and leftovers from the MGM wardrobe department. There are no sets to be seen. As the overture reaches its climax, the actors are in full costume and makeup. About half of the company (the disciples) forms two circles around Ted Neeley, who will play Jesus Christ, while the other half (the Romans) looks on with either disdain or indifference. It resembles a rite of tribalism for the company of actors, while completing their transformation as characters whose story is centered on Jesus. The final shot of the overture is the main playing area, as the actors take their places. 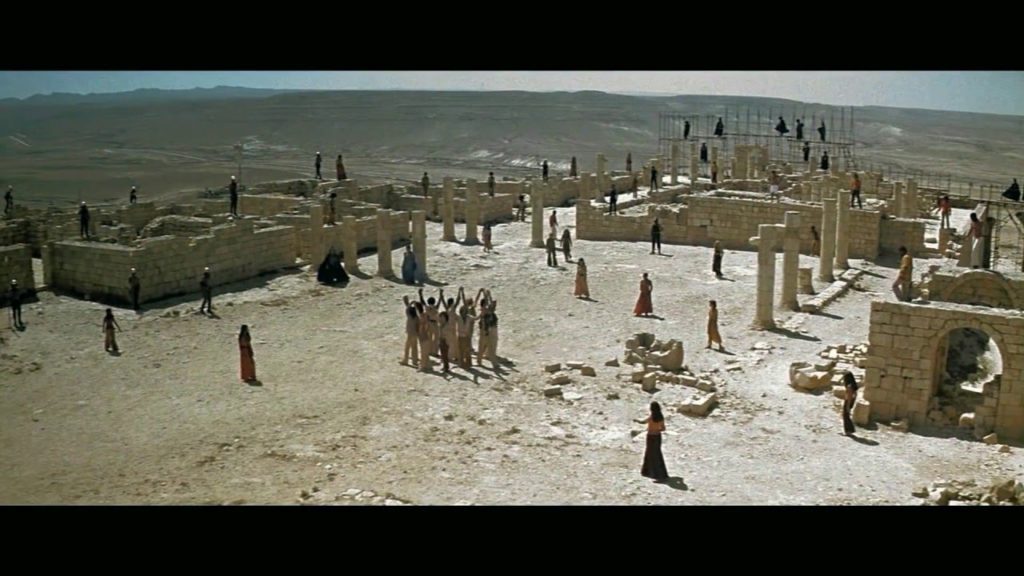 The one person missing from the final tableau is Carl Anderson. Already in character as Judas Iscariot, he leaves the scene as soon as the cross – as a prop, a symbol, and an omen – is lifted from the top of the bus, with a sense of reverence. Disgusted with the artificial nature of the pomp and circumstance surrounding Jesus, he storms off to be on his own. After the overture, Judas sets the narrative in motion with the first song, “Heaven on Their Minds.”

It’s at this point that you’re either with the film or not. You can accept that this is an anachronistic rock opera about the last days in the life of Jesus of Nazareth, told from Judas’s point of view, and performed by a multi-ethnic cast in the middle of the desert… Or you fold your arms over your chest, listen to the music, and wait for the damn thing to be over and done. The first time I saw JESUS CHRIST SUPERSTAR, I harrumphed my way through, and dismissed it as 1970s crap that made too many change to an album I adored. But I was a kid from a farm town who had no real concept of New Hollywood cinema, rock and roll, or camp. As is the natural order of things, I didn’t truly appreciate everything the film had to offer (New Hollywood cinema, rock and roll, camp) until college. I’ve seen it dozens of times by now and I love it. Even with its flaws, I think it’s the best possible movie that could be made of Jesus Christ Superstar.

The conceit of actors putting on a show isn’t touched on again until the eleven o’clock number, “Superstar.” Judas, who committed suicide after betraying Jesus to the Romans, is lowered to a platform on a silver cross by a visible crane. He’s an angel, dressed in white with wings of fringe. As the song progresses, he’s backed up by a trio (the Soul Girls), a heavenly choir of angels (also in fringe), and the Apostles (also in white). By the end of the number, spotlights are visible, the edit cuts faster, and the camera angles more extreme. Any pretense of a time period other than right now is abandoned.

And as the song reaches its fever pitch, the “concert footage” is intercut with Jesus being led to the cross. The music stops abruptly and, well, you know what happens next. After all is said and done, the company, back in their street clothes, reboards the bus and heads home. It’s a powerful ending, tying the ancient story together with the resonance it still has on a modern audience.

And while we’re on the subject, that company of performers is outstanding. Josh Mostel (Herod), Larry Marshall (Simon), and ten-time AVN Award-winner Paul Thomas (Peter, under the name Philip Toubos) round out the cast of principles listed above. Carl Anderson’s Judas has never been equaled. Ted Neeley delivers thrilling vocals as Jesus and his chemistry with Anderson is what drives the film. Yvonne Elliman is so identified with the hit “I Don’t Know How to Love Him” that it’s almost impossible to imagine anyone else in the role. Here are the three of them in the show’s best song, “Everything’s Alright.”:

I could write volumes on Jesus Christ Superstar and JESUS CHRIST SUPERSTAR (and given a grant, I would!). I focused on the movie’s presentation of the material for this column because that’s what struck me the last time I watched the it (last Saturday) (and then Monday). To date, there are 127 recordings of Jesus Christ Superstar indexed on castalbums.org, in 15 languages, not to mention the dozens of live bootlegs circulating in the fan community.  When the album debuted in 1970, it was banned from the BBC for being sacreligious. Tomorrow, a new production, Jesus Christ Superstar: Live in Concert will be aired live on NBC for Easter Sunday, featuring John Legend (Jesus), Brandon Victor Dixon (Judas), Sara Bareilles (Mary Magdalene), and Alice Cooper (Herod).

And the world goes ‘round. 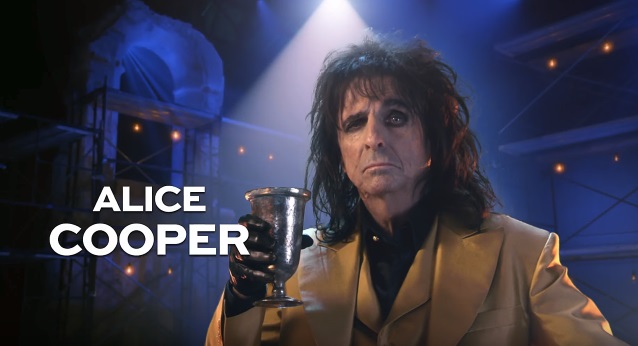