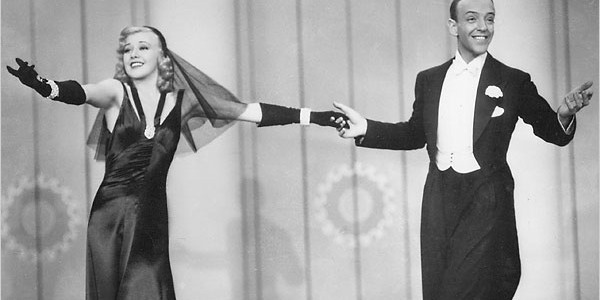 Regardless of where your personal political beliefs lie, this is indeed a confusing time to be an American. Need an example? Roberto Aguirre-Sacasa has rebooted the Archies as TV noir, and it’s actually good. How is one to cope in the face of such madness? The same way one copes with anything: through the magic of song and dance!

Let’s begin the old-fashioned way, with Fred Astaire and the Gershwins.

I have no extra insight to add here, it’s just a great number. The cast is on ocean liner and Fred Astaire is hiding from his manager in the ship’s improbably pristine Art Deco engine room. The rhythm of the ship’s machinery prompts Dudley Dickerson and the crew into the opening verse. After their dazzling vocal work, Astaire picks up the song and runs (well, taps) with it. There are several Astaire numbers (with and without Ginger Rogers) that I could have used here, but the opening lyrics of “Slap That Bass” capture the spirit of dancing your blues away so perfectly (each “zoom” is the pluck of an upright bass):

The world is in a mess.

With politics and taxes

The future doesn’t fret me

If I can only get me

Some to slap that bass.

Ira also slipped in this curiosity:

Dictators will be better off

If they zoom-zoom now and then…

“Slap That Bass” is paid tribute in DANCER IN THE DARK, when Björk takes a page from the Astaire/Gershwin playbook:

Selma (Björk) has a genetic condition that is slowly causing her to go blind. But the uplift she finds in Busby Berkeley musicals (more on those below) influences how she perceives the rest of her life. Selma sees and hears music in everything – much in the same way the crewmen hear rhythm in the engine machinery in “Slap That Bass” – and turns the world around her into a musical to escape her own unhappy reality.

They greet you and say

We tap out a rhythm

And sweep you away

SHALL WE DANCE and DANCER IN THE DARK use songs in the manner of most musicals, where characters break into song to express their emotions. But that’s not the only way to make your movie sing. When your story is about performers, the artifice of breaking into song out of pure emotion is dropped. The actors are singing onscreen because the characters are singing onstage. You couldn’t tell Loretta Lynn’s life story without the songs in COAL MINER’S DAUGHTER, after all. My next two examples come from master directors who used songs realistically to great effect.

Robert Altman’s NASHVILLE climaxes at a political rally. One of the headliners is shot by an audience member and chaos erupts. As the wounded singer is carried off the stage, Albuquerque (Barbara Harris), picks up the microphone and starts singing “It Don’t Worry Me.” She’s very quiet at first, and these are the lyrics you miss:

They say this train don’t give out rides

Well it don’t worry me.

And all the world is takin’ sides

But it don’t worry me.

Cause in my empire, life is sweet

Just ask any bum you meet

And life may be a one way street

But it don’t worry me.

Slowly, she’s joined by the other acts that were getting ready to perform at the rally: first a band picks up the licks, then a gospel choir adds harmony, and finally the audience begins to sing along. They find solace in the song and in each other. They’ve just witnessed a tragedy, but life is full of tragedies and the only choice you have is to go on living, a theme not uncommon to country music.

CABARET on the other hand, takes that idea to its ultimate conclusion:

Some of the power of “Cabaret” has been muzaked out of it over the years. But pay attention to the middle part, and you’ll hear all about Elsie:
The day she died the neighbors came to snicker,

“Well that what comes from too much pills and liquor.”

But when I saw her laid out like a queen,

She was the happiest corpse I’d ever seen.
Now, CABARET takes place in Berlin during the rise of the Third Reich, when it takes more than American-grown bootstrapping to convince yourself that everything’s going to be fine. Hence pills, liquor, happy corpse. Before she takes the stage to sing, Sally has said goodbye to her British boyfriend Brian. He can see what’s about to happen in Germany as the Nazis gain power and wants Sally to join him as he gets the hell out of town. But she stays. Because you can accept life for what it is, or you can make your mind up to go like Elsie.

Or you can fight back. And I’m still talking about Nazis.

This is one of the greatest things to ever happen to a show tune. Neither “The Lambeth Walk” nor the musical Me and My Girl had anything to do with Nazis. It was just a very popular, very catchy song-turned-dance-craze that made its way across the channel to the rest of Europe. And then, in 1939, a member of the Nazi party decried it as “Jewish mischief and animalistic hopping.” I don’t know if the Nazis’ denouncement of the song directly inspired what happened next, but in 1942, Charles A. Ridley of the London Ministry of Propaganda edited footage from Leni Riefenstahl’s TRIUMPH OF THE WILL to sync up with the mischievous little ditty (back when you actually had to cut the film and tape it together by hand). The result, as you can see, is a work of subversive genius.

Social commentary wasn’t anything new to musicals on stage by 1942, of course. It wasn’t even new in 1933.

Director/choreographer Busby Berkeley made a big splash in 1933 with the hattrick of 42ND STREET, GOLD DIGGERS OF 1933, and FOOTLIGHT PARADE. None of these films shied away from the reality of the Great Depression, and they all contained some element of social commentary. But Berkeley and songwriters Harry Warren & Al Dubin never created anything as overtly political as “Remember My Forgotten Man.” The “forgotten man” refers to unemployed World War I veterans  during the Depression, and the song is a response to the Hoover administration’s treatment of the Bonus Army, a 1932 march of World War I veterans on Washington, DC (in short: Hoover called the army to evacuate its own veterans and burn down their camp). In the film, the song is described early on: “Men marching in the rain… and in the background will be Carol [Joan Blondell], spirit of the Depression… this gorgeous woman singing the number that tears your heart out… [over] the big parade of tears” (screenplay by James Seymour, David Boehm and Ben Markson). The lyric is direct, set over a march in a minor key:

You put a rifle in his hand

You sent him far away

But look at him today

The combination of music, lyrics, cinematography, performances, etc. is devastatingly effective. I wept the first time I saw it (not that it’s hard to make me cry during a movie) and it still gives me goosebumps.

…and that’s why I love musicals.