This review contains spoilers for YETI: A LOVE STORY.

The current state of independent filmmaking is a strange and wondrous place. As digital cameras, editing software, and sound equipment have become higher in quality and cheaper to own, nearly anyone with a dream of making a film can make that dream a reality. The downside of this development is that there are a bunch of yahoos running around with cameras, but no story ideas, slapping together seventy five minutes worth of bad acting, listless action, and fleeting glimpses of nudity and calling it a movie. The independent film market is routinely flooded with these movies cluttering up Netflix and the Blu-ray shelves at the increasingly rare stores that still sell physical media. At first glance, it would appear that 2008’s YETI: A LOVE STORY and its 2017 sequel ANOTHER YETI A LOVE STORY: LIFE ON THE STREETS would fit into that category. That first glance would be wrong.

I am not saying that these films are unsung masterpieces of cinematic brilliance. What I am going to claim is that while the first movie’s production values were as amateurish as one would expect from that title, between the absurd story, near-constant barrage of tasteless jokes, mocking of romantic comedy clichés, and gratuitous gore & nudity, it merited being picked up for distribution by Troma. That bit of good luck for the filmmakers translated into just enough of a reputation for their film to produce a more polished sequel that improves on its predecessor across the board.

ANOTHER YETI A LOVE STORY: LIFE ON THE STREETS returns co-writer/directors Adam Deyoe & Eric Gosselin and co-writer/producer Jim Martin behind the camera and—considering the lengthy time between productions—surprisingly brings back three of the cast members from the first film. That consistency in casting and storytelling accounts for the film’s high hit-to-miss gag ratio and just straight-up weirdness. 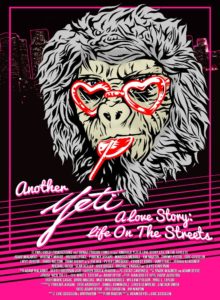 LIFE ON THE STREETS picks up a few years after the events of YETI: A LOVE STORY. Adam (Adam Malamut) and Dick (David Paige), two of the survivors of the battle with a sadistic cult of yeti worshippers from the first film, have moved to Los Angeles. Adam has given birth to the yeti baby he was pregnant with at the end of the first film. Baby Yeti Eddie—as he is referred to by Adam—is apparently at toddler stage, but who can tell when it is simply an unconvincing puppet covered in white fur? Having never gotten over the death of his yeti lover in the first film, Adam is in an unfulfilling relationship with Alistair (Michael Price), a paraplegic man who considers being paralyzed to be the best thing that ever happened to him.

Dick has his own problems. Unable to maintain a consistent sex life since he fell in love with a member of the yeti cult who he eventually killed in the first film, Dick treats his current girlfriend Linda (Whitney Moore) with open contempt, making him even more of a jerk than he was in the first film. 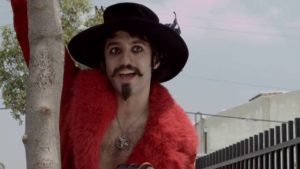 When oily villain Pimp Billy Faunz (producer/writer Martin) kidnaps Baby Yeti Eddie, Adam and Dick spring into action—sort of. Despite being the protagonists of the film, they are still horrible people and find time to get distracted by potential new interests, including a yeti prostitute who may be the key to tracking down Pimp Billy—but not before Adam helps rehabs him from heroin addiction and engages in a sex scene that seems to take up a good chunk of the second act.

The plot of LIFE ON THE STREETS is surprisingly convoluted for a film that is primarily a delivery system for dick jokes. Not only is Pimp Billy a sleazy criminal, he has an evil plan of creating a race of yeti clones for a vague nefarious purpose. When most of those clones emerge from the womb malformed, they are tossed into a fetus shredder—which looks and operates exactly how you would imagine. The disgusting character of Sex Piss (co-writer/co-director Gosselin), returns from YETI: A LOVE STORY, despite ending that film stabbed in the stomach so many times that his intestines were hanging out. This time around, he gets to make out with his clone and manages to avoid most of the violence while working a menial job for Pimp Billy cleaning up the “jack off booths” at a strip club. There is even a time travel subplot, a cameo by Lloyd Kaufman, and a cliffhanger ending. 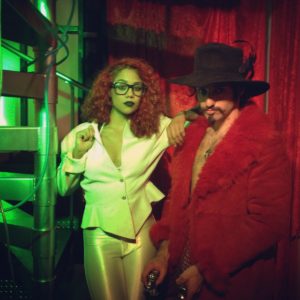 Is any of this extra plotting really necessary for a silly comedy about saving Baby Yeti Eddie? Of course not. But I appreciated the effort put into making the film as whacky and casually offensive as possible. The filmmakers clearly understand that being boring is absolute death for a film like this. Having watched too many dreadfully dull micro-budget exploitation films over the last ten years, I was simply happy to find myself laughing along with the filmmakers rather than constantly checking my watch. 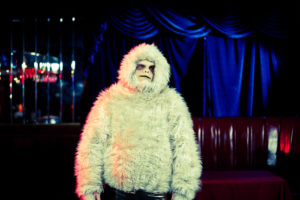 And that is really the best thing about LIFE ON THE STREETS. You cannot judge it by any normal standards of film criticism. All that matters is getting the laugh. It achieves that goal with ease, even though I was slightly ashamed to find myself laughing at gags that should have stopped being funny when I was in middle school.

ANOTHER YETI A LOVE STORY: LIFE ON THE STREETS is now available on several digital platforms.