Home  ⁄  The Wire  ⁄  BUMP AND GRINDHOUSE: The World of Psychotronic Musicals hits Golan-Globus’s ‘MACK THE KNIFE’

This is my first piece for DG, and what better way to begin anything than with a Golan-Globus opus?

MACK THE KNIFE is Menahem Golan’s 1989 adaptation of Bertolt Brecht and Kurt Weill’s musical The Threepenny Opera. Threepenny debuted in Berlin in 1928 (originally titled Die Dreigroschenoper), becoming a sensation in Europe. The American premiere in 1933 was considerably less successful, lasting a mere nine performances. Threepenny (and “Mack the Knife”) didn’t become a hit stateside until 1954, with a now-legendary Off-Broadway production that featured a new translation by Marc Blitzstein, composer-lyricist-author of The Cradle Will Rock, which had its own legendary premiere in 1938 (more on him in a bit)..

“Mack the Knife” is one of those songs that’s become so ubiquitous in pop culture that you may not know that you know it. Bobby Darin and Ella Fitzgerald both earned Grammys for their recordings, and the song has been covered by everyone from Louis Armstrong to Lyle Lovett to Marianne Faithful. McDonald’s turned it into a jingle to sell McDLTs. Hell, even Dee Snider included it on his Broadway album.

The song’s enduring popularity is both unsurprising and remarkable. Unsurprising because it’s just a damn good song (I’d be more specific about the song’s inherent musicality, but neither of us would know what the hell I was talking about). And remarkable because… have you ever paid attention to the lyrics? They describe the crimes of a serial killer. Maybe you miss it because the first two choruses couch everything in shark metaphors, but it’s right there in the third one:

On the sidewalk Sunday morning
There’s a body oozing life.
Someone’s sneaking ‘round the corner.
Is the someone Mack the Knife?
(Lyrics by Bertolt Brecht, translated by Marc Blitzstein)

By the end of the song (if you include all ten choruses), Mack the Knife has killed three more men, stabbed a woman, raped a girl, burned down a market (killing 20 more), and banged at least four ladyfriends. I’m spending a lot of time on this song because it sets up the rest of what follows. “Mack the Knife” (the song) describes Mack the Knife (the man), and establishes the tone for MACK THE KNIFE (the movie). 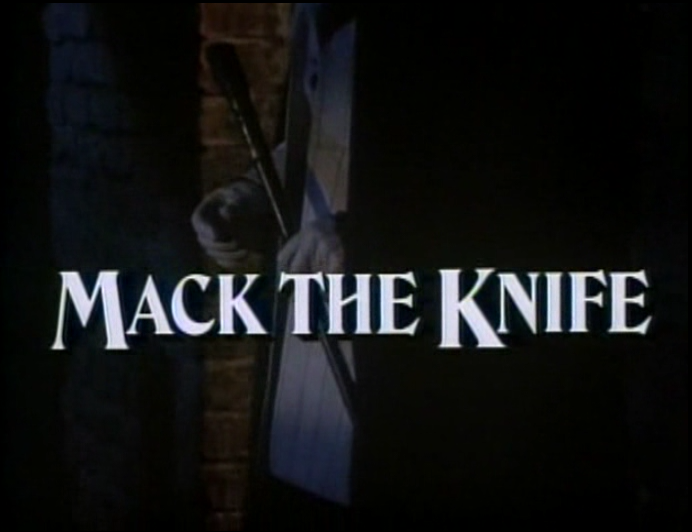 Before we get to the film, a quick note about Marc Blitzstein: Blitzstein’s impact on the success of Threepenny in American is inestimable. There have been other English-language translations claiming to be more faithful to the spirit of Brecht, and while that may be true, these later translations were not written by songwriters, and the lyrics don’t sing with the ease of Blitzstein’s. Steven Suskin went into more detail in his 1997 book More Opening Nights on Broadway:

Blitzstein was not a literary academic; he was a composer, a man of the theatre, a colleague (and competitor) of Weill and – most important – an accomplished lyricist who could complement Weill’s music. The foundation of Threepenny Opera’s modern-day reputation is “Mack the Knife.” Not just the song lyric, but the song itself. And these are Blitzstein’s words. Yes, Brecht called his character Mackie Messer, and messer is indeed the German word for knife, but it was Blitzstein who came up with the streetwise sobriquet that gives old Mack a bigger-than-life infamy (like Jack the Ripper or Billy the Kid).

And on to the movie we go…

The movie, like the musical, opens with the song “Mack the Knife,” led by the Street Singer (Roger Daltrey), the whore Jenny (Julia Migenes), and a chorus of whores and beggars. The story begins in London, 1837, days before the crowning of Queen Victoria. The criminal Mack the Knife (Raul Julia) has seduced the virgin Polly Peachum (introducing Rachel Robertson), and they elope, much to the chagrin of her parents (Richard Harris and Julie Walters). In revenge for unvirgining their underage daughter, Mr. and Mrs. Peachum vow to turn Mack in to the police and collect a reward for their efforts. Mrs. Peachum pays off Jenny (Mack’s favorite whore) to betray him on his next visit. Mack is arrested, escapes (with the help of his other wife, Lucy (Erin Donovan)), and is arrested again, sentenced to be hanged. But he’s saved at the last minute by Roger Daltrey and everyone gets a happy ending.

The ending doesn’t make any more sense seeing it than it does reading about it.

MACK THE KNIFE was preceded on film by at least three Threepenny adaptations before Golan-Globus came along. G.W. Pabst filmed German– and French-language versions simultaneously in 1931. Wolfgang Staudte gave us another German adaptation in 1962 (released in the US in 1964, dubbed into English and with interstitial bits featuring Sammy Davis, Jr. inserted throughout, as was the style at the time). With songs like “Mack the Knife” and “Pirate Jenny,” and its endlessly relevant satire of corruption and class inequality, it has become a mainstay on the world stage, an internationally recognized classic of musical theatre. The show is revived every 15 years or so on Broadway, and is performed every 15 minutes or so in colleges, so why not a new movie in 1989?

Why not indeed. But first, I gotta tell ya, I love The Threepenny Opera. Seriously. I have ten recordings of the score. I once sang “Barbara-Song” in a talent show. I even named my cat Macheath (Mack’s given name). And I really wanted to love MACK THE KNIFE. It has all the elements of a good genre film: a crime lord hero, the virgin he corrupts, her scam artist parents, crooked cops, deceit, treachery, and lots and lots of whores. It’s based on one of my favorite musicals, it stars Raul Julia, and it’s from the director of THE APPLE! 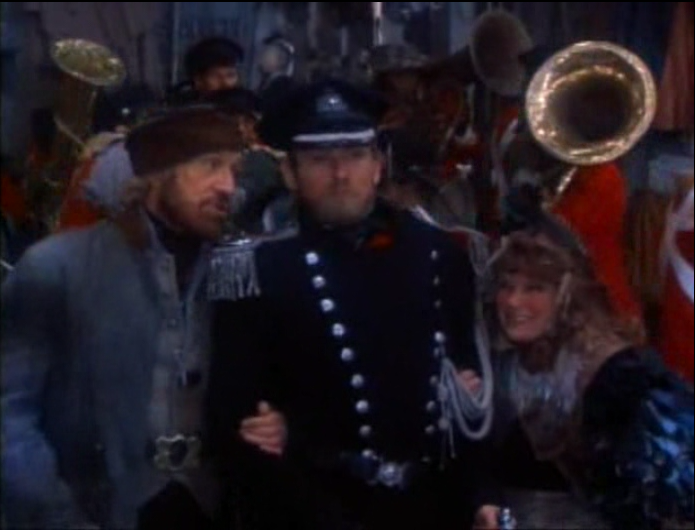 So why is it so uninteresting?

In a word: Menahem Golan. Menahem Golan directed, he wrote the screenplay, he co-executive produced, and he wrote lyrics. Not all of them, mind you. A good 80% of the lyrics heard in MACK THE KNIFE are Marc Blitzstein’s. But the rest are the work of Golan and musical director Dov Seltzer. Being the fan of Blitzstein that I am, re-writing his lyrics is particularly galling to me. Or it would be, if I expected better of Menahem Golan. Which I don’t. No single aspect of this movie was too good to escape Golan’s handiwork, and his limitations as a writer/director/producer/lyricist/non-egomaniac are evident throughout. (On the plus side, it’s not usually this easy to blame a single person for an entire movie’s shortcomings.)

At least he (mostly) got the casting right. Raul Julia had already played Mack on Broadway in 1976, picking up a Tony nomination for his efforts. Julia was a terrific actor, and he is perfectly cast as Macheath, embodying all the charm, charisma, and sexual swagger that we expect of the man described in “Mack the Knife.” Richard Harris and Julie Walters come off just as well, neither leaving any piece of scenery unchewed. Julia Migenes is outstanding as Jenny, singing beautifully and owning the screen whenever she appears. Jenny is a prostitute in love with a man (her former pimp!) who will never be true to her, but she is never ashamed or self-pitying. Migenes plays her with a regality that dares you to look down on her. 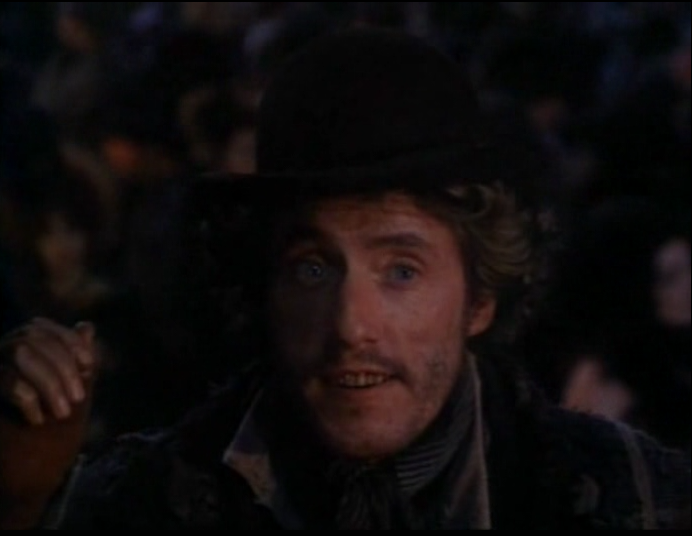 And the cast certainly has their work cut out for them. The Street Singer, for example, usually opens the show with “Mack the Knife” and then doesn’t appear again until the epilogue, with one final chorus about our Mackie. The role has been expanded here (to give Daltrey more screen time?), so he pops up throughout the film, offering commentary and exposition. It’s a fine conceit that would have worked much better if he wasn’t speaking entirely in rhymed couplets. And despite what I wrote above about Raul Julia’s performance, at first I was surprised at how uninspired it seemed. How could a man whose work in STREET FIGHTER is the stuff of legend play such a wan Mack the Knife? And it slowly dawned on me that Julia was indeed giving a terrific performance; I just didn’t notice because it was so poorly filmed.

But the biggest problem with MACK THE KNIFE is the songs. And in a musical, that’s a helluva big problem. Aside from Julia, Daltrey, and Migenes, no one in the cast is an especially strong singer. Walters and Harris work well within their limitations, but neither has the vocal chops to give the score its due, which is a very nice way of saying that Richard Harris should never have been allowed to sing in public, in CAMELOT, or anywhere else. Both Robertson and Donovan are hit and miss with the pitch, missing a lot of high notes, and we end up with two soprano roles sung by two decidedly non-sopranos (well, one non-soprano and one non-mezzo). 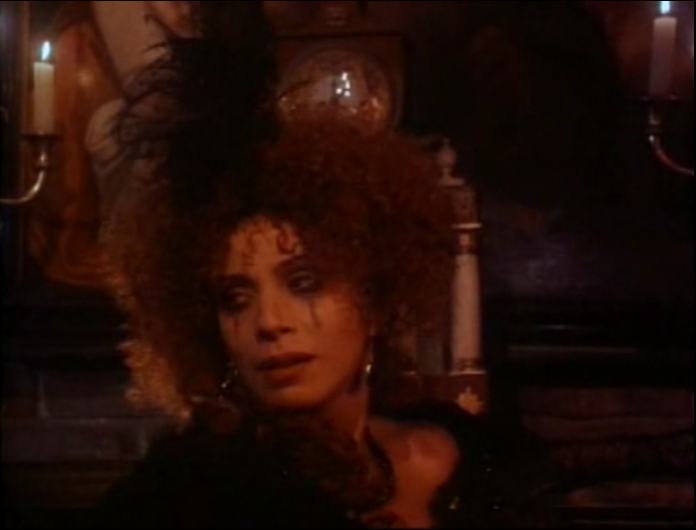 Even if it was better cast, we’d still be at the mercy of the “improvements” to the source material. Take “You’d Better Use Your Head,” (aka “Useless Song”). In Threepenny, it’s a pretty straightforward number about the futility of living, sung by Mr. Peachum. But that wasn’t good enough for Golan & Seltzer, who added verses for Mrs. Peachum, the police commissioner, a children’s chorus, Jenny and the whores, a line of clergymen, some random thieves, and the Street Singer, plus one final chorus for the everyone, including the hundred or so extras he crammed onto the screen. And the horses. There’s also horses.

Now, I love a great big musical number as much as any show queen, but this one makes no damn sense. For one thing, this is the only time in the entire movie where we see the children’s chorus. Who are these kids? Same deal with the thieves. And the clergy. Yes, one of the priests showed up at Mack & Polly’s wedding, but he didn’t stick around to actually perform the ceremony (come to think of it, no one did). Golan clearly had a point he wanted to make, and he made it (and made it and made it and made it…). But the effect isn’t really worth the effort.

So MACK THE KNIFE doesn’t work as a musical. It doesn’t work as a crime story either, since both the crooks and the cops are too buffoonish to be taken seriously. There are a few enjoyably campy moments: Mack’s two wives meet while visiting him in prison and proceed to beat the crap out of each other while singing “Jealousy Duet” and it is awesome; and Migenes’s “Pirate Jenny” is filmed as one of the 1980s-est music videos you’ve ever seen. But for the most part, the film is just good enough to be good enough, and nothing more. 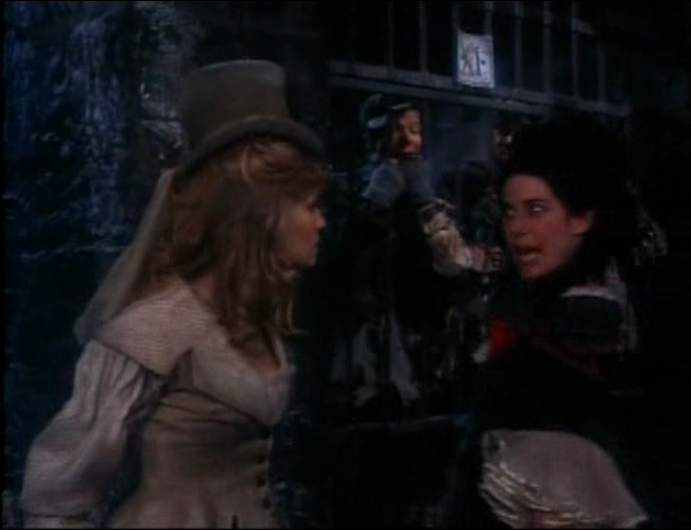 And that’s where the canker gnaws. Because THE APPLE isn’t an especially good movie either, but it’s endlessly entertaining because it believes so wholeheartedly in its own insanity. (I’m not going to try and describe THE APPLE here. Just watch it. You’re welcome.) That spirit is what’s missing from MACK THE KNIFE. Well, that spirit and the nine songs on the soundtrack album that didn’t make the final cut of the film, but I digress.

I’m hoping to turn this into a regular column here, revisiting the forgotten, ignored, and misunderstood psychotronish movie musicals out there. I’ve got a few ideas for future titles in the hopper, but if you have any suggestions, leave them in the comments!

Fun Fact: The man in the Mac Tonight costume in the McDonald’s commercials was none other than Doug Jones, of PAN’S LABYRINTH, the HELLBOY movies, and the Buffy episode “Hush.” (Thanks Wendi Freeman for that bit of info!)