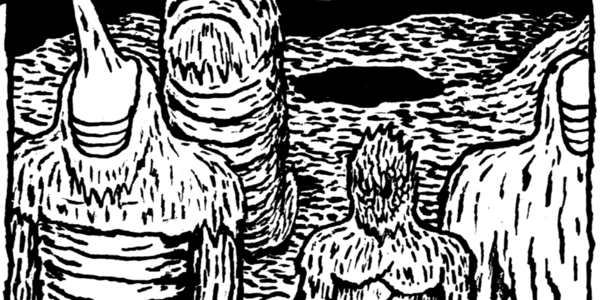 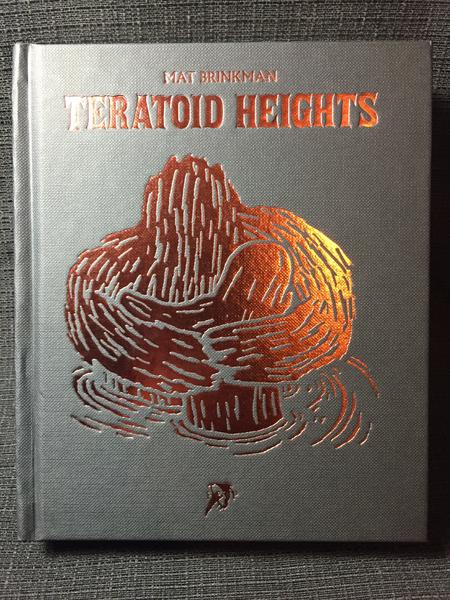 As a critic — particularly a critic of “underground” and/or “avant-garde” comics — sometimes you’re called upon to attempt to describe the utterly indescribable. This is a good thing — at the very least it expands one’s vocabulary, sometimes even one’s consciousness — but it’s by no means an easy thing. And there’s no greater challenge than attempting to convey, in terms anyone can understand, something of the unique spirit, character, and aesthetic sensibility of Mat Brinkman’s comics.

One of the co-founders of Providence’s legendary Fort Thunder cartooning collective, Brinkman himself is something of an enigma these days, having abandoned comics for music and maintaining no online presence whatsoever, but his work is just as tantalizingly mysterious, and Hollow Books’ recent re-issue — in handsome cloth-bound and foil-embossed “Museum Editons,” no less — of two of his classic comic-strip collections, Teratoid Heights and Multiforce, offers audiences new and old the ability to experience his justly-legendary creative output in a fairly accessible (if expensive) package for the first time in what seems like forever. For the sake of brevity we’re going to concentrate merely on the former book here, collecting material created and originally published between the years of 1995 and 2001, but both are essential purchases if you can fit ’em in the budget, so there’s me violating the cardinal rule of criticism by giving you the final verdict right at the outset. 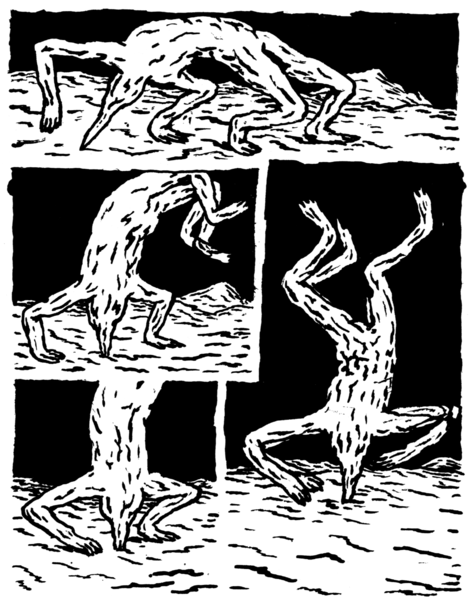 Still, explaining why the work collected between these covers is so highly-regarded is my main charge here, and fair warning: It may just be beyond my meager facility with words to be able to pull it off. I’ll give it the old “college try,” rest assured, but know going in not to expect a miracle.

Brinkman himself certainly needs very few — if any — words to communicate his singular worldview, taking us on a guided tour through the caverns and hills and waterways and ever-shifting plateaus of his comprehensively-imagined environment and its even-more-comprehensively-imagined denizens by means of a viewpoint that is at once omniscient and deeply intimate, clinically removed and almost painfully personal. If a glue-huffing teen were mystically imbued with the sense of holistic purpose that’s usually the province of only the most masterful of visual storytellers, the end result might be something like this, but even then that might be a reach, as there’s quite simply nothing else “like this” at all. 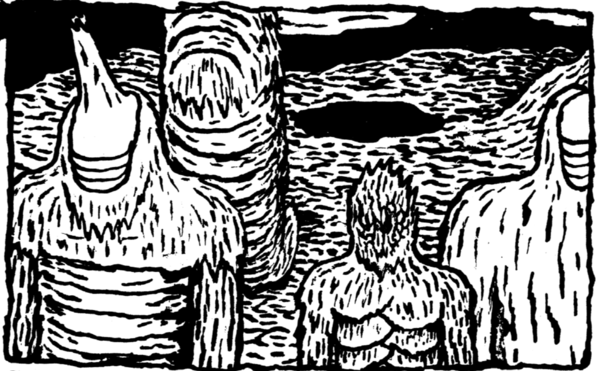 Thick, inky, borderline-oppressive black linework coagulates into forms and shapes that are intensely and inherently unfamiliar, yet in no way difficult to relate to: Brinkman’s thought this world through right down to the most recognizable patterns of individual behavior and social interaction, and to construct a fully-realized society out of such a delirious mish-mash of characters conjured forth directly from the id without mediation is a staggering accomplishment in and of itself; to go one better by imbuing his creatures with an unbreakable through-line of warmth and humor is something else altogether — and “something else altogether” is as fair an “elevator pitch” summation of Teratoid Heights as I think you’re likely to find.

It’s easy to see how this work challenged an entire generation of cartoonists to “up their game” : few things are so visually literate and hitherto-unseen simultaneously; few things are grasped so easily while remaining ultimately and deliriously confounding. Threading a needle between the known and the far less so with a deceptive and illusory (but no less “real” for that fact) ease, Brinkman accentuates the essential characteristics of each polarity in a manner that draws stark contrasts between the two while moving, constantly, toward a state of unification — at the end of each strip you know and feel precisely what’s happened, but you’ll be damned if you can explain it adequately to anybody else. 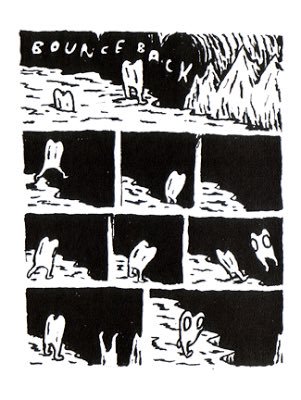 Walt Kelly and Jon Lewis are every bit the influences here that fellow Fort Thunder artists C.F. and Brian Chippendale are, Brinkman zeroing in with precision on the strongest aspects of C.F. and Chippendale’s experimental, fluid visuals in order to construct the kind of “funny animal” (and, in this case, alien) pseudo-civilization (one that mirrors our own on both the micro and macro levels) of which Kelly and Lewis would be proud — and would likely recognize as being a natural outgrowth of their own artistic lineage. Did I already use the word “staggering” to describe all this? I believe I did, but nevertheless — it bears repeating.

Even taking the above into consideration, though, it can’t be stressed enough that Teratoid Heights constructs, and exists within, a category unto itself — one that actually and actively defies categorization, that quietly yet forcefully insists that you meet it on its own terms, and that rewards you for the effort you put into doing so every step of the way, from first page to last.