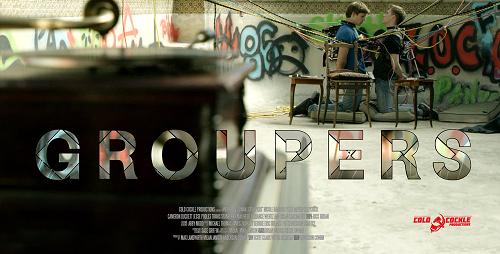 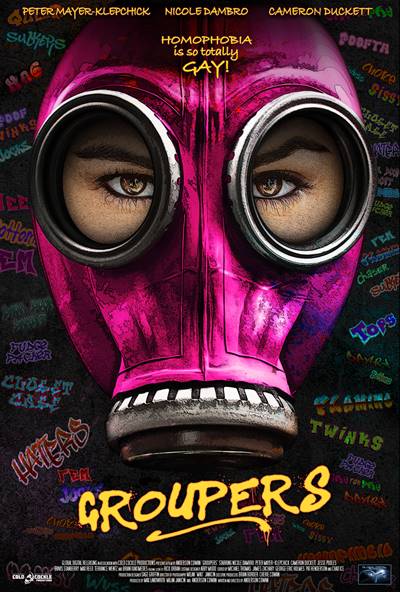 Anderson Cowan has spent the last couple of decades behind a radio panel. With GROUPERS, releasing in September, he was able to switch up the equipment. We spoke to the amiable media personality about transitioning into filmmaking. 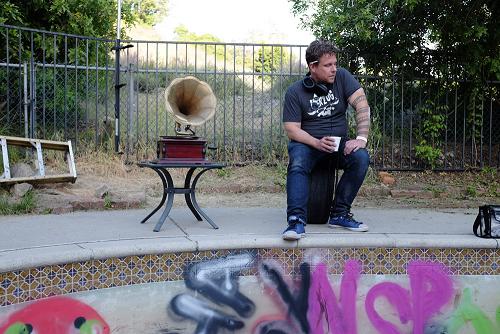 Daily Grindhouse: Hey Anderson — before we get into the flick, tell us about your background in the media. Yep, this is where you get to plug sh*t!

Anderson Cowan: Spent twenty years in radio producing nationally syndicated programs. Graduated from film school during that stretch and have been hosting my own podcasts the past decade or so. The Film Vault and CinemAddicts are my two film shows, The After Disaster is a weekly “comedy” show and my most recent creation is “I’ve Got a Movie To Make,” which is a weekly chronicle on the process I’m currently going through with GROUPERS in real time.

Daily Grindhouse: In your head, was it a natural transition from hosting digital radio shows and podcasts to making movies?

Anderson Cowan: That’s been the plan from the start, the podcasts just kind of happened along the way, something I fell into.

Daily Grindhouse: Was part of the impetus for you ‘I’m sick of talking about other people’s movies, it’s time to talk about my own!’?

Anderson Cowan: No, never, I’ve been talking about other people’s movies most of my life I don’t see that ever changing. I’ve wanted to make my own movies for some time now, but it comes from a place of absolute respect for the medium, a desire to have something I created to be in the same arena as the things I’m in such awe of and owe so much to. If I were a pretentious douchebag this is where I’d say I wanted to give back, but I’m not, so I won’t.

Daily Grindhouse: And how many different ideas did you toy with before settling on this particular story?

Anderson Cowan: I’ve had countless ideas for movies over the years and many of those I’ve written out as full length screenplays and or treatments, but GROUPERS was the first one that was small enough to do on my own. I knew soon after coming up with the basic nuts and bolts of the story and characters that I’d be able to raise the modest budget on my own without having to beg and plead with a more traditional investment route. Worked out well, since I don’t think I could’ve got the funding needed from those avenues being a first time filmmaker with such an audacious story to tell. Would’ve taken some real convincing and I imagine compromises would have had to been made. I’m very happy to say that I did not have to pull any punches with the finished product.

Daily Grindhouse: How long of a journey has this – as in, making  this movie – been for you?

Anderson Cowan: Wrote it over three years ago, and it’s been a daily grind in one form or another ever since. Had my first kid around the same time I was raising the money for it, and he’s almost three now. Being a stay-at-home dad, I feel like I’m raising two kids on my own everyday, my boy and this movie, while my wife, the social worker, holds down her more normal full-time gig.

Daily Grindhouse: When and where were you when the germ of the idea came to you?

Anderson Cowan: The idea was born out of an innocent discussion on one of my podcasts, called The After Disaster. I was musing about the lack of Chinese finger traps you come across as an adult, was asking where they all went. Mike Carano, one of my co-hosts and the bartender in the movie, came back without pause that he had just thought of a great torture device, which involved male genitalia and Chinese finger traps. In keeping with the sophomoric discussion, I came back with a “YES! and what if they were both homophobes and had to get aroused for one another in order to be let go?!” I then quickly changed the subject, so as not to flesh out this idea any further in a public space. I knew I had something, and that something ended up being the movie we’re talking about today.

Daily Grindhouse: How different is that first draft to the shooting script?

Anderson Cowan: Much different. There was some real grisly stuff in the first draft, people being maimed, disfigured and killed off quite a bit. With each new draft I was finding new pathos within the different characters, nuances in their motivations and I found myself empathizing with some of them more than I initially would have dreamt I could have. In the end I respected most of them too much to harm physically, but that didn’t stop me from humiliating them throughout. There’s a lot of emotional abuse that just about every character ends up enduring.

Daily Grindhouse: Did it start with a character or a concept?

Anderson Cowan: The Chinese finger trap concept was the genesis of GROUPERS, but the theme is a continuation of two other scripts that I hope to do next. This one deals with homophobia and punishing those who perpetrate it, where as the next one punishes pedophiles, and the third puts big-game hunters through the wringer. GROUPERS is the first of what I’m calling a ‘comeuppance’ trilogy.

Daily Grindhouse: And any hurdles in actually getting the film before the cameras?

Anderson Cowan: So many hurdles, where to begin? The biggest one was finding the right location. Coming up with a house in the L.A. area that had an empty pool proved to be more difficult than we had anticipated. After months of searching, we found exactly one house that could work. The pool was drained, much of the house was cleared, there was/is someone living in it, and it wasn’t the abandoned house I had fantasies of shooting at. The pool was drained the week before and then came the rain. The three days leading up to the first day of shooting saw record breaking rain levels. We spent a percentage of the film’s budget just on tarps and such to keep the water out of the pool. It’s always something.

Daily Grindhouse: How hard was it to handle some of the serious tropics here and not offend anyone? A delicate balance, I assume?

Anderson Cowan: If GROUPERS doesn’t offend anyone, then we’ve failed. I was very careful not to offend the wrong people, though. Some of my closest friends, as well as a number of people involved in the making of the movie, are gay. I leaned on them pretty heavily at times and had them sign off on anything I wasn’t totally sure about. A few minor tweaks were made to the dialogue, but nothing too major. But yeah, I hope this thing rubs at least a few people the wrong way.

Daily Grindhouse: Can you tell us how you relate to the story, personally?

Anderson Cowan: I’ve been on the business end of the bully a lot in my life. The clothes and make-up I wore for a while when I was a teenager really brought out the ire in some of my more conservative peers. The more I got beat up for it, the more make-up I would wear. I wasn’t always the victim though, and the more painful memories I have of childhood today come from when I was the dick to a few kids back in grade school. I still cringe when I think of that, and I feel like I got what I had coming years later, in my make-up wearing days. Beyond all of this is my real disdain for individuals who don’t think as individuals and just go along with the crowd. This is my childhood stew that lead to much of what’s in GROUPERS.

Daily Grindhouse: This is your first film; probably goes without saying but is there anything you wanted to do on the next one that you did on this one – or vice versa?

Anderson Cowan: For sure, I want to work with as many of the same people as possible, but pay them better. That and I want to continue to push buttons, stir things up and hopefully piss a few people off in the process.

Daily Grindhouse: How are you expecting your listeners to respond to the movie?

Anderson Cowan: It was the last day of the production when my sound guy, Kyle Pham, pulled me aside and said that I had a very particular sense of humor, one that he shared. He then went on to say in a very earnest way that he hoped others share it too, and that they’ll discover this film. Most of my listeners know me all too well, and they’ll recognize my sensibilities throughout. It’s the uninitiated that Kyle and I are hopeful about.

Thanks so much for the great questions, and for covering our film.