Home  ⁄  The Wire  ⁄  CHICAGO AREA FANS – EVERYTHING IS TERRIBLE PRESENTS WEDNESDAY REWIND AT THE LOGAN!

What are you doing at 10:30 PM for the next several Wednesdays? What do you mean, “Sleeping, because I have a day job?” THAT’S LOSER TALK! The only reason you’d be sleeping on a Wednesday night is because SOCIETY has conditioned you to think that that’s the right thing to do, because it offers no alternatives for outdoor activity other than watching a friend of a friend’s band open for some mediocre band you’re vaguely aware of at some crappy dive bar, and then your friend Mike says he’s going to be there and you drive all the way there and then Mike texts you and is like, “I’m sorry, I’m feeling sick, I can’t make it,” and you go in anyway, because you said you’d come, and it takes forever for your friend’s band to come on, and there’s only six people there, and you don’t know any of them, and you only bought five bucks and you realize the crappy dive bar is actually self-aware of its’ own hipsterism, so it’s friggin’ four bucks for a Coors Light, and your friend’s band finally comes on, and they play for ten minutes and everyone looks bored, and you go home and then you decide that you’re never going to count on Mike for anything again, so fuck him.

Anyway, the next few Wednesdays you will have something to do. The Logan Theater is going to be hosting WEDNESDAY REWIND, a series of screenings co-presented by Everything is Terrible! that will bring some of the rarely seen, weird and wild relics of the VHS era to the big screen. Hosted by writer and Everything is Terrible! founder Katie Rife, the screenings are a bargain at a mere $3, and should serve to give some much-needed love to some video relics that never found the audience they deserve.

First up is INTREPIDOS PUNKS, a 1980 flick from Mexico. Here’s the synopsis:

Blasting out of Mexico sometime in the mid-’80s like a murder-happy Mad Max hopped up on God knows what, INTREPIDOS PUNKS opens with a gang of junkie “nuns” shooting up a bank and only gets more outrageous from there. Our hard-partying postapocalyptic punk rock biker gang deals drugs, takes drugs, joyrides through the Mexican countryside, terrorizes hapless citizens and taunts the cops that are powerless to stop them! And did we mention Satanic rituals, rogue luchadores, a topless scene about every five minutes and a theme song you’ll be pogoing to for the rest of your natural life? 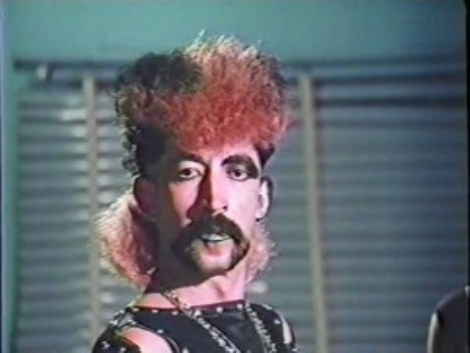 INTREPIDOS PUNKS looks like it was made for about 15 cents on sets held together with bubblegum, but still manages to pack more exploitation action into its brief running time than a dozen films of its ilk. And the incredible costumes are worth the price of admission all by themselves: You’ve never seen this much AquaNet, face paint, safety pins, chain mail bikinis, spiked EVERYTHING or re-appropriated shoulder pads in a movie– guaranteed!

Don’t take it from us, take it from DESTROY ALL MOVIES, the definitive document of punks on film: “This film isn’t recommended… it’s MANDATORY.”

Here’s a music video with some highlights just to get you all committed:

Upcoming screenings include the jaw-dropping FABIO: A TIME FOR ROMANCE (February 13), Donald Jackson’s ROLLER BLADE (Feb. 20) and THE MAN WHO SAVED THE WORLD, which may be better known as TURKISH STAR WARS.

For more information, check out the Logan’s website here! I’ll try to see you there, assuming Mike can get off his ass and give me a ride.