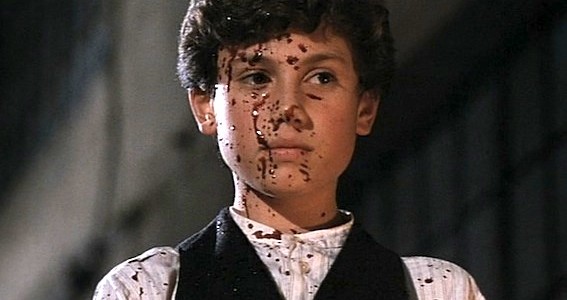 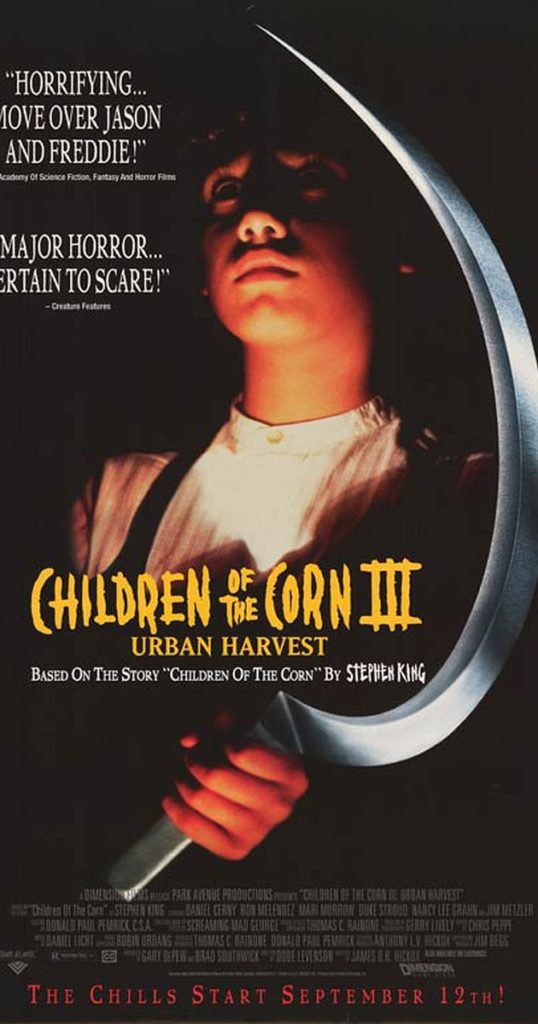 ‘95 was not a good year for horror. Despite featuring the wacky EL DIA DE LA BESTIA (THE DAY OF THE BEAST) and the underrated TALES FROM THE CRYPT: DEMON KNIGHT, as well as launching the SPECIES and PROPHECY series, it is best represented by the releases of LEPRECHAUN 3, RUMPELSTILTSKIN, PROJECT: METALBEAST, and THE MANGLER (which was notable for also launching a series, however hard we may try to forget). The slasher genre as a whole was growing stale and tired in the year before SCREAM (1996) started the  reinvigoration of the genre, both the slasher subgenre and horror as a whole (however, horror in the ‘90s wouldn’t reach it’s peak until 1999 — better late than never, eh?). The films of ‘95 somehow managed to be the most horrifically stale and masochistically fascinating, often at the same time; this is the case with CHILDREN OF THE CORN III: URBAN HARVEST. 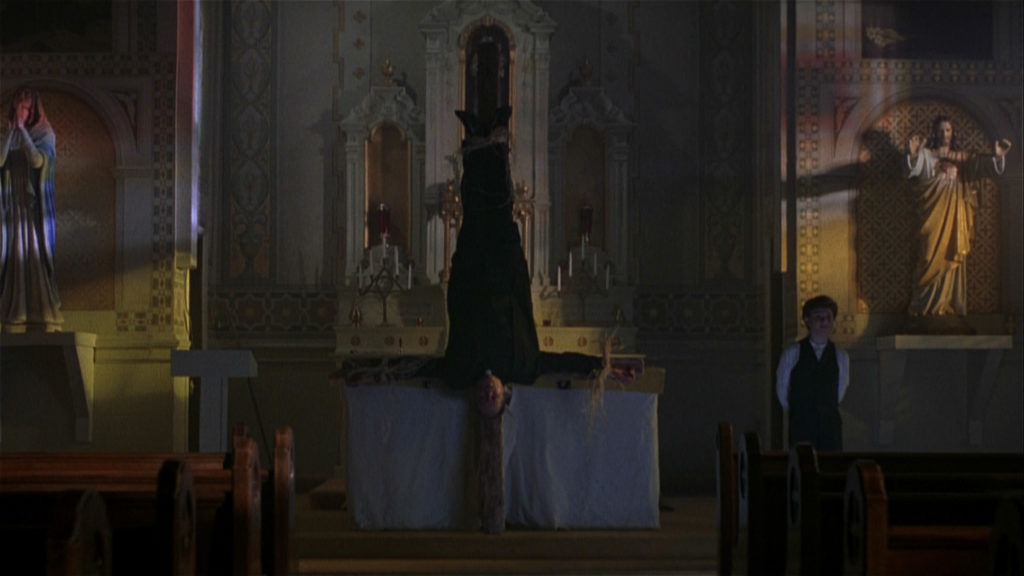 This is Cinéma Dévoilé and by now you know we don’t compare these sequels to their previous films’ mythology. Thankfully, neither does this movie. Two brothers, Eli (Daniel Cerny) and Joshua (Ron Melendez), are country boys put into foster care when they run away from their father; well, Joshua runs away — Eli uses corn to magic-murder the drunken farmer then buries a bible in the cornfield. Their foster home is with a lovely couple in the city. The mother-figure looks to her husband for help when she starts having hallucinations caused by the movie’s need to add pointless scares into plot; the father is no use, as Eli impresses him with the cornfield he grew in the parking lot of the abandoned factory next door (and if reading that sentence made no sense to you, just imagine how I feel having watched it). Joshua makes friends with his next door neighbours, Malcolm (Jon Clair) and Maria (Mari Morrow) Elkman, causing a rift between him and Eli, who it is revealed is only Joshua’s adopted brother. The corn that Eli has been growing is genetically modified to be resistant to bugs, take only four weeks to grow from planting to harvest (which leads his foster father to business up a deal for worldwide distribution). Oh, yeah… it also murders hobos, the foster mother, and causes the local children — including the uncredited first feature role of Charlize Theron — to form a cult that’s bent on the destruction of adults – you know, the usual properties of corn. As Joshua and Malcolm uncover clues that show Eli in 1964, looking the same age he is presently, they realize it’s up to them to find Eli’s bible, his only weakness, and to put a stop to his evil ways. 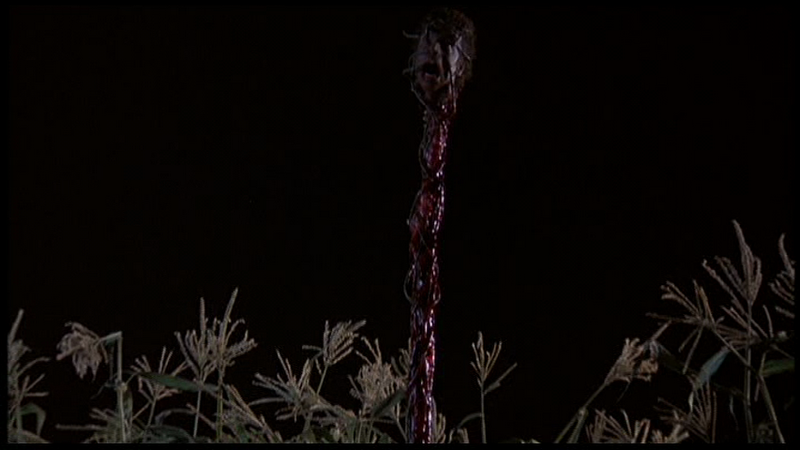 One of the first things you have to understand — and if I did my job with that plot outline, you should already — is that this movie is bat shit crazy. It takes “crazy child cult” and throws in corn-murder monsters, Christian vs Pagan themes, and ends on the highest note possible. The final act involves two of the craziest special effects ever put on camera, and we have Screaming Mad George to thank for that. George did the special effects for SILENT NIGHT, DEADLY NIGHT 4: THE INITIATION (1990) (which Dévoilé fans read about HERE) and many of the other Brian Yuzna or Stuart Gordon films of the ‘90s but URBAN HARVEST is where he reached his peak. When one of our heroes is trapped in a corn field near the end, the corn wraps around his neck and, instead of pulling his head off like viewers would assume, it stretches his neck and spine out until it’s standing ten feet in the air while still attached to his body. It’s horrific, and the only thing that tops it is the giant monster that appears out of nowhere and is constructed out of puppets, stop motion, and animatronics — it’s a sight to behold and makes up for some of the film’s weaknesses. 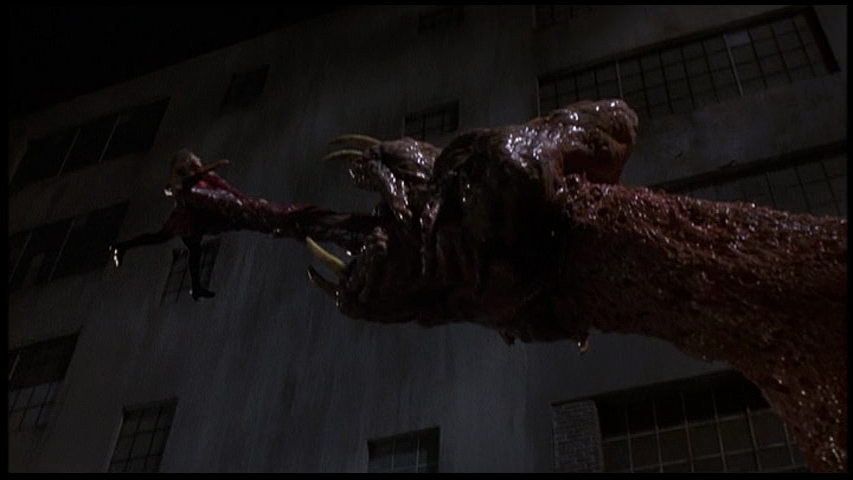 The two most glaring and alarming weakness that the film possesses come in the form of the twisting narrative and the poor acting. Characters form relationships within two scenes of meeting each other and we’re meant to believe that this gives them motivations for later decisions but just come across as phoney. The hallucinations the foster mother has go literally nowhere; they seem to be setting her up to be the hero of the story — which would cause her death to be a surprise — but they aren’t given enough weight or meaning to be worth their addition to the film. But it is the acting that is the worst, by far. Daniel Cerny’s role as Eli requires him to give many a passionate and fiery speech but instead of fire and brimstone his speeches provide laughter and sighs; Jim Jones, he is not. 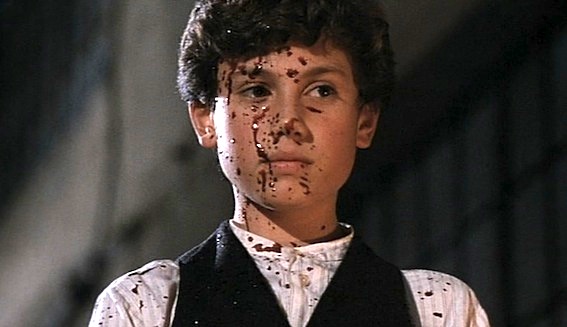 CHILDREN OF THE CORN III: URBAN HARVEST will not make it onto any top 10 lists and it definitely will not be preserved in the National Film Registry. But its astounding special effects work and laughable dialogue make it a fantastic film to watch with a group of friends. Just avoid taking it too seriously.