Home  ⁄  The Wire  ⁄  [EXCLUSIVE!] Read This Excerpt From Paul Davis’ THE STORY OF THE LOST BOYS

A new book chronicling the making of THE LOST BOYS is coming your way from author Paul Davis and DAILY GRINDHOUSE got an exclusive excerpt and image to sink your teeth into, even if you don’t like horror comics. The book is now available for pre-order at Cult Screenings UK.

Just last year, Davis released Beware The Moon: The Story Of American Werewolf In London. The massive tome chronicled the making of John Landis’ 1981 monster movie and featured rare, never before seen photos as well as interviews with most of the cast and crew. Lost In The Shadows: The Story Of The Lost Boys looks to be a just as in-depth look at Joel Schumacher’s 1987 tale of west coast vampires and sexy saxophone players, including interviews with the director, Kiefer Sutherland and plenty of surprises. 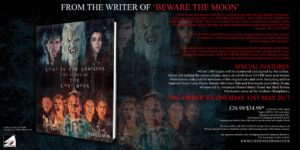 “I wasn’t initially planning on doing a second book,” Davis revealed to DAILY GRINDHOUSE. “However, due to the success of Beware The Moon, the publisher Gary Smart really pushed me to do another movie of my choice.” Davis and his fiancé—whom the author proposed to in the dedication for Beware The Moon—attended a sold out screening of THE LOST BOYS at the Enzian Theater in Orlando, Florida. “The crowd was manic,” explains Davis. “As soon as the movie started, the crowd erupted like a rock concert! I got goose bumps and my fiancé immediately nudged me and said ‘this is your next book.” 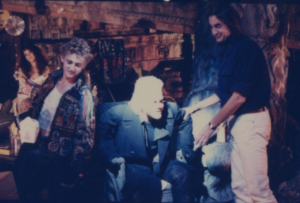 Davis granted DAILY GRINDHOUSE an exclusive excerpt from the book, breaking down the shooting of the maggot eating sequence from the film. Save this for later if you’re having Chinese for lunch.

JOEL SCHUMACHER (Director): When Kiefer is sitting on his throne in that cave scene, we lit him with a giant arc light that Michael Chapman placed directly above him horizontally. That’s why he’s bathed in that white light. He’s the king and he’s holding court. I believe the scene with the Chinese food was in James and Janice’s original script. It’s no surprise that it made it through the rewrites, because it was such a brilliant and original idea that was very important to the movie. Of course, for the scene to work, and be as effective as it was, we needed Dennis Grisco to bring in real maggots and worms.

BILLY WIRTH (‘Dwayne’): Because I was so green to the industry, and hadn’t really read the script, I didn’t realize that the shots of the maggots and worms were going to be added later. I just remember sitting there, looking at my food and thinking, “What maggots? What the fuck are they talking about!?”

KIEFER SUTHERLAND (‘David’): Joel and the editor cut that scene together very well, because, when we were looking in the cartons there were no maggots or worms. It was like doing green screen. We were reacting to nothing because they would insert those shots later.

WILLIAM GRISCO (Animal Trainer): For the noodles we used big old night crawler worms, and for the rice we used, what’s known as, a rice worm. We used rice worms instead of maggots because they were slightly bigger, but were the same colour, so they looked right on camera. The night crawlers looked great because they’re constantly trying to burrow. Once we took their bedding away they were just trying to get to the bottom of the container, so that’s why they moved like that in the movie.

JOEL SCHUMACHER: When they first put the maggots into the Chinese food containers, they just sat there like blobs. They didn’t move at all. Grisco then squeezed a tiny bit of lemon juice over them and they went crazy. That’s the shot that’s in the finished film. I do love that whole scene very much, and it was a lot of fun to shoot.

And you can bet there’s a lot more where that came from. You can pre-order Lost In The Shadows: The Story Of The Lost Boys right here!

A writer, filmmaker, musician, and amatuer bon vivant, Mike Vanderbilt spends his days and nights on either end of the bar. When not hard at work slinging margaritas, he tries to squeeze in as much adventure, excitement and romance as he can. He also has a certain moral flexibility.