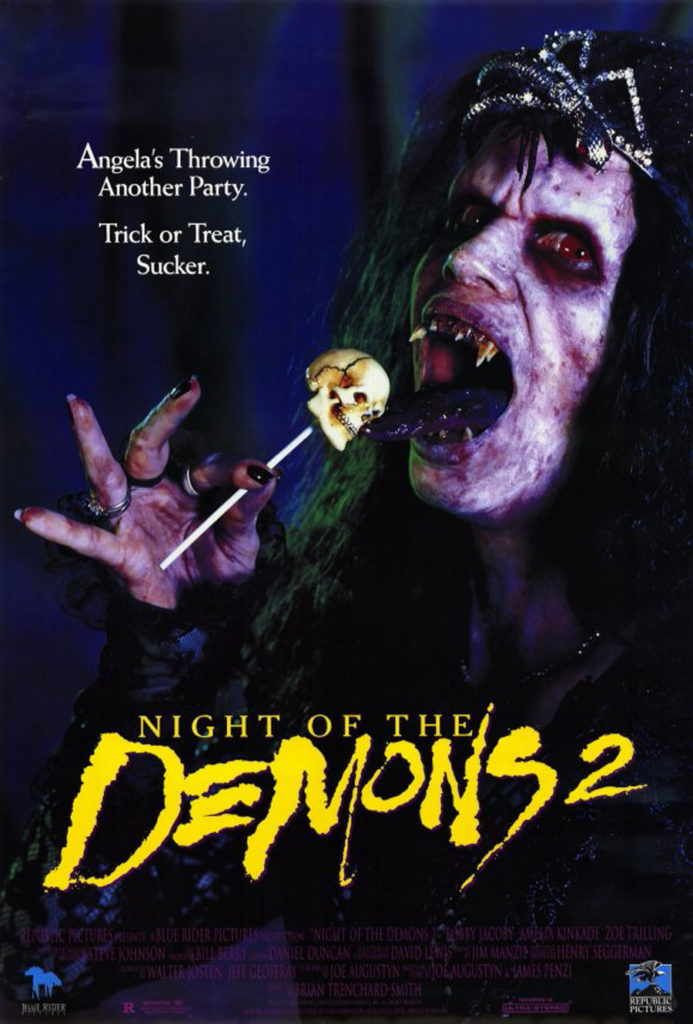 In 1985, Dan O’Bannon directed what would be not only one of the greatest horror sequels of all time but would also the first entry into a parallel series of films: THE RETURN OF THE LIVING DEAD. Combining humor and horror, RETURN introduced the horror lover to the punk characters that ruled the ‘80s; not that punks hadn’t been seen in horror films before (just take a look at A.M. Novak’s review of 1979’s DRILLER KILLER) but the over the top punk of RETURN was one that only existed in the films of the 1980s – films like NIGHT OF THE DEMONS (1988).

NIGHT OF THE DEMONS combined an ’80s punk aesthetic with a compellingly perverse sexuality and a plot that moved forward with a breakneck speed. Many a video store hound’s sexuality was first awakened by Linnea Quigley’s famous entrance to the film, only to be forcefully questioned when exposed to her disappearing lipstick trick – a sight that words would do but poor justice. Like EVIL DEAD (1981), the movie takes place over a single night in which a handful of characters that are trapped in an isolated building are under attack by demonic forces with the power to possess the bodies of the living. It is a fantastic movie.

Unfortunately, they made a sequel. 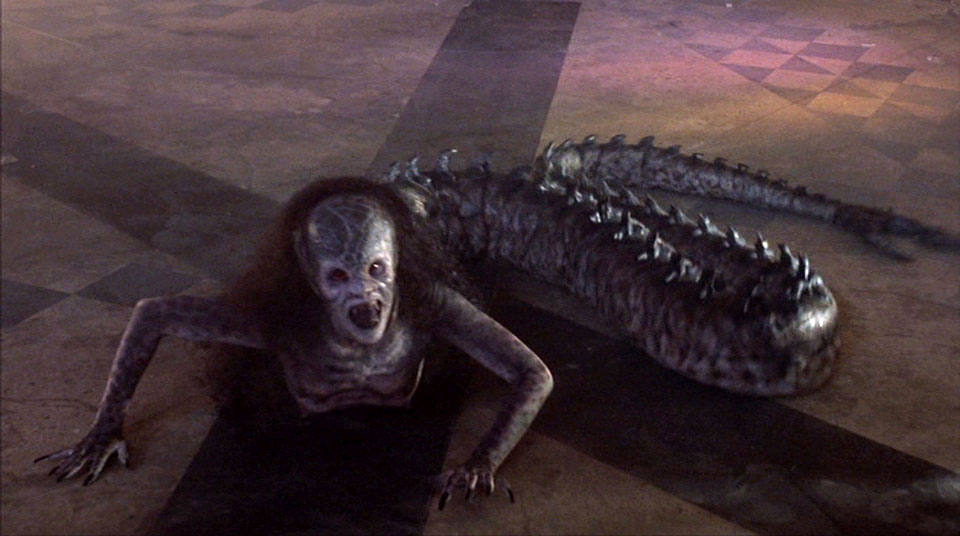 NIGHT OF THE DEMONS 2 (1994) features everything you want from a sequel: worse performances, poor logic, uninteresting characters, unexplained mythology, flat cinematography and a dragging plot. Wait, did I say want? Sorry, I meant dread. Everything you dread from a sequel.

The film is set at St. Rita’s Academy, a Catholic boarding school, with momentary visits to Hull House, where six years ago bodies were recovered; all, that is, except for Angela’s body — the disappearance of which has lead to rumors that she descended into hell. Those rumors turn out to be true when a group of party goers — sorority girls and fraternity boys, with Angela’s seriously boring sister — enter Hull House and wake Angela. After some light scares, the party leaves the house but not before one of the girls grabs a tube of Angela’s lipstick; taking the lipstick out apparently allows Angela to travel over a previously unmentioned underground river that had trapped her at Hull House (the dialogue that explains this to us is what I like to call an “exposition shotgun”). Back on campus, the lipstick rapes/infects one of the girls; this causes her breasts to turn into hands and murder another one of the students (that was a sentence I never thought I would write… at least not sober, anyway). It’s up to a nunchuck-using nun (oh, I just now got the pun), a disbelieving priest, a demon-obsessed student, and our jocks to travel back to Hull House to kill the demons and stop Angela from possessing her sister. 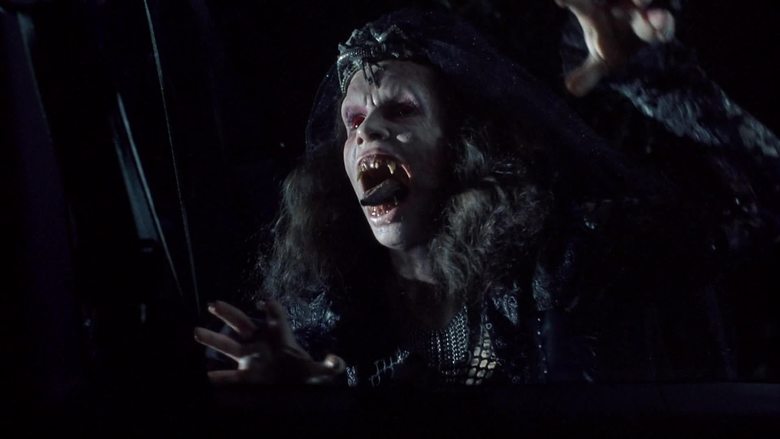 The circuitous path the plot takes bogs this film down before it even gets going; bouncing back and forth between locations, we are never given enough time for anything interesting to play out within these settings. The first journey from St. Rita’s to Hull House comes far later than required, especially for how mundane and lackluster the Hull House sets are designed and framed. However, it seems it will pay off when the lipstick is brought back to the Academy and demonic mayhem seems to be ramping up. This is actually just another let down; one short scene of mayhem leads to our characters deciding to return to Hull House to end of a grand whimper. The interesting setting is left unexplored and the film suffers for its inclusion in the first place.

While the acting is almost bad across the board, it’s only made insufferable by the poorly written characters. Our cast of characters are given ample time in the beginning of the film for establishment; some might say excessive time, especially considering there is nothing to establish – just one-dimensional caricatures that fail to interest or inspire identification. Unlike the slasher films of the previous decade, which included large groups of uninteresting characters whose only purpose was to be killed in interesting ways, NIGHT OF THE DEMONS 2 seems to be under the false impression that its characters are interesting while subsequently failing to offer interesting ways of killing them off (except for the aforementioned “boob-hands”). 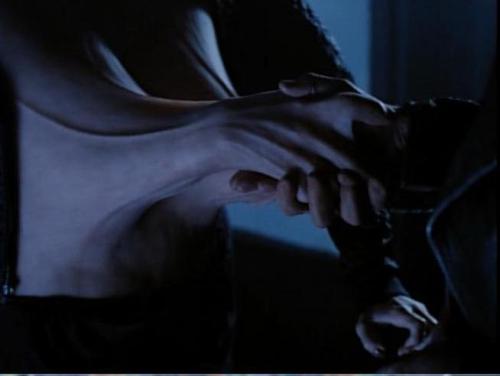 The largest problem that NIGHT OF THE DEMONS 2 faces is its sexuality. In the original film, Linnea Quigley is sexualized by the camera but the character that she is playing is fully in charge of her own sexuality and uses it to her advantage. What’s more, Quigley is known for her sexuality from performance in RETURN OF THE LIVING DEAD and even her own workout video: LINNEA QUIGLEY’S HORROR WORKOUT (1990). However, NIGHT OF THE DEMONS 2 introduces nudity into the film via the fraternity brothers voyeuristically preying on the sorority sisters via binoculars and tries to treat it like a charmingly “boys will be boys” action rather than the disgusting invasion of privacy that it is. What’s even worse is the scene in which the lipstick turns into a phallic work-like creature that EVIL DEAD-like rapes its way inside of a character; however, unlike EVIL DEAD, which presents its rape scene as horrific in its entirety, NIGHT OF THE DEMONS 2, with its mythology of demon as succubus, has it’s victim’s cries of protest transform into cries of pleasure before immediately having her grow “boob-hands.” While films from auteur directors like Sam Peckinpah’s STRAW DOGS (1971) and Stanley Kubrick’s A CLOCKWORK ORANGE (1971) have their troubling rape scenes examined and analysed, NIGHT OF THE DEMONS 2 has not yet and provides an overlooked example of the problems with rape in cinema.

Can’t say I know how what else there is to say about NIGHT OF THE DEMONS 2, so why don’t I end this review like the movie: on a grand whimper. Next week we will be revisiting one of my favorite sequels (which means it will probably be terrible): 1995’s CHILDREN OF THE CORN III: URBAN HARVEST.