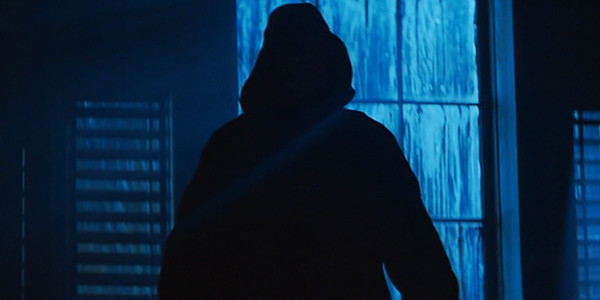 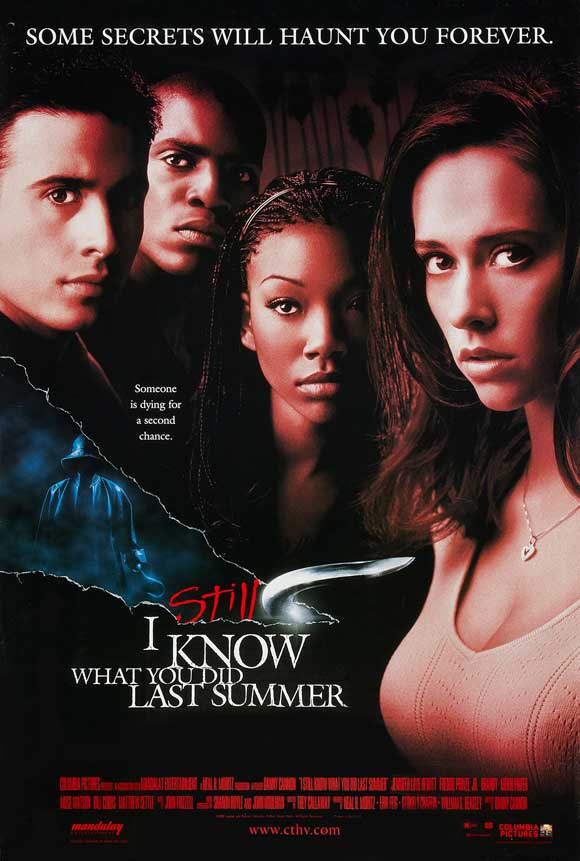 I STILL KNOW WHAT YOU DID LAST SUMMER is the sequel to the Kevin Williamson scripted I KNOW WHAT YOU DID LAST SUMMER (1997) that somehow manages to be all of the things that SCREAM 2 (1997) made fun of sequels for being, without any shred of self awareness. The film stars the remnants of Jennifer Love Hewitt’s musical career — yeah, remember that one? — and living Pez dispenser Freddie Prinze, Jr. as will-they-won’t-they lovers who solidified their romantic bond in the previous film by failing to murder just the worst fisherman — seriously, for a slasher villain called “The Fisherman,” he really doesn’t do a lot of fishing.

The film opens with a pointless scare — primarily there in order to fire exposition at the audience — then proceeds for a hundred minutes with nonsensical plotting, before ending with another pointless scare — this time physically impossible and, once again, pointless. Pointless, or at least confused, is an adequate descriptor for this film as a whole; let’s just explore The Fisherman’s idea of revenge.

Step 1: Have your son attend Hewitt’s college, and therefore be a romantic possibility.

Step 2: Fake a contest to the Bahamas, paying all expenses, for four people. Why four? Because why not!

Step 3: Stage a car accident to attack Freddie Pez, Jr., but not kill him, despite him also being a person you want revenge against, in order to prevent him from making it in time to take the trip with Hewitt — thus your son (Matthew Settle) is granted the extra ticket and comes along on the trip in his place.

Step 4: All of this has to be perfectly timed so as to coincide with hurricane season in the Bahamas, so as to prevent travel between the island and the mainland.

Step 5: Kill all the innocent staff members at the resort, because it is a sequel and we need a body count.

Step 5: Play mind games with Hewitt in order to keep her on guard and ready to fight against you because… nope, I got nothing.

There you have The Fisherman’s six steps to getting revenge. Astute readers may have realized that Step One leads to a much, much simpler way of murdering someone, but that way we wouldn’t have an overly confused and nonsensical story. I’m poking fun at the plot, but it’s so needlessly convoluted that it is hard to believe that people actually took this seriously — though younger me definitely did.

I STILL KNOW WHAT YOU DID LAST SUMMER is everything that is wrong with the teen slasher boom of the late ‘90s. These films decided to emulate the gorgeous visages and modern gloss of SCREAM (1996), without realizing that it was the post-modern approach to the slasher genre that made SCREAM the success that it was. Instead of throwing a curveball into the genre, these films just rehashed the same old tired and true devices that slashers had already been doing for twenty years — only this time, they’d taken their tongue fully out of their cheek. I STILL KNOW WHAT YOU DID LAST SUMMER even manages to fail at its attempt to inject humor through the comic relief of Jack Black as a stoner; even his overacted death scene falls flat.

What I STILL KNOW WHAT YOU DID LAST SUMMER shows is that, despite the resurgence of interest in slashers after SCREAM, an over-reliance on the tropes that had previously been run dry are not made any less egregious by applying a new paint job. Where films like CHILDREN OF THE CORN III: URBAN HARVEST and JASON GOES TO HELL: THE FINAL FRIDAY (1993) demonstrate the strengths of Cinéma Dévoilé, imagination applied liberally to cliche, I STILL KNOW WHAT YOU DID LAST SUMMER, SCREAM 2 and the other teen slashers demonstrate its weaknesses.

Zack Long is an independent film historian with a focus on horror, an aspiring filmmaker, a cat owner, and host of the 'Paths of Glory; or How I Learned To Stop Worrying and Love the Shlock' podcast. When he isn’t working on something film related, you can find him ‘enjoying’ an overabundance of caffeine, or playing roleplaying games with his friends. Check out Paths of Glory at soundcloud.com/pathsofglorypod!