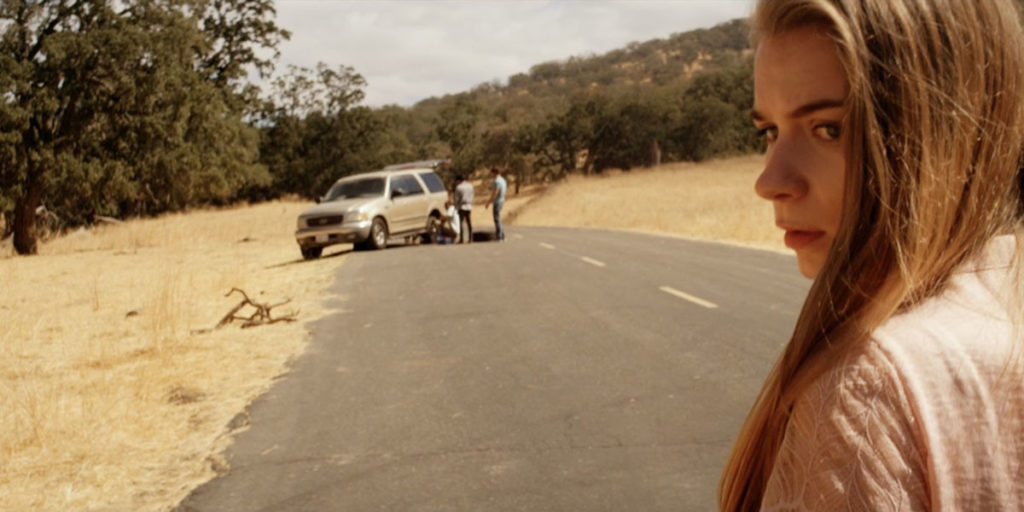 While driving on an isolated stretch of road, a group of college students carpooling on a long drive are stranded when one of the tires on their SUV blows out. They’re hanging out in the hot sun replacing the tire when they learn the flat wasn’t an accident. Someone shot out the tire, and now they’re sniping at the group with lethal accuracy. Pinned down and separated, the survivors are forced to come up with a way to make it out of this standoff alive without knowing who they’re up against or why this is happening. DOWNRANGE is a twist on slasher tropes, opening with zero introduction to its characters and jumping directly into the action. The young cast gets picked off one by one, but instead of standard slasher weapons, the killer is taking them out from a distance. It’s relentlessly brutal; things go about as well for the characters as one would expect. This being a Kitamura film, there are plenty of spinning cameras and flashy moves, but the film also ends up being surprisingly political. Whether this is intentional or not is up for debate, but given the number of mass shootings in this country, DOWNRANGE plays less like an outrageous fiction and more like the kind of news story you’d read about any day of the week. That plays out exactly as it should, and the film ends on a note of incredibly bleak humor. It looks great and has plenty of impressive mayhem and effects, but some audiences may be too unsettled by the fact that the events depicted in the film could literally happen at any time to make it to the end credits.

Detective Rebecca Faraway (Sarah Beck Mather) is going through a rough period in her personal life when she and her partner Eli (Adonis Anthony) are faced with their first serial killer case. Two bodies are found that were victims of some sort of ritual, and the investigation starts pointing toward Michael Sweet (Jamie Satterthwaite), a charming man who works at the real estate firm that owns the buildings where the bodies were found. Rebecca finds herself drawn to Sweet while simultaneously convinced that he is somehow involved with the murders. As pressure from both her personal and professional life intensifies, she begins to suffer nightmares and hallucinations that may be pointing toward the killer or warning of the collapse of Rebecca’s sanity–or both. While Sarah Beck Mather gives a strong lead performance and Satterthwaite gives his character a most welcome and unexpected weird energy, CHARISMATA is ultimately dragged down by overly familiar horror/crime tropes and somewhat slack pacing. By the time the film moves into its finale, viewers may find themselves reminded of the kind of late 1990s/early 2000s straight-to-video movies that frequently straddled the lines between police procedural, (erotic) thriller, and/or outright horror in its tone and atmosphere. For what it’s worth, the film that most came to mind for this writer while watching CHARISMATA was HELLRAISER: INFERNO. Whether that’s an endorsement or a warning will depend on the individual viewer. 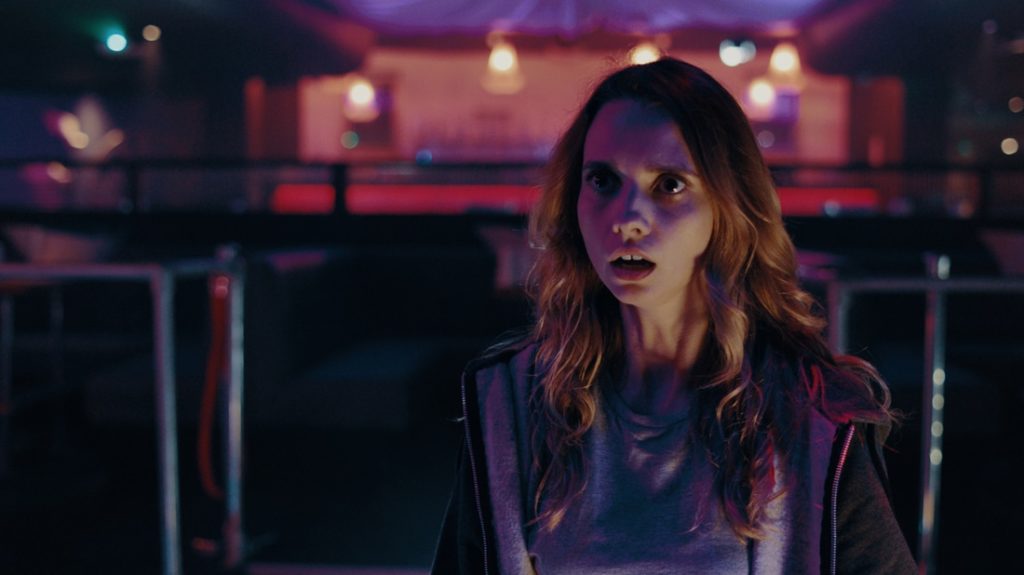 Comic book artist Josh Baker (Eric Roberts) sees Cheryl (Janine Turner) on the street and is determined to get a date with her. He tags along with her and they banter charmingly until Cheryl collapses on the sidewalk and an ambulance shows up to take her away very quickly. Josh calls around to every hospital in New York City, but Cheryl is nowhere to be found. He goes to the police and tries to explain the situation to Lt. Spencer (James Earl Jones), but Spencer is not much help and Josh also finds little sympathy from officer Sandra Malloy (Megan Gallagher). He begins to poke around himself and finds this mysterious ambulance popping up in strange places, and may be connected to a string of disappearances. Josh ends up in the hospital with Spencer suspecting Josh in connection to the disappearances, so he makes his escape with old newspaper man Elias (Red Buttons) and connects with Malloy to hopefully find the ambulance before it’s too late for Cheryl or himself. THE AMBULANCE is a hugely entertaining thriller and an overlooked gem in filmmaker Larry Cohen’s oeuvre. The film was part of this year’s repertory screenings, shown from a very nice 35mm print with Eric Roberts and Larry Cohen in attendance for a post-screening Q&A. Preceding the screening was the recording of Doug Tilley and Liam O’Donnell’s podcast Eric Roberts Is the Fucking Man, featuring Roberts himself as a guest on the show for the first time ever. The show was great fun and Roberts was clearly having a blast, and having both him and legendary raconteur Cohen on stage together after the film was a fantastic way to cap off the festival’s celebration of their film work. 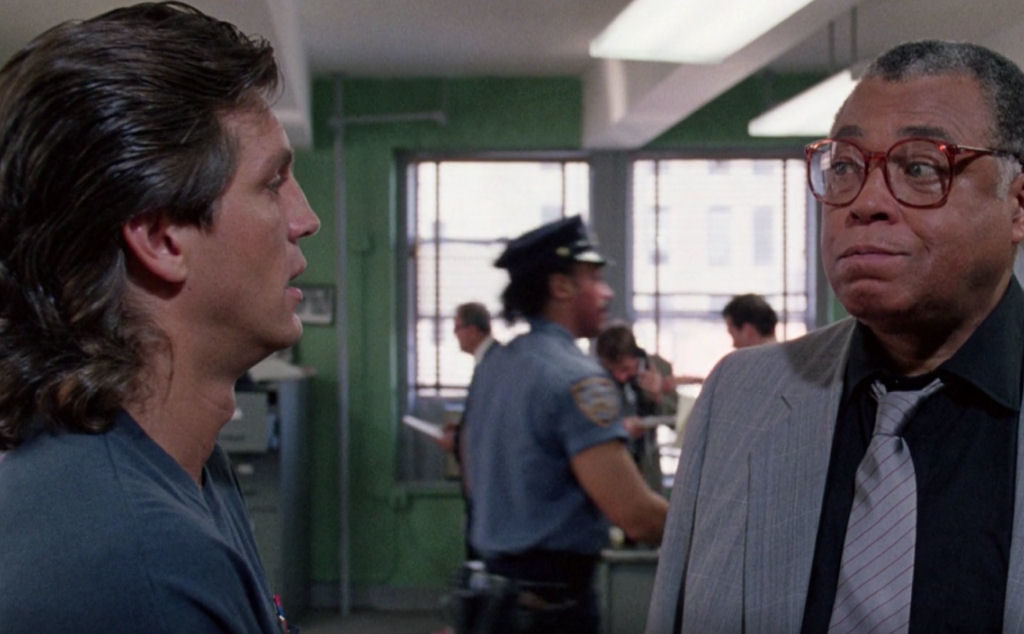 Javid (Reza Brojerdi) and Tan (Erkin Acar) steal a car to make a getaway and find a partial screenplay in the back seat. It starts with the exact conversation they had just before they stole the car, and the next scene describes them reading the script. They track down the writer, dentist and aspiring screenwriter Arend (Alexander Schubert) in hopes of figuring out what the hell is going on, but he’s just as dumbfounded as they are. Although he does know everything they’re going to say and do before they do it, and when he prints them up a copy of the current draft they learn that they are about to have a very rough next few days. Caleb (David Grant), a former cult leader who may or may not actually be god, refers teenager Eliana (Xenia Assenza) to a number of increasingly dangerous bounty hunters to take revenge on Javid and Tan against the advice of her friend and bodyguard Carson (David Masterson). Will Eli get her revenge, or will Javid and Tan get the better of their assassins? And how does superhero vigilante Hyper Electro Man (Mathis Landwehr) fit into the bigger picture? SNOWFLAKE is a dizzying, hilarious film that combines post-Tarantino action/crime drama and Charlie Kaufman’s metafictional surrealism with exhilarating results. Screenwriter Arend Remmers and an excellent cast bring the population of the film’s criminal underworld to vivid life, and its wild narrative feels genuinely unpredictable. Like Ryan Prows’s LOWLIFE (also playing Cinepocalypse), SNOWFLAKE makes a convincing case that there are still ways to bring something new to the kind of crime drama that followed in the wake of PULP FICTION and died off when it became apparent that most filmmakers were clueless as to what made Tarantino’s breakthrough so wildly entertaining. These films are peopled with unique and interesting characters that form a solid foundation for the horror and mayhem that surrounds them, setting up actual stakes in their conflicts and lending emotional weight to their actions. SNOWFLAKE is hugely entertaining, and instantly marks debut feature director Adolfo J. Kolmerer and his collaborators in front of and behind the camera as talents to keep an eye on.

Hugo (Guilherme Prates) steals a motorcycle carburetor from a junkyard with the help from the mysterious Paula (Carla Salle). He then joins his older brother Ricardo (Emílio de Mello) and some other friends on a ride out to a remote spot for biking and partying where they run into Paula again. She leads them to another spot further out where they can swim in a quarry, but shortly after arriving a group of riders clad in all black appear and attack Hugo’s group. The survivors are left to escape the clutches of these murderous riders or kill before they are killed themselves. MOTORRAD is a horror story stripped to the bare bones and strapped to a motorbike, a take on the traditional slasher with a lot more leather and chains. Unfortunately, that sounds much more fun than the film actually is: the film’s color palette is flat and drained of life, frequently looking almost black & white. It’s an odd choice, but given the film’s hints at supernatural happenings and leaning toward allegory it makes sense. A bigger problem than its color correction is the fact that MOTORRAD is relentlessly straightfaced. It’s somewhat inexplicable that a movie about a gang of motorcycle-riding slasher villains has absolutely no sense of humor about itself. There are some great, nasty practical effects and effectively staged chases, but it’s tough to get invested in much of anything that’s going on since most of the characters are barely defined other than by what jacket or helmet they’re wearing. There’s a solid and fun horror movie lurking in MOTORRAD’s basic concept, but sadly this isn’t that movie. 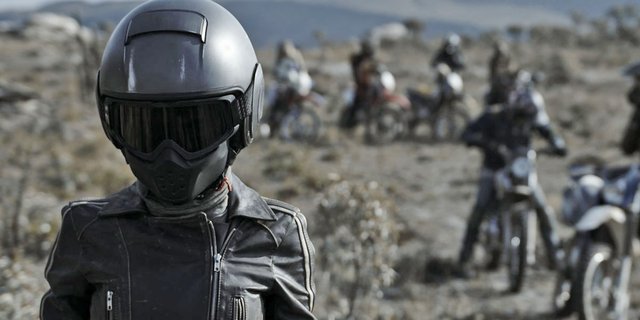 After a tragic accident takes her husband, young widow Beth (Danika Vandersteen) takes her toddler son Lowen (Woodrow Graves) to her mother’s seaside vacation home to grieve their loss. It’s a beautiful place, but Beth is a little creeped out when her new neighbor Joseph (Terrance Murray) introduces himself one day while she and Lowen are playing on the beach. Odd things are happening around the house, too, including a blaring sound that wakes Beth in the middle of the night and whose origin she can’t seem to pin down. Is the strain of her husband’s loss and taking care of Lowen on her own getting to her, or is there someone–or something–watching them? Seth A. Smith’s debut film LOWLIFE was a surreal, grimy black & white horror/drama made for very little money that made a big impression on the festival circuit for its blending of genre trappings and experimental visual techniques. His follow-up THE CRESCENT is a huge step up in production quality from that previous film, a slow burning low-key psychological horror film in the vein of regional 70s American films like MESSIAH OF EVIL. It’s in color this time, but most of the film is shot in a palette that (appropriately) feels drained of life and so thoroughly conjures its setting you can almost feel the cold wind coming off the ocean. The film also uses excellent scoring and sound design to keep the viewer on edge. But Smith’s major innovation here is the film’s focus on an actual toddler as a main character. It’s a huge gamble, and it pays off: Smith uses little Woodrow Graves’s natural behavior and speech patterns to fashion a convincing performance that works because it doesn’t feel like a performance in the least. When Lowen is inevitably put in danger, it’s legitimately scary because he feels like a completely real character. Smith creates a powerfully hypnotic atmosphere throughout the film, but unfortunately ends up explaining far too much in the finale. It seems possible that people found LOWLIFE too obtuse, and that Smith overcorrected this time around. As such, the film hits a near-perfect ending and then cruises right past it with a couple of lengthy, unnecessary scenes that provide information the viewer really didn’t need to piece together an explanation to the film’s central mystery. Overall, THE CRESCENT is a beautiful, audacious take on some familiar genre territory whose narrative flaws are more than made up for by its atmosphere and originality. 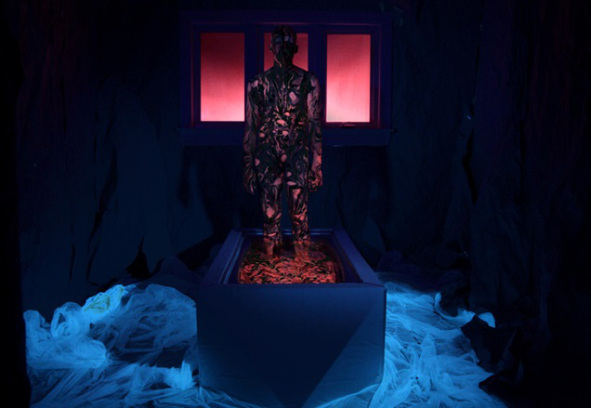