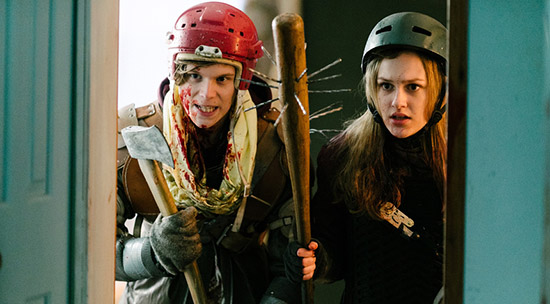 The day started with the short film FEEDING TIME. I actually caught this one earlier in the year at the Chattanooga Film Festival, so I will link to my review of it from there (which also includes my first thoughts on SEQUENCE BREAK—see below). But the short version is that writer/director Matt Mercer has crafted a super-fun horror comedy with some honest scares, laughs, and a nifty gore gag.

Just as the first time I saw it, FEEDING TIME screened before SEQUENCE BREAK. That first viewing was a late night show, so I was exhausted when I saw it. While I really liked the nightmarish imagery, odd tone, and performances in the film, I felt like I did not fully absorb the intricacies of some of the plot. I was hoping that a decent night’s sleep and seeing the film at an earlier time might heighten my ability to grasp the finer nuances of writer/director Graham Skipper’s look at fate through the lens of a sci-fi film that turns into gooey, slimy existential horror. Alas, I still had the same questions about the film’s third act after this viewing.

That said, Skipper has created a film that nails a tone of creeping dread with a visual style that neatly goes between naturalistic and stylized horror with blacker than black pools amidst primary colored streaks of light. The performances—especially Chase Williamson’s turn as an awkward video game repairman—are solid across the board and a killer score by Van Hughes lend some texture to the film that keeps it from taking a totally deep dive into complete surrealism in the third act. 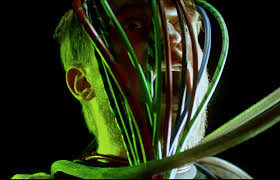 I still really like SEQUENCE BREAK as purely a tonal and visual exercise in dread and longing. I just wish some of the story elements were not as elusive as they sometimes are. But Skipper—long a fixture as an actor in the horror genre—clearly has a future behind the camera.

BLOOD SHED was up next. A silly short film about a man who accidentally builds the most evil tool shed possible, it is a slight story that lives up to its title and doesn’t overstay its welcome. Believe it or not, I mean that as praise.

Like most people I know, I am burned out on zombies. But if you look at the current cultural landscape, most people I know are clearly in the minority. With that in mind, I was not expecting a lot out of DEAD SHACK. Maybe that is why I wound up enjoying it as much as I did.

Jason (Matthew Nelson-Mahood) is a quiet teenager who lets everyone walk all over him. He goes with his overbearing friend Colin (Gabriel LaBelle), Colin’s sister Summer (Lizzie Boys), their dad Roger (Donavan Stinson), and Roger’s girlfriend Lisa (Valerie Tian) to vacation at a rundown cabin in the woods. Given that I mentioned the dreaded “z word,” you can probably guess what happens next—and you would mostly be right. But co-writer/director Peter Ricq and his cast manage to wring enough comedic moments out of the film before and during the zombie material to not only justify the existence of DEAD SHACK, but also make it a modest success. 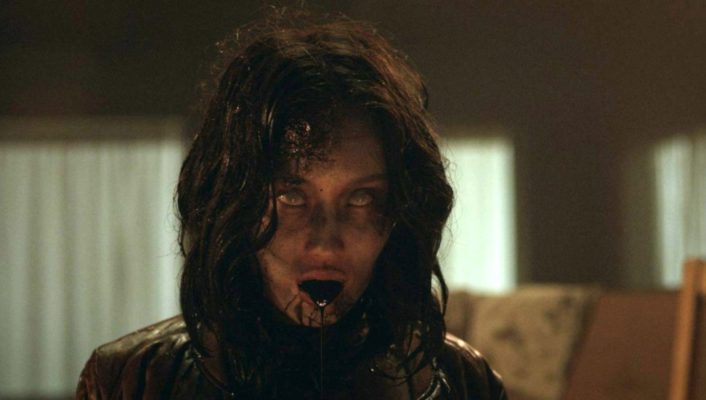 Most of the comedy comes from the interactions between the rambunctious family unit as Jason awkwardly tries to play along with behavior that is far outside of his reserved comfort zone. Roger is a forty-year-old who behaves like he might be a year older (at best) than his teenage son. His love of stupid/crude jokes has passed on to his son fully intact while Summer has taken that sense of humor and added a smart, acerbic edge to it. For her part, Lisa simply wants to be left alone to drink herself into a coma and ignore the abrasive family she finds herself in.

In all honesty, much of the dialogue that springs from this sitcom-like set up sounds like it should be performed in front of a live studio audience. Initially, that set up—punchline rhythm annoyed me, but then Ricq unwaveringly sticks with the formula to the point of absurdity. The film got me to the point when Colin and Roger make the same “sausages equal penises” joke three times in a row, I couldn’t help but laugh.

Stinson, Boys, and LaBelle are up to the task, taking their paper thin characters and making them likable enough that you want to see them survive once zombies start chowing down on people.

I had fun with DEAD SHACK and I don’t think anyone is more surprised than me.

After learning about it in late spring and including it in the Daily Rundown all summer and fall, I finally got see the newly discovered 35mm uncut print of SUSPIRIA. Since I can safely assume that if you’re reading this site, you know all about the film, I will skip any real review and focus on the experience of seeing it.

As a 35mm print for a movie released in 1977 that was found in the basement of an Italian movie theater, it is in remarkably good shape. There is some expected fading and a couple of scratches here and there, but I have seen much more recent 35mm prints of films in far worse shape.

Initially, it was odd to watch the film while the characters spoke in Italian. I have seen this film so many times over the last 25 years that I was used to the roughly dubbed English version and hearing Jessica Harper and Joan Bennett’s actual voices. But once that odd feeling passed, I was able to just soak in the slightly muted visuals and Goblin’s amazing score just like I always do.

Harper was on hand for a Q&A after the film and talked about the idiosyncratic working methods of Italian movie crews compared to American productions, how she got the role, and the difficulty of acting opposite someone who speaks a language you do not understand. She also gave credit to the print as a historical document, but was frustrated by its slightly faded look, urging everyone to watch the Blu-ray when it comes out. I understand her point, but as a film nerd who is just as interested in film history as the actual movies, I was thrilled to finally see the film uncut on a 35mm print.

The short film WE SUMMONED A DEMON was up next. A fun horror-comedy that delivers some laughs, gore, and roughly thirty gallons of stage blood from one rooster. It’s silly and slight and I laughed a lot. It is well worth your six minutes.

The new film from Spanish director Paco Plaza is VERÓNICA. A supernatural horror flick that draws on several well-worn tropes in the genre, the characters thankfully are interesting and likable enough to pull the film above the clichés into which it could have fallen.

The titular character (Sandra Escacena) is a fifteen-year-old latchkey kid living in Madrid in 1991. While her widowed mother works late nights in a bar, Verónica takes care of her three younger siblings, getting them ready for school in the mornings and making sure they eat dinner in the evenings before putting them to bed. While she handles the various strains that come from basically raising her younger sisters and brother with poise, it is clear that she longs for a more traditional teen experience.

Still mourning her father, Verónica joins two of her classmates in a séance using a ouija board to try to contact him. But if hundreds (if not thousands) of supernatural horror and satanic panic films have taught us anything, it is that you should probably never try to contact the dead during a solar eclipse—which is what she does. The séance ends with Verónica passing out after the ouija board goes into overdrive. 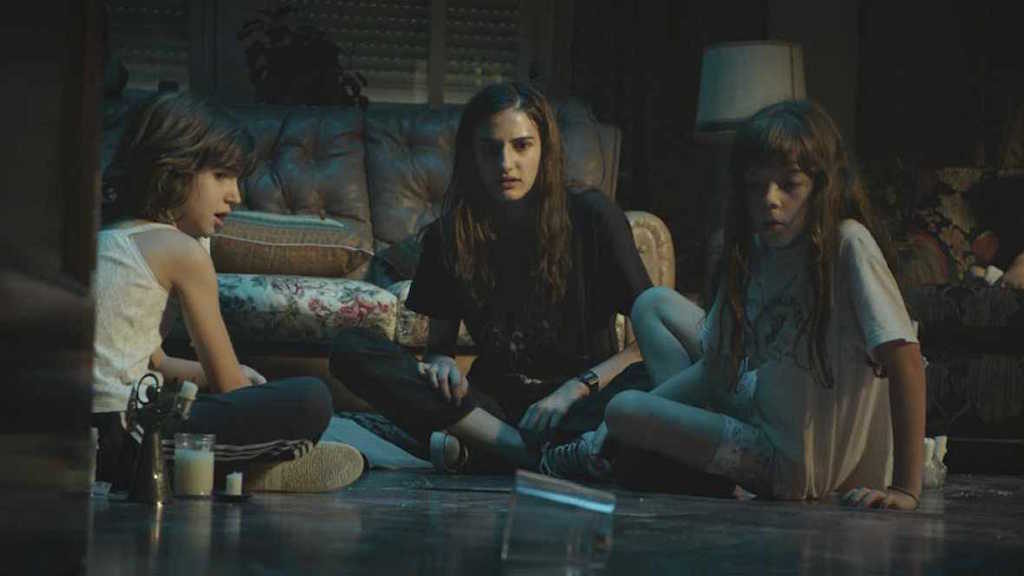 After the séance, things go haywire in Verónica’s apartment. Hot water seemingly turns on by itself, scalding her little brother in the bathtub. Silhouettes appear on the bottoms of mattresses that look like they could either be burn marks or mold. A shadowy figure walks through the apartment, visible only to Verónica. And that is all before Verónica starts to act…strange.

If this all sounds familiar to seasoned horror fans, that’s because it largely is. There is even a spooky blind nun who gives our hero cryptic advice, for god’s sake. What makes the film worth seeing is the care that Plaza and co-writer Fernando Navarro put into the characters with Verónica emerging as a resourceful heroine in over her head, but who is nevertheless sympathetic and believable. She is ably supported by Bruna González and Claudia Pacer as her bickering, hilarious younger twin sisters. They provide the perfect amount of comic relief without ever becoming annoying or tilting over into false movie kid cuteness.

VERÓNICA is purported to be based on true events. I cannot speak to the accuracy of this. I wish Plaza had not made this claim because it only seems to exist in the movie to provide an unearned X-Files-like ending that is intended to be eerie, but that struck me as silly.

Despite my issues with the film, it is still an entertaining horror flick that indulges in some clichés and over-used imagery, but overcomes those stereotypes with winning character work and performances. Watch it alone on a dark night and it will give you a jump because of just how much you wind up caring for Verónica and her sisters.