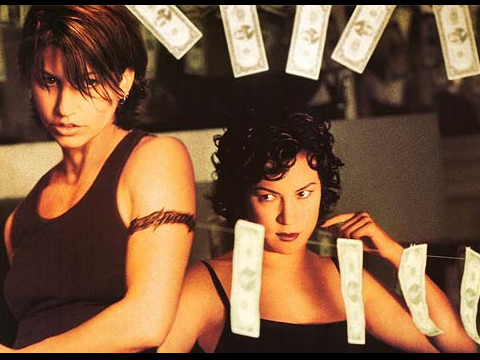 Chicago has a lot going for it. People there can survive any climate because the weather routinely loses its mind (the city’s motto: “Don’t like the weather? Wait a few minutes.”). It’s big enough to be important, yet out of the way enough to not have developed the pretentious trappings you find in those other big cities. It’s home to some of the best museums and theatres in the world. A plethora of different cultures and creeds reside there that people have the capacity to learn much about life and the world. All these things lend themselves well to breeding artists far more unique than what everyone’s used to, if only they’d take the first step. Lana and Lilly Wachowski have taken so many steps that they’re practically skipping. All the while, never forgetting that they’re Chicagoans and what that means. There’s this Easter egg in THE MATRIX REVOLUTIONS, for example, Michael Jordan fans would appreciate.

The fandom goes further down the rabbit hole. The dojo fight in THE MATRIX happened during the playoffs, and Morpheus’ flying knee was shot as MJ got nothing but net. It wasn’t the best take, but the Wachowskis picked it anyway. For Jordan.

In their previous regenerations, Lana and Lilly made their way to being filmmakers by first being carpenters. After going through so many disappointments, their rationale was that they would work their way up to building their parents a house, then retire from everything. Luckily for us, they managed to sell a script by then. Unluckily for them, it was ASSASSINS. The original script dealt with ideas of identity and how different worlds demand different moralities. Dino De Laurentiis’ studio optioned it for a while (renting ’til he bought it, basically) for $10,000 each time, which was like winning the lottery, for them. Then Dino bought it for $250,000, and they felt like they could live like royalty. Then Dino sold it to Warner Bros. for seven digits, and they got a taste of how conniving Hollywood can be. Then they saw ASSASSINS and thought, “Never again.” However, something happened because of the bastardization of their script that would change the Wachowskis forever. 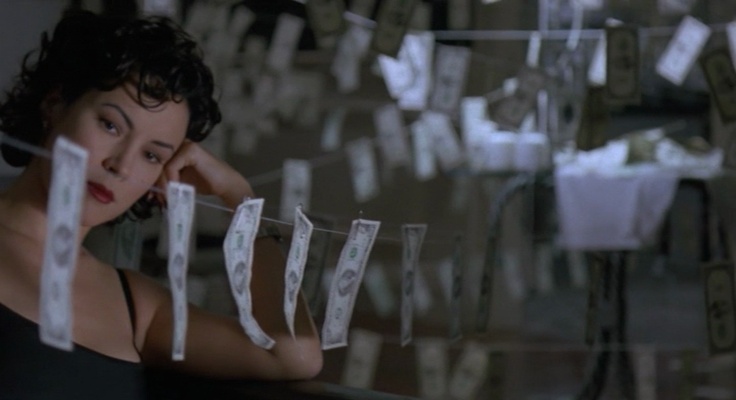 When Lana saw SILENCE OF THE LAMBS when it was released, in her previous regeneration, she ran to the bathroom to react strongly and hurt. Jame Gumb was the final straw for a community tired of seeing themselves represented as jokes, murderers, or victims. Jonathan Demme did a mea culpa with PHILADELPHIA, but Lana was still affected. After ASSASSINS made him a pile of money, De Laurentiis asked the Wachowskis if they had more scripts. With those Buffalo Bill frustrations still churning, they came up with BOUND. They wanted to see a film about three-dimensional lesbians who survived at the end. Even by the ‘nineties, women had a hard time lasting in empowering movies. Although THELMA AND LOUISE was very popular, they still died at the end (fun fact: they didn’t, in the original script). The Wachowskis prepared an elaborate scheme to describe BOUND to Dino because no one was really looking for a lesbian noir. Turned out, they didn’t need to. The leads being lesbians was the thing that sold him. But perception is a funny thing, and his idea of lesbians would collide hard and fast with their idea. 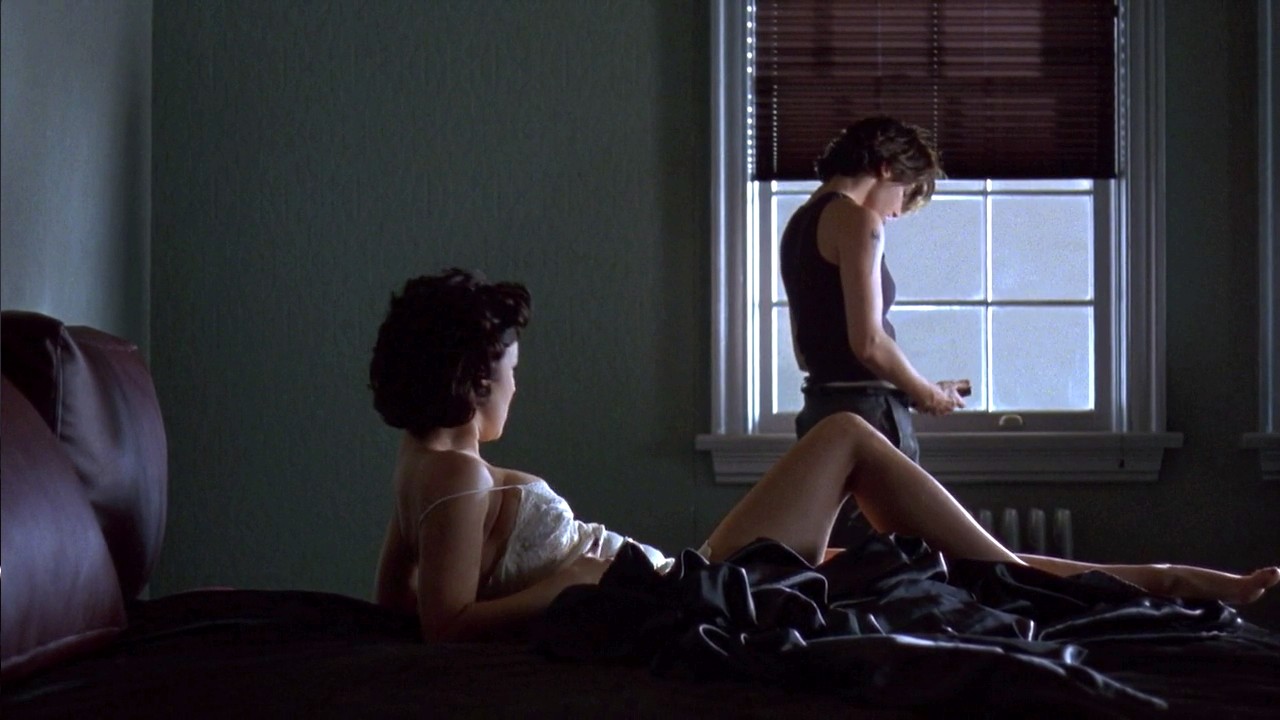 Wanting to get on the good side of the lesbian community as soon as possible, the Wachowskis sent the script to some of the more renowned ladies for their approval. As a thank-you, they got the chance to be in the bar scene at the beginning. This was also the first scene shot. Dino makes sure that he’s the first person to see footage of all the movies he produces, and he was dumbfounded when he saw the bar scene. He then told them that they had to reshoot it. To him, those women weren’t lesbians. Lesbians were the models in his big casting book, not the ones who look like how most women do. They fought him on it and won, but then he disowned the Wachowskis and didn’t do much of anything with them afterwards. Which ended up being a great thing for them because they were also left alone creatively. It comes off the screen, their creative freedom. Many things in BOUND might not have happened if Dino kept his eye on them, and some things would not have. Like Corky and Violet’s happy ending. 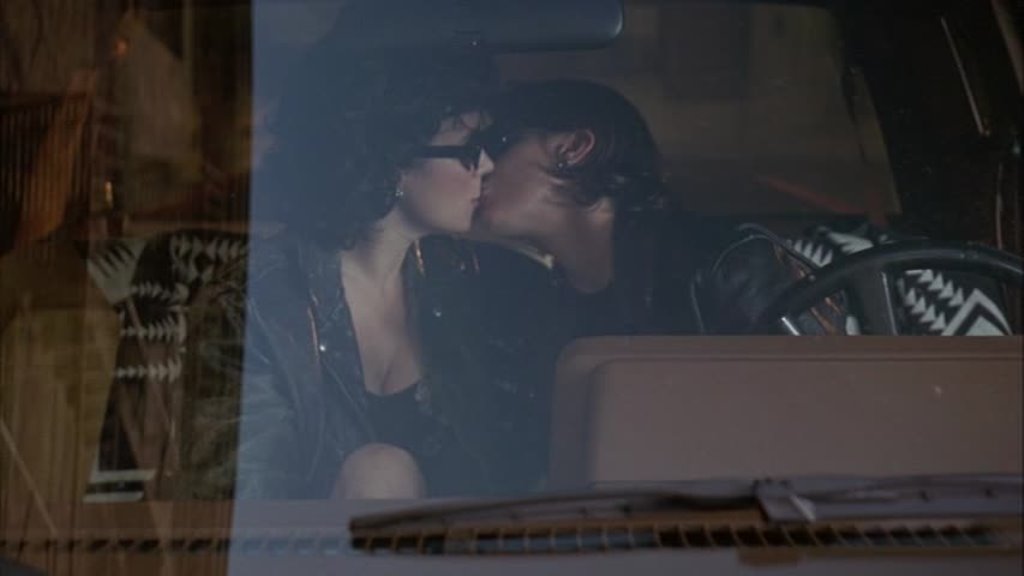 After the success of BOUND, the Wachowskis were able to sit at the big Warner Bros. table and get their next film made. It wouldn’t be easy but then, it rarely is. They would have to convince the money people that their batshit script about a computer that used people as batteries needed the cash it did. So they storyboarded the fuck out of it with the help of two comic artists: Steve Skroce and Geof Darrow. Then they got the perfect cast for it. Then they found somewhere to shoot that was affordable, yet didn’t compromise them visually. Actually, there didn’t seem to be much compromise in THE MATRIX. Or the rest of their filmography, for that matter. Lana and Lilly Wachowski got it done, like the Chicagoans they are.