Looking at the slate of repertoire screenings at this year’s Cinepocalypse, one film offering stands out from the rest. KILLER KLOWNS FROM OUTER SPACE, HOWARD THE DUCK (in 70mm?!), and DEMON KNIGHT all have the glean of midnight movie trashiness. This isn’t to say they aren’t a helluva lot of fun to watch with a thirsty crowd, but these are classics for all the wrong reasons. But then, on the fest’s second to last night, BOUND was on the schedule.

Presented by Lana Wachowski herself, and screened off of her personal 35mm print, BOUND is a film remembered for entirely different reasons. As someone who attended a notoriously queer-friendly women’s college in the late 1990s, I could not escape the poster for this film. Nearly every bedroom along our hallowed halls featured a large portrayal of Gina Gershon and Jennifer Tilly exemplifying the butch-femme dichotomy embraced by so many lesbian communities of that era. These women are assaultingly gorgeous, and often featured in the poster as being surrounded by garlands of money, which only adds to their dreaminess.

While some of the film’s staying power comes from the female eye candy on screen, there is plenty more to like here. The audience at Cinepocalypse was playful at first; laughing at the dated telephones (they have cords!) and the heavily suggestive noir-esque dialogue, but after the first 30 minutes or so they were rapt. This was not a film presented to be laughed at; it was a film to be savored.

To this day it is hard to believe that BOUND is the work of novice directors. We all know the Wachowskis went on to have a mixed career, but no one can rightly accuse them of making films that lack strong vision and clear voices. BOUND is no exception to that pattern, as the film’s visual style is impressive even to modern audiences. The camera bobs and sways around the set, and uses innovative angling to make the audience feel more like voyeur neighbors than removed observers. The set design and casting also make the film feel much bigger than the apartment building that contains it. 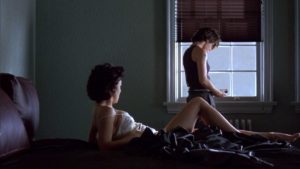 But beyond the truly competent visual story telling is a plot that does not age. Mafia bosses, death, love, and scotch all blend together for a twisted plot that keeps you guessing the entire running time. Though some could sappily argue that the main takeaway from the plot is that love always wins, I take a different stance. My take on the film is that underestimating women will lead to trouble. Big trouble.

After the audience happily lapped up all 108 minutes of the film, Lana took the stage to answer pre-selected questions from the audience. I was anticipating some solid introspection from a Hollywood veteran, but I did not expect her to be so damn funny. She told tales of her and Lilly working as carpenters before their first script was sold, how she was upset by the portrayal of trans characters in SILENCE OF THE LAMBS and DRESSED TO KILL, but best of all she treated to audience to her impression of Dino De Laurentiis (executive producer on BOUND). Her candor and honest reflection is not always a given in these film fest Q&As, so this was a real treat for us.

The experience of watching a schlock-free repertoire film at Cinepocalypse makes me hope that they will consider keeping up the trend. So many film fiends like both trash and treasure in their catalogues, and the excellent screening of BOUND proved that rule.