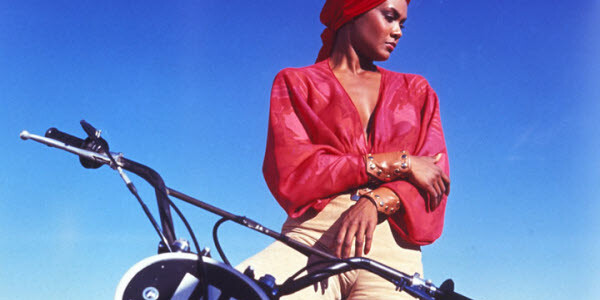 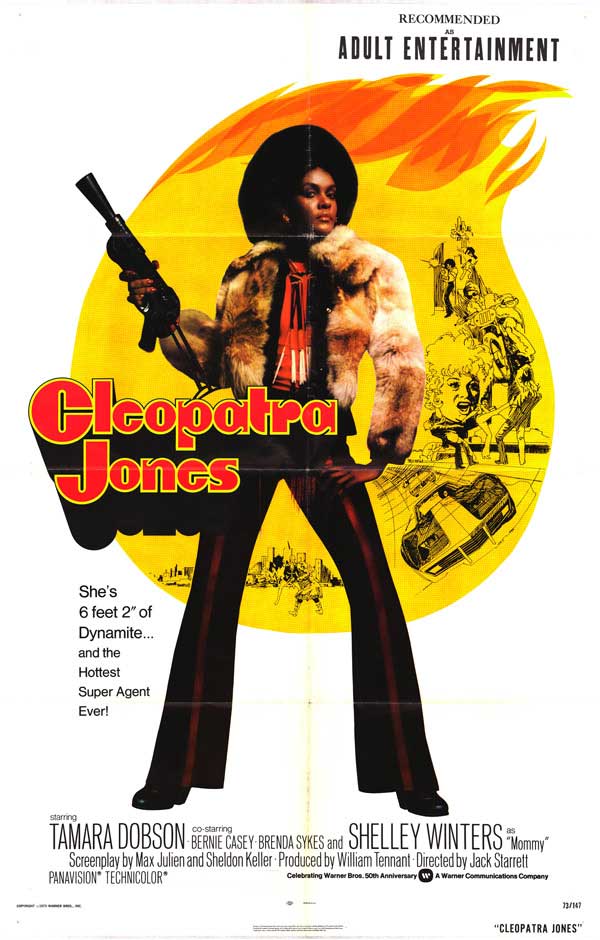 Warner Bros jumped on the blaxploitation bandwagon in the early 1970s with this ripsnorting and funky live-action comic book pitting African-American Amazon Tamara Dobson against Whiny-WASP-Whackjob Shelley Winters. The story jumps right in as US Special Agent Cleopatra Jones (Dobson) arrives on foreign soil and takes over an operation to blow up some poppy fields — thus allowing this film to thumb its nose at James Bond, who had to blow up poppy fields as his climax in the concurrent 007 release LIVE AND LET DIE — but Cleopatra Jones is just getting started, baby! We then pop back to the States to discover this legally sanctioned pyromania has not gone down well with the Crime Queen known as “Mommy” (!) (Winters). This hit to Mommy’s pocketbook has torked her off royally – and now she wants Cleopatra Jones DEAD. 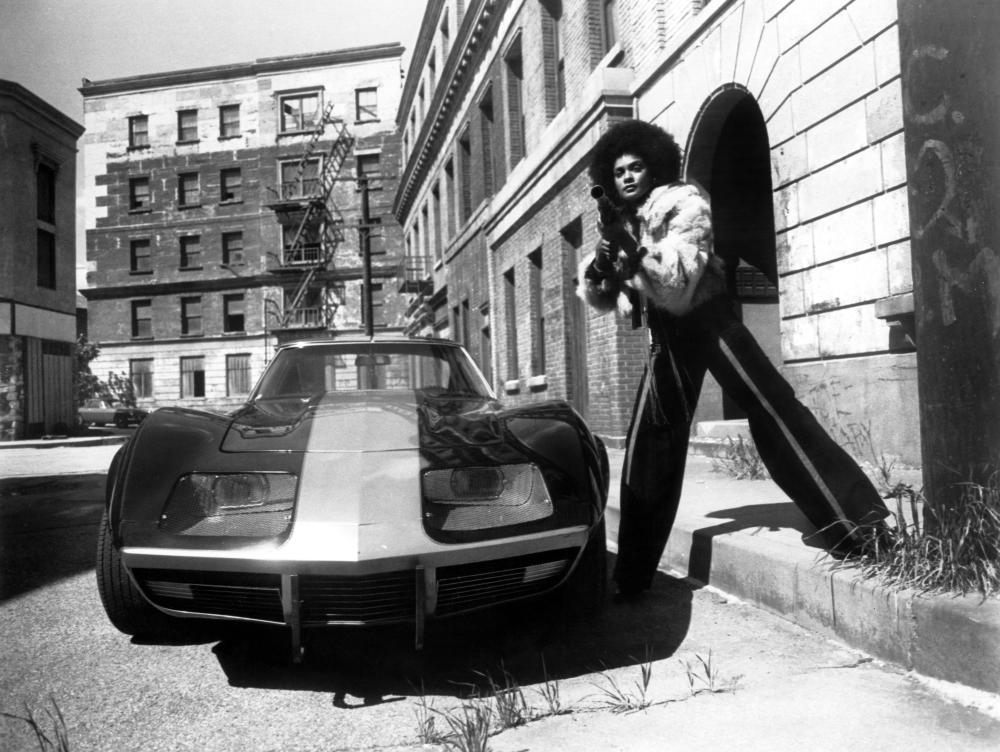 Mommy scores first blood by somehow causing a local community center Cleo watches over to be hit by a surprise drug raid. Center honcho Reuben (Bernie Casey) knows there are no drugs to be found — but then, some are. This brings Cleo running back to the U.S., and we get to sit back and watch as the lithe Ms. Jones cleans the clocks of several of Mommy’s henchmen, mainly through the use of a not-particularly-fast style of kung fu that is nonetheless devastating to those it is used on. And while the two ladies circle each other at a distance, Doodlebug Simkins (Antonio Fargas), an enterprising lieutenant in Mommy’s army, begins to cut the apron strings and stakes out his own territory, starting with some of the film’s running time, as this becomes the major subplot in the picture.

And although this puts Mommy at the disadvantage of battling on two fronts, she is more than up to the task, sending her minions out to do the dirty work while she lays back, scheming her dark schemes and periodically bellowing orders that sometimes only dogs can hear. Will even so formidable a woman as Cleopatra Jones be able to topple Mommy and her crime empire?

The Blaxploitation era started out with glimmers of the genre appearing in two studio-released movies: THEY CALL ME MISTER TIBBS and COTTON COMES TO HARLEM, both released in 1971. And then — as these things often do — in the independent film world, a talented filmmaker built on those elements; in this case Melvin Van Peebles and his classic SWEET SWEETBACK’S BAADASSSSS SONG, which is now acknowledged as the first film in the Blaxploitation cycle, released in 1971. After that everyone got in on the game, with more studio efforts — like SHAFT — and more independents — such as SUPERFLY — hitting the big screen on a regular basis as the 1970s continued. Most of these efforts were hard-edged R-rated flicks, with copious amounts of profanity, nudity, and graphic violence flying every which way onscreen. In an attempt to bring in an even bigger audience than was usual for these popular motion pictures, Warner Bros. decided to pull back on those elements a bit for their CLEOPATRA JONES, going with a PG rating. Sometimes this just results in a watered down product, but not here — this movie still has an edge; there arestill drugs being dealt, people being shot, and plentiful action like chases and fights, and it works! Colorful and fast moving, the flick plays out like a Big-Screen Comic-Book, and it is a lot of fun! 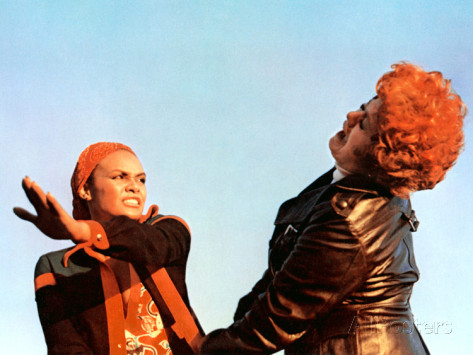 The film is directed by Jack Starrett, and this interesting fellow deserves a quick digression: Starrett started out as an actor, appearing in several biker movies in the ’60s (like Al Adamson’s HELL’S BLOODY DEVILS). He also played Gabby Johnson in BLAZING SADDLES! He moved into directing, making several low-budget action flicks that are all worth a look. After that it was back to acting, with his other most recognizable role being the nasty Deputy Galt — who wants to shave Rambo… dry —  in FIRST BLOOD in 1982. Wild! And digression over. 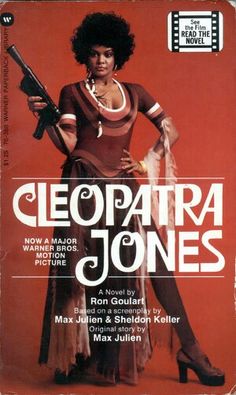 Starrett handles his duties just fine here, making the most of the script by Max Julien — another actor! — best known as Goldie in THE MACK — and Sheldon Keller. The pace never flags, and the mayhem is orchestrated well and dealt out in regular doses. 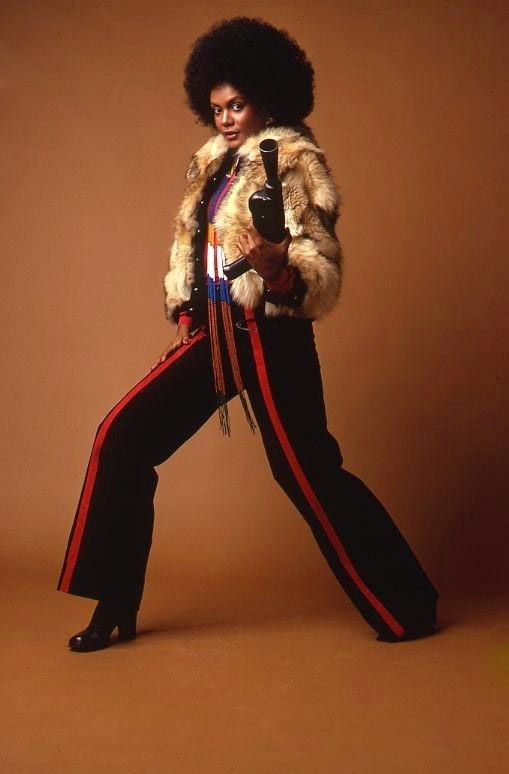 The late great Tamara Dobson is spectacular as Cleo; tall (6’2”!), dour, sardonic, and funny. She’s not the fastest martial artist I’ve ever seen, but no matter how fast or slow the actress is, the character is exactly fast enough to lay waste to anyone foolish enough to challenge her. That the martial arts sequences were choreographed by Master Bong Soo Han (Klan from the “Fistful of Yen” segment of KENTUCKY FRIED MOVIE) just makes them all the cooler. Shelley Winters reaches her screechy peak here, allowed by Starrett to not just chew the scenery, but to consume it in great fist fulls. She’s a bit shrill, perhaps, but perfect for the movie. The supporting cast, led by the always-welcome Fargas, are all up to the game, sailing through with just a hint of a wink here and there. Standouts include Albert Popwell (the baddie in the original DIRTY HARRY who “gots to know…”, and a supporting cast member in all of the sequels) and Caro Kenyatta as the brothers Johnson — two tough guys with hearts of gold enlisted by Cleo to assist her Mommy-mashing mission; and Bill McKinney, always hissable as a baddie and the reason Ned Beatty hasn’t had a prostate exam since DELIVERANCE. You also get a cameo from Mr. Soul Train himself — Don Cornelius! And an extra shout out goes to Paul Koslo as one of Mommy’s most vicious henchmen, pulling off a successful British accent and saddled with the worst hair he’s ever sported cinematically. 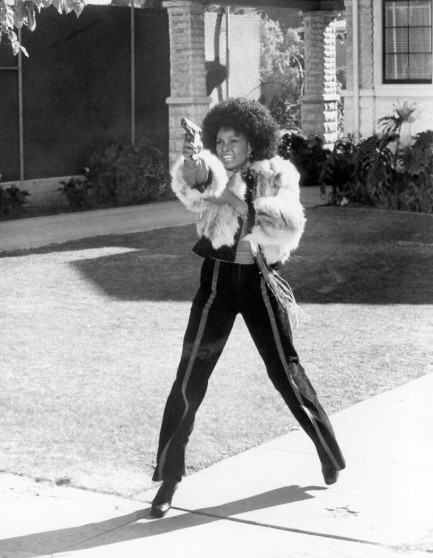 Speaking of cinematic, Dobson’s fashions — designed mostly by the lady herself — must also be mentioned. They are amazing, and Dobson wears them all with panache. My favorite is a kind of three-toned bathrobe dress, split to the bellybutton, with Dobson in red nylons and platform heels — the actress cuts quite a figure in this outfit, and it gets well-nigh incredible when those long legs come flashing out in kung fu kicks.

But it’s time to wrap this one up — the movie is a splendid piece of cinematic bubblegum, highly recommended to action junkies, so definitely check this one out!