Since 2005, the guys at Vagrancy Films have been touring Canada and the United States, putting on shows of little-seen flicks in 35mm prints, coupled with trailers, commercials and oddball miscellany keeping audiences simultaneously entertained and horrified. However, if you haven’t managed to make it to one of their shows, you’ve been out of luck when it comes to taking in the experience. 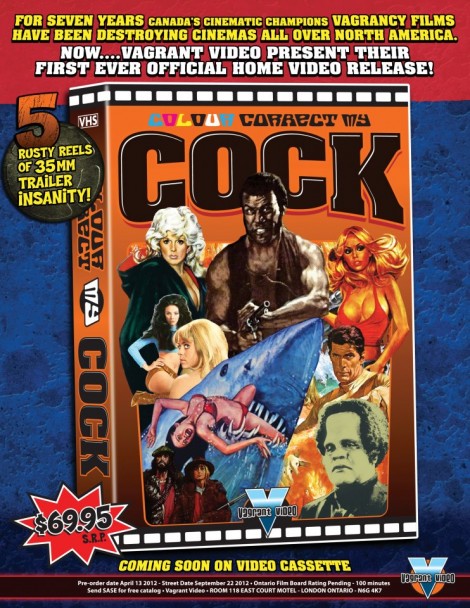 This has been corrected with the release of COLOUR CORRECT MY COCK, a trailer compilation by Vagrant Video, just released on DVD, Blu-Ray and VHS(!), and available at finer conventions everywhere and below. More a raucous mix tape focusing on trailers than the likes of Synapse’s 42ND STREET FOREVER series, the compilation by James Bialkowski and Jacob Windatt features nearly two full hours of exploitation goodness, couples with promos, a fair share of random clips and a few Canadian-centered ads that should be new to those of us in the United States.

The compilation opens with a hastily-made “introduction” showing the duo working in their office. After a couple interruptions involving their buxom assistant bringing in the mail (entertaining) and a burly biker-looking guy giving them a shot at filming a passed-out girl (kinda needless), they read a letter from an unnamed producer who rejected their trailers, most likely a quick potshot at Synapse producer Don May, Jr. Thankfully, this starts off the actual features of the comp — the trailers themselves.

The trailers begin with SEX ON THE RUN, one of the many retitlings of the 1977 Tony Curtis period sex farce CASANOVA & CO. that tries to trade in on his SOME LIKE IT HOT notoriety by showing Curtis in a dress a lot amidst the many topless ladies, including Britt Ekland. (One of the other titles was SOME LIKE IT COOL.) More sex follows with DAGMAR’S HOT PANTS INC., one of the many fun, flighty Swedish sex comedies in which loads of nubile ladies sleep with older ugly guys – sadly, the print is in pretty bad shape. Next up is a German trailer for the obscure 1976 sex flick WEßE HAUNT UND SCHWARZE SCHENKELN, which is apparently about different people having sex in various dark rooms with weird lighting and no walls. According to the IMDb, Jess Franco is in this?

We then move briefly from copious nudity with DEATH ON THE RUN, a fun-looking Sergio Corbucci spy thriller starring Ty Hardin that, according to the dialogue-free Dutch trailer, was also released as DJANGO’S OVERMAND, even though it takes place in the modern day! Next up is Disney’s football-playing mule flick GUS (“Can this mule outsmart Ed Asner?”) and an advertisement for the 1977 Canadian Film Awards, featuring the likes of Richard Benner’s great OUTRAGEOUS! and the Bud Cort-starring WHY SHOOT THE TEACHER.

The original German-language trailer for Martin Walz’s entertaining KONDOM DES GRAUENS (released by Troma as KILLER CONDOM, sans this trailer) follows. The FIVE MAN ARMY trailer promises an action-packed spaghetti western with Peter Graves, Bud Spencer and the token Asian actor playing “Samurai.” The ad for the Children’s Film Festival shows off bits of a half-dozen short films released together from the National Film Board of Canada as one film, including the 1962 short CHRISTMAS CRACKER co-directed by Norman McLaren and Grant Munro.

The English trailer for 1960’sToho-produced detective thriller THE LAST GUNFIGHT promises “Bloody hate! Merciless Gun Law!” and delivers Toshiro Mifune being poorly dubbed. The look of the trailer leads me to believe the stateside release was at least half a decade later, if it was released as all – the boys on the commentary don’t seem to think so. SONNY AND JED is another Corbucci western, this one a comedic-looking flick starring Tomas Milian, Susan George and the ever-welcome Telly Savalas. 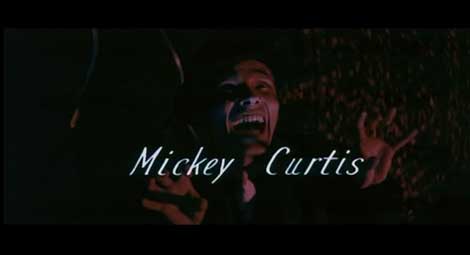 UNDERGRADUATE GIRLS is a U.K.-release trailer for the Italian schoolgirl sex comedy THE TEASERS, a different trailer for which appeared on one of Something Weird’s DUSK TIL DAWN collections. The trailer for GODMOTHER II is a real find, a retitling of 1973’s Italian crime pic LA PADRINA (aka LADY DYNAMITE) with an ass-kicking Lidia Alfonsi, from the director of the post-apocalypse pic URBAN WARRIORS.

TRIPLE IRONS is a typical Run Run Shaw martial arts flick trailer, because you always need a couple of those in any self-respecting trailer comps. THE ABDUCTORS is the second in the trilogy of GINGER films, starring Cheri Caffaro as a buxom secret agent, and it does a fine job at selling the film’s sex-and-violence heavy content.

The trailer for BLACKENSTEIN does what it can to sell the film, but nothing can convince me to go back and give this turd a rewatch. Rene Cardona’s TINTORERA gets a quick teaser with a good score that similarly sells it as being a much more interesting movie than it actually is. 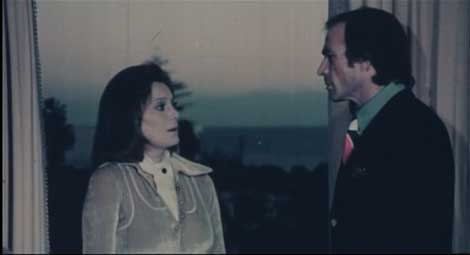 More martial arts crop up in THUNDER KICK with Bolo Yeung, followed by an all-too-brief teaser for the late ‘80s “electrocuted prisoner back from the dead” flick DESTROYER. It’s an odd (though welcome) inclusion, made even more odd by the fact that its’ star’s name (Lyle Alzado) is never mentioned, which would seem to be the only reason the movie was made, and the biggest name in the film, Anthony Perkins, doesn’t appear in the trailer at all!

VIVA DJANGO tries to sell the audience that it’s “the ‘REAL’ Django” despite the fact that it’s Terrence Hill, not Franco Nero, in the lead – it’s 1968’s DJANGO, PREPARE A COFFIN, not to be confused with 1971’s VIVA DJANGO with Anthony Steffen. THE SEVEN DWARFS TO THE RESCUE is an amazing-looking B&W Italian fairy tale flick that sat on the shelf for 14 years(!) before getting released to the States in 1965. The dwarves fight giants and go to an underwater city! Has anyone ever seen this? 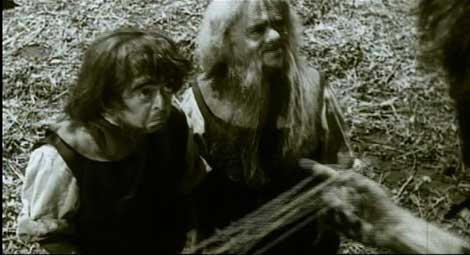 The second and third films in Byron Chudnow’s four-film series of bank-robbing dog films THE DARING DOBERMANS and THE AMAZING DOBERMANS feature great casts and lots of dogs running around. Ishiro Honda’s LATITUDE ZERO is an odd Japan/US co-produced sci-fi flick “where the past merges with the present to predict the future” with an international cast, including Joseph Cotton, Cesar Romero and Richard Jaeckel.

THE GREAT SCOUT AND CATHOUSE THURSDAY is a goofy-looking western comedy starring Lee Marvin, Kay Lenz and Oliver Reed as a half-Native American. The awesome trailer to GHETTO FREAKS is next, and while I’ve seen it before, the promise of “freaked-out, sex-crazed white chicks” is always welcome. MADAME AND HER NIECE is a German period sex comedy with Edwige Fenech as the “niece.” 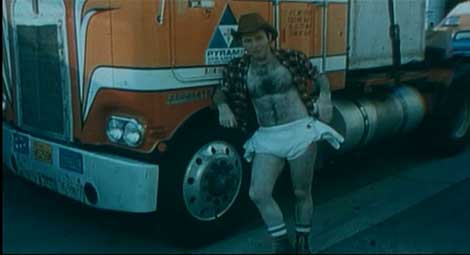 The trailer for CRACKING UP sells it as TUNNELVISION-like, which is fair, but despite its’ cast (including Michael McKean, Fred Willard, Harry Shearer and the Firesign Theater, is pretty lame. The trailer, however, does have Edie McClurg saying “That’s All Folks!” MASTER GUNFIGHTER is a Tom Laughlin western that looks a lot less dull than it actually is thanks to a well-paced trailer.

Connie Stevens kicks ass in the great SCORCHY trailer that follows. MARCO THE MAGNIFICENT, a studio epic about the exploits of Marco Polo, looks amazing and is probably the most-expensive film represented on the set, with a cast that includes Orson Welles, Omar Sharif and Anthony Quinn as Kublai Khan! The collection ends with another spaghetti western (COMPANEROS) and Fred Williamson’s THE SOUL OF NIGGER CHARLEY, which has remained unfairly obscure due to its’ title.

Along the way we also get a Canadian advertisement against drinking, the theater encouraging the audience to buy gift certificates “in gay gift envelopes” for the holidays (the fabulously foppish bunny on the Easter segment concurs), silent footage of a trio of swimming naked ladies from a lost Joe Sarno film, a reminder to fill out your 1981 Canadian census forms, and a bizarre Dudley Do-Right rip-off called “The Perils of Regine.” There’s also the often-included Smithfield BBQ commercial, which somehow manages to be offensive to blacks, native Americans, Asians and Mexicans within 30 seconds, backed by the sound of “Dixie,” and a splash of Asian porn which seems a bit overlong and out of place, as while it’s explicit, it’s not really weird enough. Still, it’s a small mark against an otherwise highly entertaining roster of psychotronic ephemera. 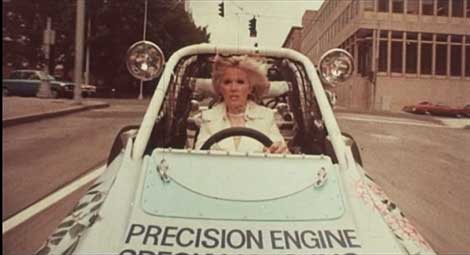 The disc features a commentary track by Bialkowski and Windatt, and the two mostly eschew talking about too much about the films themselves and talk more about how they acquired the trailers and what audience reaction to them was when they were screened. It’s certainly different from the Synapse route, as you don’t really get a sense of where the films themselves came from, but it works, as the duo are genuinely passionate about their work, and the actual distribution, collection and reaction to the trailers is something that’s rarely talked about. In fact, the commentary track only falters when they talk about the films directly, as they resort mostly to dead space in between mentioning what’s on screen.

In short, COLOUR CORRECT MY COCK is a lot more haphazard and unpredictable than most trailer comps, but that’s certainly not a bad thing. The equivalent to spending two hours watching crazy-ass movie stuff with a couple guys that really know their crazy asses, and a more than welcome addition to any cult film library, this is one comp that should be at the top of your Christmas list, best paired with a case of the cheapest, shittiest beer you can find. 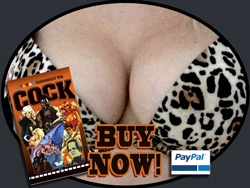