The idea of a sports figure with very little to no acting abilities starring in a film, shadowing their personality as a screen persona, would probably not raise any eyebrows these days. It’s 2017 and anyone can be an internet celebrity with a hit song on YouTube in the summer and have a Netflix movie deal by Christmas. If people recognize your face, your gimmick or your moves—and most of all, people like you—you’re as good as gold. A good hook or a crazy stunt that bewilders some folk always helps.

The silver mask of Santo. 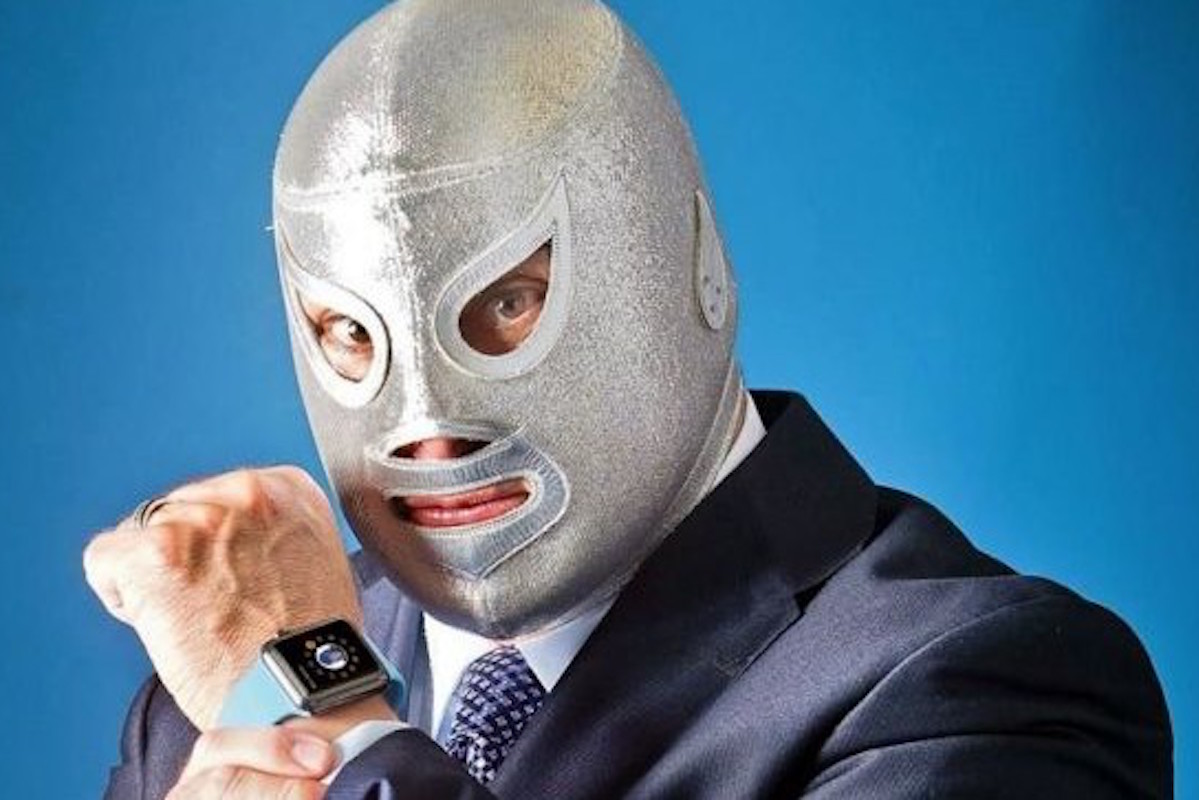 Santo was born Rodolfo Guzmán Huerta, but that is not who we’re going to talk about. Instead, we’re going to talk about the face the whole world knew: the silver mask of Santo. The Saint. A Luchador. A Mexican champion wrestler who started his career on the canvas as a Rudo, one of the bad guys, the meanies who pull tricks to win the matches.  In his day to day, El Santo went by Rodolfo Guzmán Huerta and made his debut in the ring in 1934. He played many characters throughout his career, usually as one of the bad guys (or as they say in the industry, a “heel”). He went by Red Man, Masked, Murciélago II and many more before he debuted the Santo character in 1942 at the famous Arena Mexico. Santo believed in himself as a better being, and his turn to the light side—turning face—was inevitable. Coming to the ring in a silver mask, he was quickly embraced by the wrestling fans in attendance. He was respected by the fans and his opponents for being very technical and quick but El Santo became known as an honest fighter, who didn’t use dirty tricks, have drama or was involved in scandals.

Before Santo made his debut on the big screen, he created a following outside of the squared circle by debuting in comic books. Most written by Mexican comic writer and artist Jose Guadalupe Cruz. Santo quickly became the number one comic superhero in Mexico and also appeared in pulp novels that rocketed him into literary history where his comic and pulp novel adventures averaged a million readers a week. The strip Santo, el Enmascarado was reprinted hundreds maybe even thousands of times in weekly magazines.

Santo was a star in the ring, and when the bouts began their transmission via the tube, he was also the biggest thing on the airwaves. Ask any TV salesman from 1950s México, they’ll tell you people bought televisions for one reason only: Lucha Libre. It was a no brainer: the good versus the evil, the public cheering for a heroic figure to overcome obstacles…and he always won. 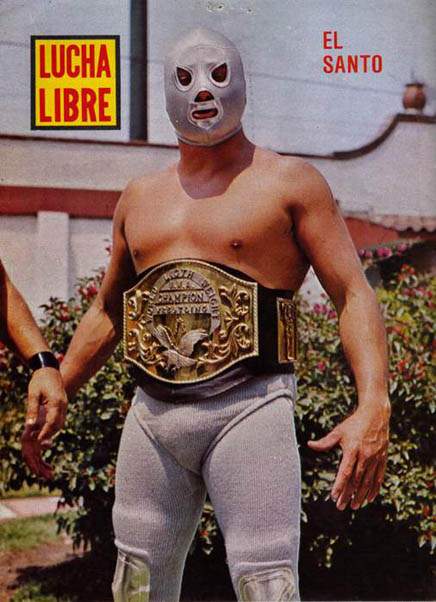 Moving Santo to the big screen was a no-brainer for a public that cheered for the heroic figure to overcome obstacles. Yet with the first Santo movie, the filmmakers got it all wrong. The masked figure Santo was the baddie, and wasn’t even played by the Luchador. That changed with SANTO CONTRA CEREBRO EL MAL, the first film featuring Santo—but not starring him—fighting a rogues gallery including werewolves, zombies, vampire women, witches, corrupt politicians, and even punching those scum of the Earth: Nazis.

There’s a lot to be said about the quality of these films, a joke to many natives of México who would rather be caught watching ‘Novelas’ (overdramatic Mexican soap operas, if you live under a rock). Yes, it’s true Santo’s voice was dubbed in post production for all films because of a lifelong speech impediment. And yes, the stories were ludicrous and the scripts were hastily drafted with plot holes large enough to drive a semi through. Mexican film has the unique distinction of creating genre with idiosyncratic themes and characters, like Rancheras and De Revolución. One of these genres is Luchadores (think Japan’s Chambara or Kaiju films), and Santo is without a doubt the star of the Luchadores genre. 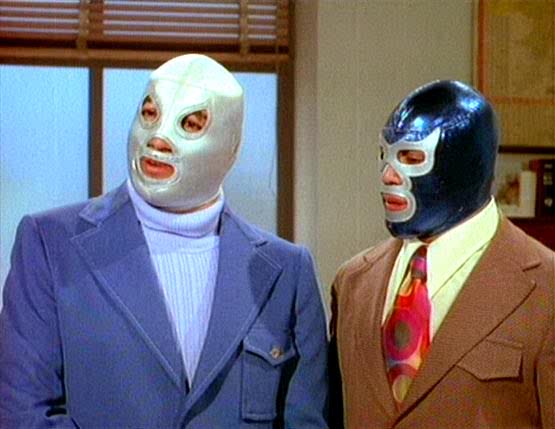 The first films made to feature Lucha Libra started filming on January 14, 1952. One was called LA BESTIA MAGNIFICA (LUCHA LIBRE) by director of Mexican drama films Chano Urueta. That same year he directed three more Lucha Libre films: EL LUCHADOR FENOMENO, HURACAN RAMIREZ, and EL ENMASCARADO DE PLATA. It was in the movie EL ENMASCARADO DE PLATA that the character of El Santo debuted. In this first movie El Santo did not play himself but was played by another famous wrestler called The Physician Assassin. In that movie El Santo was not the hero everyone knew but a bad guy. The film is also distinguished by the fact that it was half filmed in Mexico and half in Cuba.

EL ENMASCARADO DE PLATA was the film that really launched Mexican wrestling movies and they became popular for decades to come. Santo’s movie debut was in 1958 in two films directed by the Rodriguez brothers: SANTO CONTRA EL CEREBRO DEL MAL and SANTO CONTRA HOMBRES INFERNALES. Both films were made in Cuba. The Rodriguez brothers didn’t have much confidence in these movies so they are poorly made and rely heavily on improvisation and not much plot. Curiously, the films were finished the day before Castro entered Havana and declared that the Revolution was a success. 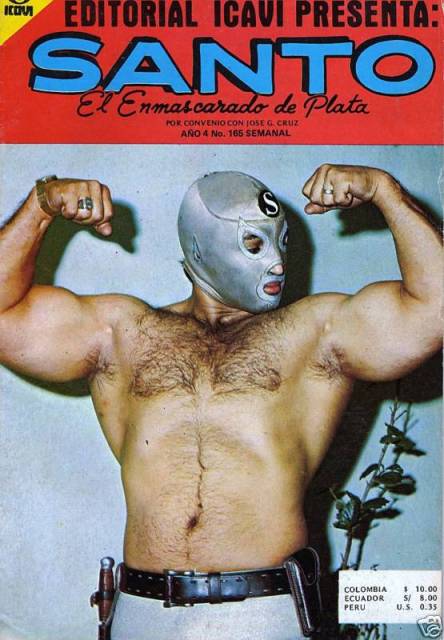 SANTO CONTRA LOS ZOMBIES in 1961 was the movie that launched El Santo and his movies into mainstream Mexican Cinema. That year, four more Santo movies came out with him battling a wide variety of foes for various causes. The film that really put El Santo in the international movie scene was SANTO VS. THE VAMPIRE WOMEN. In the movie, Santo becomes a James Bond-type, using futuristic gadgets and fancy convertible cars. It also solidified him as a character that fought for justice. His best film was ENMASCARADO DE PLATA. Filmed in Spain it had the biggest budget yet for an El Santo film and was distributed to many countries. The film was a spectacular success. The success of those early films and films to come only enhanced El Santo in the wrestling arena and his matches at Arena Mexico and throughout the country sold out with regularity. He had become a Mexican icon and an international wrestling and pop icon spawning many copycats around the world.

Sadly, on Feburary 5th, 1984, the Legendary El Santo died at the age of 66. Before his death he went on a retirement tour to sold out arenas and his last match was on September 12th, 1982 where he retired as a hero, icon, and pop culture superstar. After his death, the Mexican wrestling movie genre pretty much died with him. El Santo left a legacy of 53 films and a weekly comic strip that ran for 35 years straight. Through his films, El Santo became a hero who fought for justice for the Mexican people. A hero that they could see fight for them on the big screen and then later on seen him literally fight in the ring in real life. His legacy lives on in art, and by imitation. Currently, his son is working on a new El Santo movie and the Cartoon Network had announced a new El Santo animated series in development. His funeral was was the largest ever in Mexican history with millions of fans lining the funeral route. He was buried with his mask on, as he wished.  Every year on his birthday, September 23rd–this year would have marked his 100th birthday, hundreds of fans leave flowers and wreaths at the base of his statue in his hometown in Tulancingo, Hidalgo, Mexico.Currently there is an exhibition in Mexico City in the Guerrero subway station featuring 100 photos of El Santo. 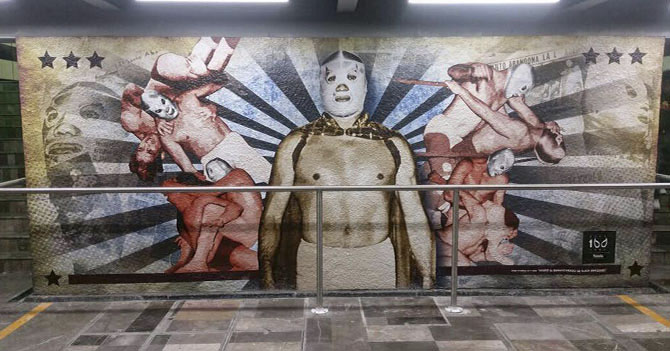