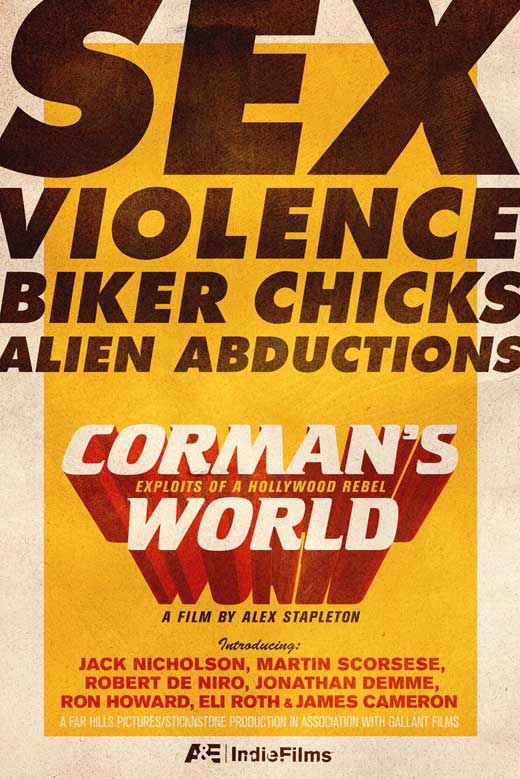 Lets Be Free And Get Loaded!

Early on in the new documentary, CORMAN’S WORLD: EXPLOITS OF A HOLLYWOOD REBEL, we are given the basic philosophy of the low budget movie-making titan, “We feel that the monster should kill somebody fairly early and then at regular intervals through the picture. The first kill should be quite shocking, the other kills can be a little bit less shocking as we build up, and then of course the climax, everything goes, blood all over the screen.” There’s a fast cutting barrage of signature exploitation moments from Corman’s productions: Frankenstein’s Death Racer grinding innocent bystanders under its tires, HUMANOIDS FROM THE DEEP’s titillatingly assaulted skinny dippers, a monster baby gut popping from its mother, and a young Sly Stallone tommy gun screaming. This cavalcade of the mondo bizzaro will bring cheers from die hard Cormanites and laughter from the uninitiated, but both groups will be hooked to this celebration of that special brand of B-movie entertainment, well on its way to nostalgic High Art. 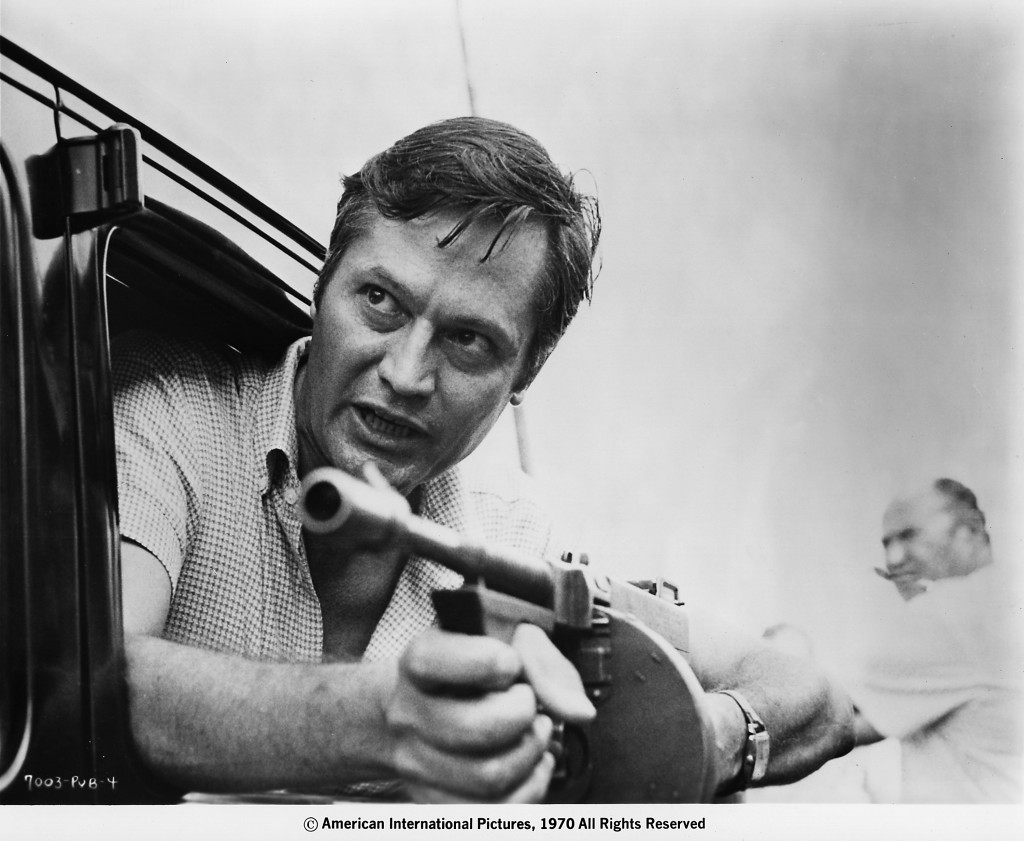 Director Alex Stapleton compiles most of the documentary from one-on-one interviews with the graduates of The Corman School of Filmmaking. Contemporary masters of the craft like Martin Scorsese, Ron Howard, Jack Nicholson, Joe Dante, Jonathan Demme, John Sayles, etc., all of whom cut their teeth within Corman’s system; without his well-guarded dollars and his “where there’s a will, there’s a movie” attitude, modern audiences would be without a lot of their favorite bits of Oscar baity Best Pictures. No WILD ANGELS, no EASY RIDER. Simple as that. And how ‘bout the subversive cinema of KILL BILL and CRANK? They owe every shot to the base entertainment of Corman’s price emphasized flicks. 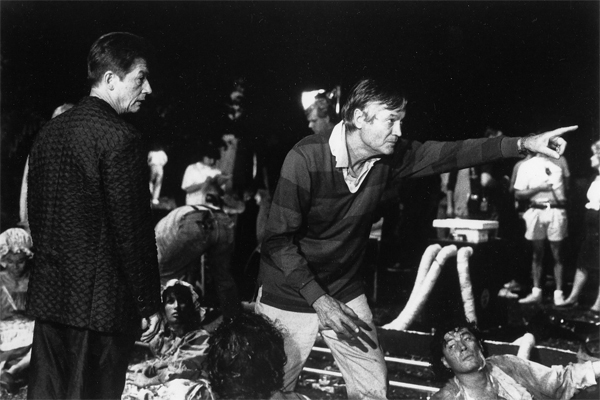 The best bits from the doc come from these in-the-trenches student memories where great love for both Corman and his formula can be found. Jack Nicholson seems to represent the heart of Corman’s World calling Roger not only a “one man band” but his “lifeblood,” the only man in Hollywood who kept him paid for nearly 10 years. And to see Jack Torrance swell with emotion, voiced cracked as he thanks the mogul for his life is mesmerizingly sweet, tender, and endearing. Honestly, it’s a relief to see a participant as grateful for the work as us recipients. 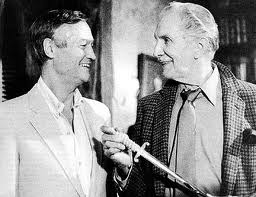 Roger Corman started in Hollywood as a messenger for 20th Century Fox and worked his way up to story editor. After suffering through one awful script after another, he was finally handed a screenplay of quality, Henry King’s THE GUNFIGHTER. Corman claims to have contributed much to this deconstruction of the White Hat vs Black Hat Western and after his story credit was denied, he left the big studio for Sam Arkoff & Jim Nicholson’s Palo Alto Productions, the soon-to-be American International Pictures (AIP). There he garnered a three-picture deal with MONSTER FROM THE OCEAN FLOOR, THE FAST AND THE FURIOUS, and HIGHWAY DRAGNET. A new era in big profit, cheap filmmaking was born. 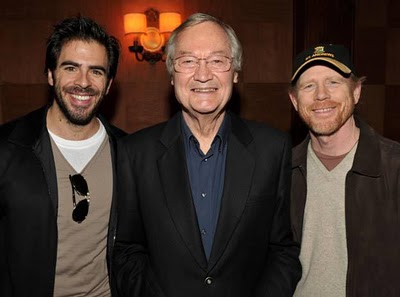 And as is often the case, Corman does not appear to be your typical schlockmeister. His own tastes in film seem to reach for Bergman and Fellini, two auteurs he’s profited from ushering into the U.S. theatrical market. He has a scholarly style of speech and demeanor, and even though ROCK’N ROLL HIGH SCHOOL director Allan Arkush once said that Corman believed that “exploitation doesn’t need plot” just “girls shooting Filipinos outta trees” there are other contemporaries like Robert De Niro who call him “polite… almost British.” And Martin Scorsese rat-a-tat-tats that Corman’s “very, very different from the type of person you’d think would be behind these pictures like Teenage Cave Man.” But Corman acknowledges that his unconscious mind is a “boiling inferno” at odds with the persona he presents to the world outside. And that’s what really speaks to the appeal of transgressive, outlaw cinema. All us bastards relish in the inferno. 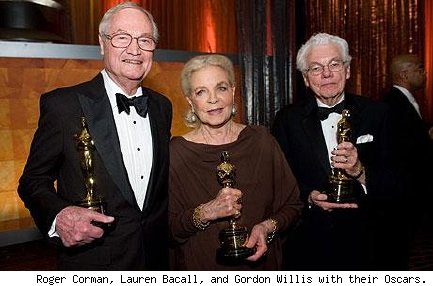 We live in a magical Grindhouse Geek era in which films like BUCKETS OF BLOOD, THE TERROR, and THE HOT BOX are looked back on with great fondness and heartfelt analysis. I’m most certainly a child of grimy VHS rental houses, where it was once a serious challenge to sneak these bloody gems under my dad’s roof. There was a time when he caught me with a box of DEATHSTALKER… gulp. He asked me, “Why do you like this gratuitous nonsense?” I never had an answer for him other than “Cuz.” I think now, CORMAN’S WORLD would be my answer. As Ron Howard states within the first two minutes of the film, “Where Disney movies bring out the child in all of us, so does exploitation.” Amen.