Home  ⁄  The Wire  ⁄  COUNT YORGA AT FIFTY: HOW A SKIN FLICK BECAME THE INFLUENTIAL VAMPIRE MOVIE OF THE ’70s

Subscribe to DG on Patreon and get articles like this one before the rest of the world does! 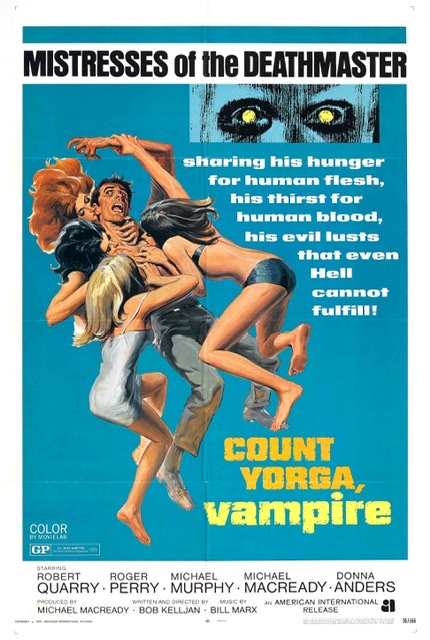 One would think a movie called the “best horror film of the year” by Gene Siskel of the Chicago Tribune would end up on countless “greatest horror films” lists. Yet COUNT YORGA, VAMPIRE has found itself a B-movie oddity, relegated to late, late showings on UHF stations throughout the ‘80s and ‘90s and all but forgotten — if ever seen — by a generation that reveled in the modern horror era of slashers and special makeup effects. More than a low-budget footnote, COUNT YORGA, VAMPIRE is a highly influential take on the vampire mythos, eschewing spooky Victorian castles by bringing the bloodsuckers to contemporary Los Angeles. Its gory, sexy modern sensibility would go on to inspire American International Pictures’ releases throughout the ’70s, as well as ‘80s vampire classics and beyond.

More often than not, since NOSFERATU hit the silver screen, vampires in film were confined to the villages and castles of 18th century Europe. These films opened with a horse-drawn carriage making its way through the countryside, and ended with the honorable Van Helsing doing away with evil…until next time that is. Notable exceptions include Universal’s SON OF DRACULA, which transported the action to 1940’s Louisiana, and 1957’s proto-feminist teenage horror shocker BLOOD OF DRACULA which featured Sandra Harrison as an adolescent atomic-age vampire cast away to an all-girls boarding school. COUNT YORGA brought the vampire to modern-day America in full bloody color as culture and fashion were shifting: the free love era of the late ‘60s was giving way to the cocaine and disco fueled ‘70s, and the popularity of pornographic films was inspiring a new era for libertines.

1970 saw Christopher Lee return as Count Dracula in not one but two Hammer entries, TASTE THE BLOOD OF DRACULA and SCARS OF DRACULA. Meanwhile, in-house director Roy Ward Baker directed Ingrid Pitt in THE VAMPIRE LOVERS, which featured explicit lesbian eroticism. The times were a-changing, and audiences found themselves growing bored with the boilerplate vampire tales that low-budget studios had been cranking out through the ‘60s. New… blood needed to be injected into the genre. 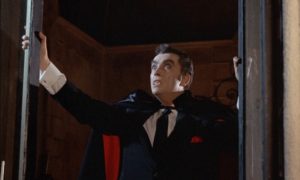 YORGA began its (after)life as a softcore skin flick under the title, THE LOVES OF COUNT IORGA, (that title card is still featured on most available prints of the film). Enter Robert Quarry, an American actor with transatlantic style and wit. Quarry suggested that producer/actor Michael Macready and writer/director Bob Kelljan ditch the softcore element and make a more typical horror picture that could play to teenage audiences in suburban movie houses. “They asked me to read the script,” Quarry explained to New Hollywood Gothique. “I said why don’t you just make a regular horror film out of it? They said will you do it? Of course, I said yes, if it’s going to be a straight horror film.”

Before becoming a genre icon — Quarry would go on to appear in the blaxploitation zombie revenge film SUGAR HILL, as well as several Fred Olen Ray pictures in the ‘80s — Quarry performed in radio plays before joining the Army in 1943. While enlisted, he started a theatrical troupe and upon making his way into filmmaking, he took a contract with RKO and subsequently MGM. But Quarry didn’t find success until taking on the role of the “dashing, dark, and deadly” Count Yorga for AIP.

Quarry would don the cape again one year later for the studio’s THE RETURN OF COUNT YORGA, as well as the foil to Vincent Price’s Dr. Anton Phibes in 1972’s DR. PHIBES RISES AGAIN (it’s rumored that early in the production of the PHIBES sequel, Phibes was to take on Count Yorga himself). At the time, AIP was reportedly grooming Quarry to carry Price’s torch as their new in-house horror star. But the two — despite working together once again in 1974’s MADHOUSE — had a contentious relationship, supposedly incited by Price discovering AIP’s plan to replace him. One tale recounts Price hearing Quarry singing opera in his dressing room during the filming of DR. PHIBES RISES AGAIN. Quarry asked the horror icon, “I’ll bet you didn’t know I could sing, did you?,” to which Price retorted, “well I knew you weren’t a fucking actor.”

Directed by Kelljan, COUNT YORGA was shot independently for a budget of less than $100,000 and distributed by Samuel Z. Arkoff’s American International Pictures. Arkoff retitled the film COUNT YORGA, VAMPIRE, explaining that nobody would know how to pronounce “Iorga” and that horror fans would be turned off by “the loves of,” particularly with the absence of any sex sequences.

Pianist Bill Marx was brought on to compose the film’s score, arguably one of the more traditional elements in this modern vampire tale with screeching strings and creepy organs to punctuate the supernatural happening. Marx was not a prince of darkness, but Hollywood royalty all the same: the adopted son of Harpo Marx and Susan Flemming, Marx had begun arranging music for his father at 16. Marx composed quite a few exploitation scores throughout the ‘70s, returning for the following year’s sequel RETURN OF COUNT YORGA, its pseudo-sequel THE DEATHMASTER, as well as Kelljan’s SCREAM BLACULA, SCREAM, ACT OF VENGEANCE (aka RAPE SQUAD), and the sci-fi cheapie, THE ASTRAL FACTOR.

That score kicks off the film with dissonant strings punctuated by a wolf’s howl as an ominous narration from George Macready (writer and star Michael Macready’s dad) pontificates on the existence of vampires as Count Yorga’s coffin is transported from the old country to his California mansion by his Renfield-inspired assistant, the hulking Bruddah (Edward Walsh). From there, the audience moves along to a seance in a hip Los Angeles home. Too old to be hippies in 1970, the group could best be described as proto-yuppies Paul (Michael Murphy), Mike (Michael Macready), Donna (Donna Anders), Erica (Judith Lang), Peter (Mark Tapscott), and Judy (Sybil Scotford) They have gathered so that Donna can contact her late mother through the psychic abilities of the titular Count Yorga, who before her untimely death was her mother’s lover.

It’s revealed that Yorga insisted that Donna’s mother not be cremated so that he could add her to the undead harem that he keeps in the old-world dungeon of his thoroughly modern home. Quarry was never a fan of Vincent Price’s “over-egging the pudding” (note: both men penned cookbooks) and opted to play Count Yorga straight — albeit with a certain sarcastic wit. This isn’t the tragic, romantic vamp featured in so many gothic tales; Quarry’s take on the Count displayed both a dry sense of humor, a proto-Studio 54 sleaziness, and a mouth full of fangs. Yorga is simply looking to put together an undead harem that he can voyeuristically watch make love from the throne in his dungeon — and he does, in a sexy sequence probably leftover from the script’s original iteration. It’s easy to pick out where the money shots would have occurred, had YORGA been shot as a skin flick: A love scene in a van on Yorga’s estate, the girl-on-girl action in his dungeon, and what was probably intended as a masturbation scene when Erica is visited by the Count by night, a more explicitly erotic sequence inspired by a similar, more transgressive sequence in 1931’s DRACULA. 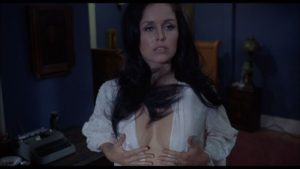 Transposing the vampire legend into modern-day Los Angeles was not without its hurdles for the writers. Even Van Helsing had a hard time convincing his peers — and the authorities — of supernatural goings-on in the 1800s, and that became increasingly difficult in the ‘70s and ‘80s. YORGA presents this notion up front, and with a meta-comic element. The first character to suggest that the Count may be a vampire is Dr. Jim Hayes (Roger Perry); when the good doctor (who’s in bed with an attractive, but daft young lady) calls the police to tell them they’re most likely dealing with a vampire, he’s laughed off the phone as the 47th nut talking about vampires. The sequence resembles a Bob Newhart/Benny Hill Halloween special. 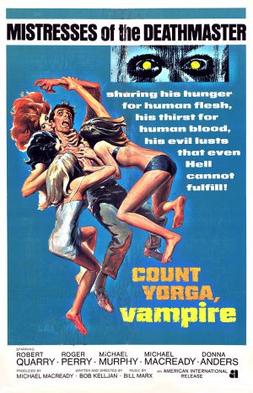 The film’s climax features our heroes storming Yorga’s home at dusk, having overslept despite their plan to attack during daylight hours. They take on Yorga and his harem of vampire brides, but just as it appears our modern-day Van Helsing has defeated evil once and for all, a final shock — predating CARRIE by several years — finds evil triumphing over good, in line with the nihilistic themes of the New Hollywood that would take over the film world throughout the ‘70s. 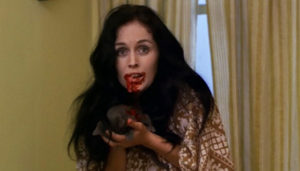 Lest one believes that the quest for the PG-13 rated horror film (read: more teenagers in the seats, and more money in studios’ pockets) is a new development, the filmmakers had to submit YORGA to the MPAA six times in order to receive a GP rating (equivalent to today’s PG). A memorable sequence in which Erica (Judy Lang), having been bitten by the count, begins her transformation by devouring her pet cat was all but removed from the film, but is now available in all of its uncut gory glory.

YORGA was a surprise hit for AIP in the summer of 1970, appealing to both audiences and critics. In addition to Siskel’s glowing review for the Chicago Tribune, Roger Greenspun of the New York Times called Quarry “the best chief vampire I have seen in years.” Kenneth Thompson of The Monthly Film Bulletin praised the acting and direction, comparing YORGA to NIGHT OF THE LIVING DEAD. The film would pave the way for AIP’s other popular modern-day bloodsucker, BLACULA (which repurposes footage of Yorga’s coffin making its way stateside) as well as 1973’s SCREAM BLACULA, SCREAM. Quarry would appear in another independent production, THE DEATHMASTER in 1973 which featured the actor as a vampire hippie guru modeled after Charles Manson.

Meanwhile, Hammer Productions, which all but cornered the vampire market throughout the ‘60s, found themselves playing catch-up. They transported Christopher Lee’s Count — and Peter Cushing’s Van Helsing — to swinging London, sinking his fangs into a modish group of attractive young people (including Caroline Munro) in DRACULA A.D, 1972. That film did not fare as well with critics, despite being a favorite of this writer.

The ‘80s saw a slew of modern-day vampire tales with Tony Scott’s THE HUNGER bringing them to New York’s goth scene, NEAR DARK to the Wild West, and FRIGHT NIGHT transporting the legend even closer to home—next door to a suburban teenage horror fan. Fifty years — and countless modern takes on vampire legends from comic books to television to film — it’s easy to overlook its influence, but COUNT YORGA, VAMPIRE remains an influential vampire flick that fans of the genre should sink their teeth into. 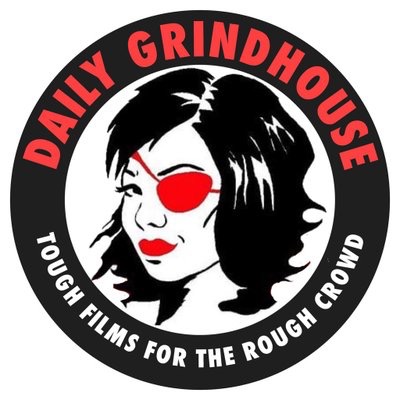