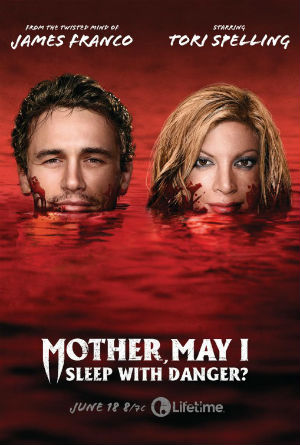 Seeing THE DISASTER ARTIST tonight, which reminds me of the last James Franco project I saw: MOTHER, MAY I SLEEP WITH DANGER? Here’s something I did last year, which was excerpted in a piece that ran on Broadly. Wanted to share it with you, as a seasonally-appropriate Christmas treat.

Maybe the most fascinating thing about the horror genre, to me, is that it comes wearing a mask – there’s what a horror story is about, and then there’s what it’s really about. A popular horror trope speaks volumes about its culture and its era; a person’s favorite horror movie trope speaks volumes about their own inner lives. For example: To my eyes, the werewolf legend has always been about rage, either restrained or unleashed. So the fact that I love werewolves the best among all horror villains is probably one best left to the professionals. The fact that – unscientifically speaking – vampires are by far the most popular and enduring horror creatures in film and literature, with only ghosts and zombies being anywhere close, is something that says a whole lot about human beings in general. And I wouldn’t be the first or the last to point out that the vampire myth is an allegory for sex.

I’ll be honest – I wasn’t awarethat the lesbian vampire trope dates back as far as it does. There’s always more to learn! It’s definitely a huge part of exploitation-movie history, with the genre really cutting loose in the late 1960s and even moreso throughout the 1970s. But come to think of it, it’s always been there, at the very least in implications, most evidently in the characters of the Brides Of Dracula, seductive figures who appeared in Bram Stoker’s landmark novel and in countless film adaptations since, maybe most famously in the Hammer era. Even if the Brides’ sensual activities didn’t directly extend to each other, there was always the very clear sense, even in the most uptight iterations, that it wasn’t too far away from being possible.

The reason for all of it is that the vampire’s approach to its victims is uniquely intimate – a demon will invade the soul and a psycho-killer will hack up the body, but the vampire has to get in close. The vampire drinks blood from the neck or wrists, and it’s an act of transference. The vampire can turn its victims into new vampires; a vampire doesn’t necessarily destroy a person, like a zombie does, but it makes a person like itself. It corrupts. After a zombie attacks, there’s nothing left. After a vampire attacks, something new is created. The new vampire feels liberated, even if the humans left behind are horrified to witness the transformation.

My guess as to why lesbian vampires are so specifically enduring has a lot to do with how the female body has been and continues to be vastly more sexualized than the male body in pretty much every culture in the world, ever. There have been reversals of the trope over the years, as far as gay male vampires go (either in subtext or on the surface), but those instances are comparatively fewer. More often, horror enthusiasts want to look at sexy-lady vampires, and if one Elvira is great, how much better would it be to see two? As a straight man, I can’t deny having an understanding of the impulse, although as someone who’s enthusiastic about cultural equality, I’m always looking to find variations on the theme.

Heterosexual pairings of vampire and human victim remain the most common by far. It’s possible there’s some wish fulfillment happening for straight male horror fans – Count Dracula as James Bond, in other words – and it’s also likely that straight males are more amenable to imagined lesbian scenarios than to gay ones. But as always, the more interesting examples of a genre manage to challenge and upend audience expectations and audience desires.

For me, the movie that comes most readily to mind is 1983’s THE HUNGER, which stars Susan Sarandon – not for nothing, previously the star of THE ROCKY HORROR PICTURE SHOW – and the historically hyper-sexualized tandem of Catherine Deneuve and David Bowie. Casting carries weight, and it means something when a film pairs Catherine Deneuve, one of cinema’s most legendary beauties, with David Bowie, an unconventional and pioneering sexual icon. Entire books have been written on the matter of David Bowie’s sexual orientation, and its impact on, and interpretation by, the culture of the 1960s and 1970s. So it means something when Bowie and Deneuve play a vampire couple, lovers for centuries, and it means something else when the Bowie vampire begins to age rapidly, and when the Deneuve vampire turns her attention to Susan Sarandon. And it definitely means something that this movie happened in the early years of the 1980s. After the 1960s, after the 1970s. In another movie, it’s easy to imagine Bowie could have played Count Dracula – here, Catherine Deneuve is the alpha figure, and Bowie’s character’s importance to the story is ultimately supplanted by Susan Sarandon’s character.

It’s presented as a sort of evolution, in the course of the story, but socio-politically speaking, in the context of the era, it has its own electric charge. A viewer can easily experience THE HUNGER for the superficial pleasures of the physical beauty of David Bowie and Catherine Deneuve and Susan Sarandon, but the power of the accumulated star personas and their uncommon intersection is what makes the movie feel as unique as it does. I’m not even arguing the movie runs all that deep, necessarily, but as a piece of pop art, it remains memorable and intriguing, precisely because of how it recasts the genre standards.

THE HUNGER screens in 35mm today at Metrograph in New York City.