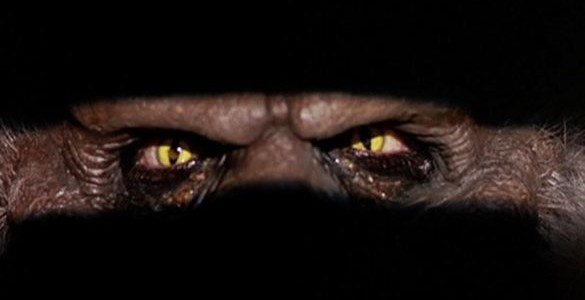 It seems ridiculous to write any sort of plot explanation or introduction to CREEPSHOW. If you are a reader of this site, you already know it as one of the all-time great horror anthology films and the best of the collaborations between Stephen King and the late, great George A. Romero. With that in mind, I’m just going to jump into the review of the new collector’s edition Blu-ray. 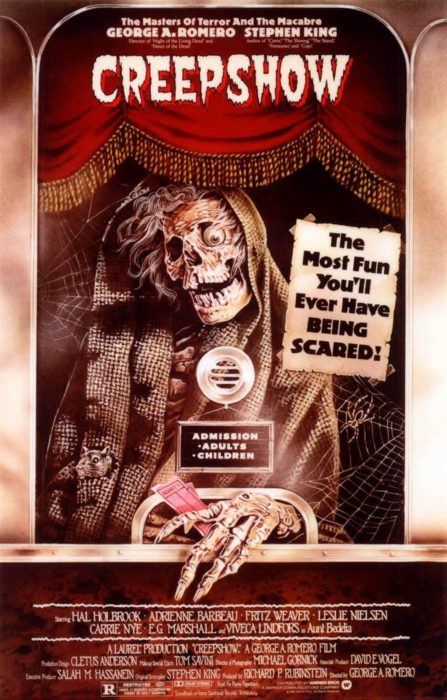 I first saw CREEPSHOW at some point in the early ’90s. At the time, I considered it one of the few masterpieces of the horror anthology genre. I loved the darkly funny EC-style morality tale feel and the way it ramped up with each story, ending with the one-two punch of the best installments of THE CRATE and THEY’RE CREEPING UP ON YOU. I dug the cast of veteran character actors and old school movie stars mixed with relative newcomers who were on the verge of becoming bigger stars than I am sure even they expected. If I had a criticism, it was that THE LONESOME DEATH OF JORDY VERRILL felt a little out of place with an unnecessarily over-the-top Stephen King performance. 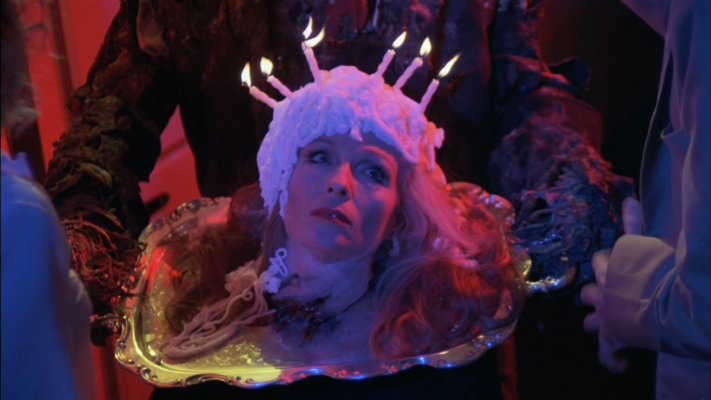 Over the years, I have watched CREEPSHOW probably around ten times. I have always been struck by how little my opinion of the film has changed. I’m a different person now than I was during that first viewing, yet even with changed tastes, the film maintained the same high level of entertainment value despite my increasingly cynical worldview. I suppose that is what is meant when a film is said to have “aged well.” So it is no surprise that this packed Blu-ray from Scream Factory was one of my most anticipated releases of the year. 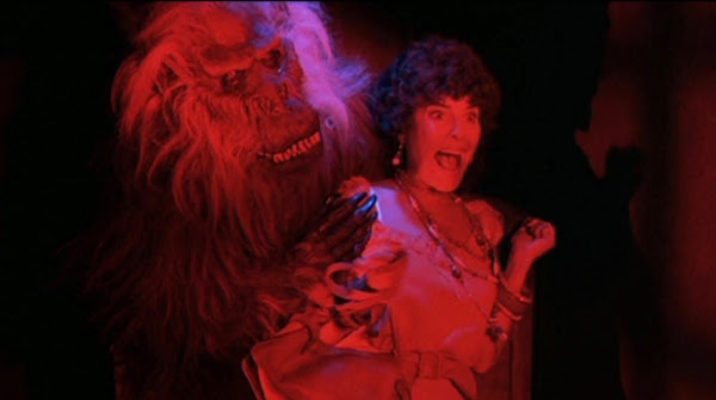 I am surprised to report that this viewing actually changed my opinion slightly. I can now see the merits of including the JORDY VERRILL segment. Thematically, it still feels out of place amongst the other segments, but King’s performance, while over-the-top, is consistently pitched to the sort of cartoonish level that I never fully appreciated before. It also helps that the new 4K scan looks amazing, really highlighting the terrific production design of the Verrill home and the impressive special effects of the spreading green “meteor shit” that eventually takes over Jordy. 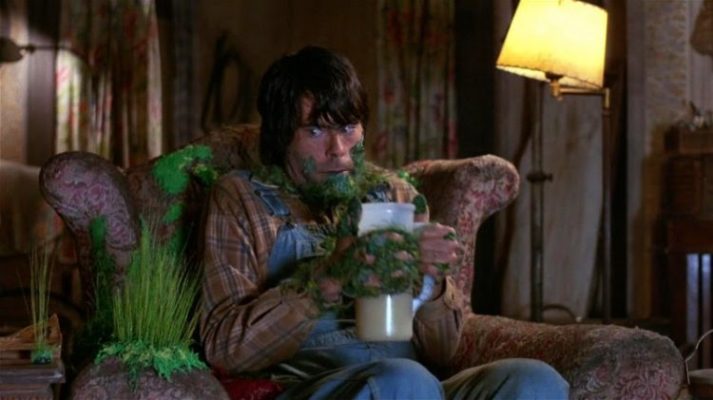 While the 4K scan really highlights the impressive work by Romero’s longtime cinematographer Michael Gornick (especially the nifty comic book panel backgrounds that were all achieved via lighting tricks), the D.P. could not help himself in doing a new color correction on the image that includes some attempts to slowly transition from normally lit shots to the bold primary colors when something horrific happens. In an interview with Gornick on the disc, he talks quite a bit about always being dissatisfied with the abrupt shifts in the look of the film and how he tried to rectify that with this new color correction. While the rest of the film is crisp and beautiful, the attempts by Gornick to achieve those transitions are unnecessary and a little distracting. 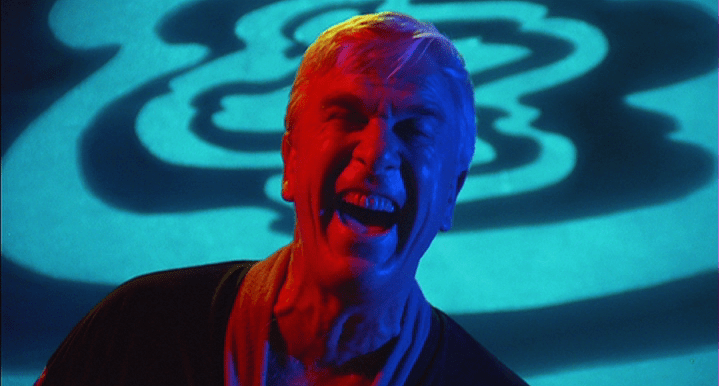 Given the film’s prominence in popular horror of the latter-half of the twentieth century, Scream Factory has given CREEPSHOW a legitimately packed special edition. In addition to an entertaining older commentary featuring Romero and special effects maestro/actor Tom Savini moderated by Michael Felsher, there are two new commentaries. One features Gornick and the other has first assistant director/composer John Harrison and construction coordinator Ed Fountain. Of the two, Harrison and Fountain are the far more entertaining storytellers.

In addition to the commentaries, the disc comes with a lengthy essay by longtime Fangoria writer/editor Michael Gingold. There is also what feels like approximately a thousand hours of new interviews with cast members, costume designers, sound mixers, animators, and a collector of CREEPSHOW mementos (including one of the crates from THE CRATE and the makeup bust of E.G. Marshall used for the grisly climax of THEY’RE CREEPING UP ON YOU). 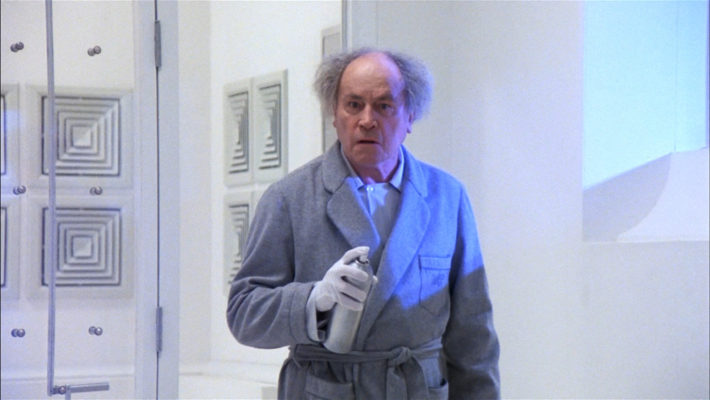 While all of the new interviews are interesting and deliver fun and informative tidbits, the best of these is a roundtable talk hosted by Felsher with Tom Atkins, Savini, Marty Schiff, and John Amplas. All four men had a long history working with Romero and contributed to the film in ways both large and small. Thankfully, they are also great storytellers. Atkins recalls how concerned King was that his son Joe (playing the little boy in the wrap around segment) would be hurt when Atkins’ abusive father character is supposed to slap him. Savini lets slip that thousands of the roaches in the final segment escaped and that the building where the set was built still has a terrible roach problem over thirty years later. Like most of the interview segments, this one eventually turns into a tribute to Romero as all involved remember him fondly.

It is hard to imagine a more comprehensive package than what CREEPSHOW has received here. With the notable exception of King, all of the major collaborators who are still alive are present and more than happy to talk about the film and their time working with a legend like Romero. It is a pleasant turn that the film is not only given its best home video presentation to date, but that everyone who gave of their time to participate treated it as an opportunity to remember and honor one of the greatest of American independent filmmakers. 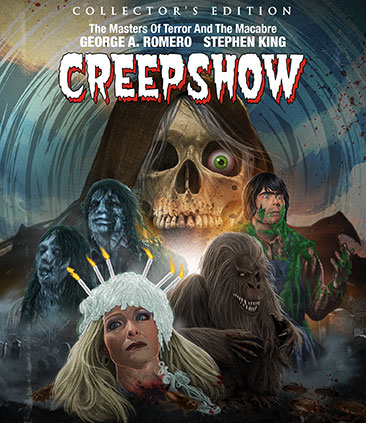