Deadline is reporting The Weinstein Company is gung-ho on a sequel to CROUCHING TIGER, HIDDEN DRADON. There is a script by John Fusco, which will be produced by Harvey Weinstein and (if they can snag him) directed by Ronny Yu. Before we jump into the nuts and bolts of the film and heavily quote the Deadline article thus sparing us the laborious task of hunting down the information for ourselves, let’s talk Ronny Yu. Bad fucking choice. I dig his films, but none of them have the weight for this kind of material. The story these films are based on are these hyper-realities that have real human depth, they’re touching, brave, and feel like classic parables. The director of BRIDE OF CHUCKY probably isn’t going to be able to make that reach. Granted, there is a case for Ronny Yu, he did make FEARLESS which was good in addition to a few others, but his career has been littered with mediocrity and I just don’t see him being the guy to pull this off. But there you have it; the man the Weinstein’s want is usually the man the Weinstein’s get. 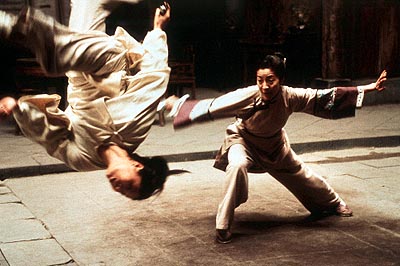 The new film is is based on Silver Vase, Iron Knight. The fifth book in the Crane-Iron Pentalogy by Wang Du Lu. Crouching Tiger was the fourth novel in the series. According to Deadline “the sequel continues to revolve around Yu Shu Lien, the character played in the original by Michelle Yeoh. It’s not immediately clear yet which actors will reprise, but some likely will. “This introduces a new generation of star-crossed lovers, and a new series of antagonists in a battle of good and evil. It has a Knights Errant quality. There is an alternate universe in the books, a martial forest that exists alongside the real world, full of wandering sword fighters, medicine men, defrocked priests, poets, sorcerers and Shaolin renegades. It’s so vast and rich, and I found characters from the second and third books in the series to create a most interesting stew while being as true to the source material as I could be.”

Casting will get moving when the Yu is locked up. Should be interesting to see this one take shape. We are genuinely excited to see where this goes, CROUCHING TIGER was epic and we’d dig going back to that world, but they also have a high bar to meet and have to make sure they treat the history of the soon to be franchise appropriately.