THE THETA GIRL is a remarkably inventive, psychedelically captivating, micro-budget mind-banger presently mushrooming into the consciousness of indie fright fare fans, particularly those with a bent toward bravura brain blasting derring-do.

The “theta” of the title is a hallucinatory drug (named for the Greek symbol for death) that may launch users into an elevated state of being — and more. The “girl” is Gayce (Victoria Elizabeth Donofrio), peddler of the aforementioned product — and also, of course, so much more.

Now consider that director Chris Bickel managed to pull off all that and invoke iconic art and grindhouse wizards on the order of Herschell Gordon Lewis and Alejandro Jodorowsky on a budget of $14,000!

Bickel himself describes THE THETA GIRL as an “existensploitation film.” That’s perfect. He talked with DAILY GRINDHOUSE for a bit about the movie, as well as what he’s up to next. Open your third eye and dive in.

Daily Grindhouse: How did THE THETA GIRL come to be — from your first conception of it until the moment you realized you were going to actually make the movie?

Chris Bickel: I had wanted to make a film since college. I had actually started to make a movie right out of school and I ended up getting all of my gear stolen along with all the footage I had shot.

This was in the 90s. It was so devastating that I actually got very depressed and “deferred the dream.” But it had always been in the back of my head that “one day” I’d make a film.

I became friends with a guy named David Axe who was a journalist and aspiring screenwriter. He had experienced some frustration with getting some scripts produced, and one night after drinking we both decided that we could help each other out — he could get a script produced and I could make a film.

So then we came up with a list — informed to a great degree by my obsession with low budget exploitation — of items that should go into a cheaply made film in order to, sort of, get the most bang for our buck.

Primarily, the thing I had learned from movies like ILSA, SHE WOLF OF THE SS was to have some form of sex or violence or extreme weirdness invade the frame every five minutes. From there, David wrote the script for THE THETA GIRL, and I loved it. So we went into pre-production right away. 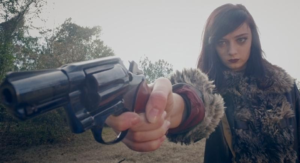 DG: Take us through the process of making the film. What was the budget? How did you find the actors?

CB: Having never made a film before, and therefore having no reel to demonstrate proof for the people donating money, I decided we should make a short film to put on the Indiegogo page.

So we made a fake movie trailer called TEENAGE CALIGULA and that went a bit viral and helped raise awareness — and money for the project.

All of the actors were locals that we found from Facebook posts and friends-of-friends. We got really lucky in that we found some very talented people. Finding Victoria was a coup.

Our budget for THE THETA GIRL ended up being $14,000. To put that into perspective, we could have made THE THETA GIRL 3,571 times for what it cost to make THE EMOJI MOVIE once!

DG: There’s a great intermingling of styles in THE THETA GIRL, and a palpable musical sensibility courses through it. What art and artists in various media influenced its creation and production?

CB: I’m a big fan of Jack Hill and I think he ends up in what I do a bit. I was trying to channel Penelope Spheeris in the club scenes. My sound design aesthetic is very informed by Lynch, but also musicians like Nurse With Wound.

Most of the soundtrack elements are very ’80s, very John Carpenter — and it killed me a bit that Stranger Things blew up as we were making the film, haha! I thought we were doing something really original with the 80s-vibe synth score!

The look of the film is very ’80s-slasher-inspired, though I didn’t want to make something that looked like a Grindhouse-ripoff “throwback.” I did try to color everything to look like it was shot on 16mm in 1982.

DG: THE THETA GIRL is trippy and hallucinogenic. What part did psychedelic art, culture, and even substances play in the movie’s creation?

CB: A large part. Theta, the fake drug, is obviously informed by LSD, DMT, and maybe to a lesser extent MDMA. It’s supposed to be an amalgamation that has the added effect of giving its user a shared common experience. I’m not sure that I should speak for David, but it is possible that some research materials may have been involved in the creation of the story.

DG: What other contemporary independent filmmakers inspire you?

CB: As far as more popular (bigger than indie) filmmakers go, Aronofsky is big for me right now just because I loved MOTHER! so much. I think it’s the most important piece of cinema of the past ten years.

Though, overall, I think his movies are too goofball for my taste, I really admire Edgar Wright’s craftsmanship. The shots and editing in BABY DRIVER made me want to set THE THETA GIRL on fire and never pick up a camera again. GET OUT was an amazing film and I can’t wait to see what Peele does next. It’s a really good time for horror films right now.

The stuff that really inspires me, though, is the ultra-low-budget stuff. I probably wouldn’t even be making films if it weren’t for Tommy Faircloth (DOLLFACE, FAMILY POSSESSIONS) showing me that it could be done locally for next-to-no-budget. Jonathan Straiton (NIGHT OF SOMETHING STRANGE) has also been very inspiring to me.

Anything that can be done cheap and can be compelling and can push some boundaries… I’m into it. Most of my real influences, though, aren’t contemporary–classic horror and exploitation is part of my steady diet… particularly the years 1973-1983… that’s the greatest decade of cinema. 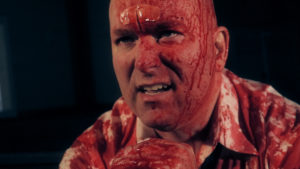 DG: What are your plans going forward with THE THETA GIRL?

CB: We’re doing the festival circuit right now. Doing very well with that. The response has been extremely positive. We are on the precipice of a distribution deal that I’m trying not to jinx by talking about it. We don’t have contracts signed yet, but things are looking really good.

My whole thing is that I made a movie — my first — to learn how to make a movie. It turned out much better than I thought it could have, given our budget and inexperience. I just want eyeballs on it. I want people to be entertained by it, and if that can happen, then maybe I can hustle a little bit more money to make an even better one.

DG: What are you doing next?

CB: I’m doing a feature-length revenge thriller called SISTER VENGEANCE. The story is completed and the script is about half-finished.

There’s a “movie within a movie” in SISTER VENGEANCE–one of the characters goes on a date to the theater and has a conversation with the film onscreen, which breaks the fourth wall inside the movie. 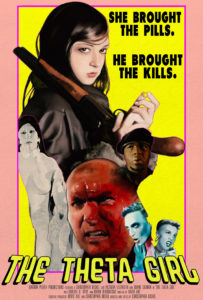