Home  ⁄  The Wire  ⁄  [THE DAILY GRINDHOUSE INTERVIEW] Kika Magalhaes, STAR OF ‘THE EYES OF MY MOTHER’

At its core, THE EYES OF MY MOTHER is a film about a woman longing to love and to be love in returned, but what director Nicolas Pesce ultimately accomplishes is the quiet horror of how something so simplistic and pure can be warped through loneliness. The film follows a young woman, Francisca, whose early life is shattered by the tragic and unexpected death of her mother. Francisca lives in a secluded farmhouse with her father, a cold and distant man who only serves to deepen Francisca’s desire for love, which leads her down an increasingly dark and bloody path. It’s a stunning debut for Pesce, whose use of stark monochrome allows him to make masterful use of both darkness and shadow, casting a blanket of tension and dread over the entire story. 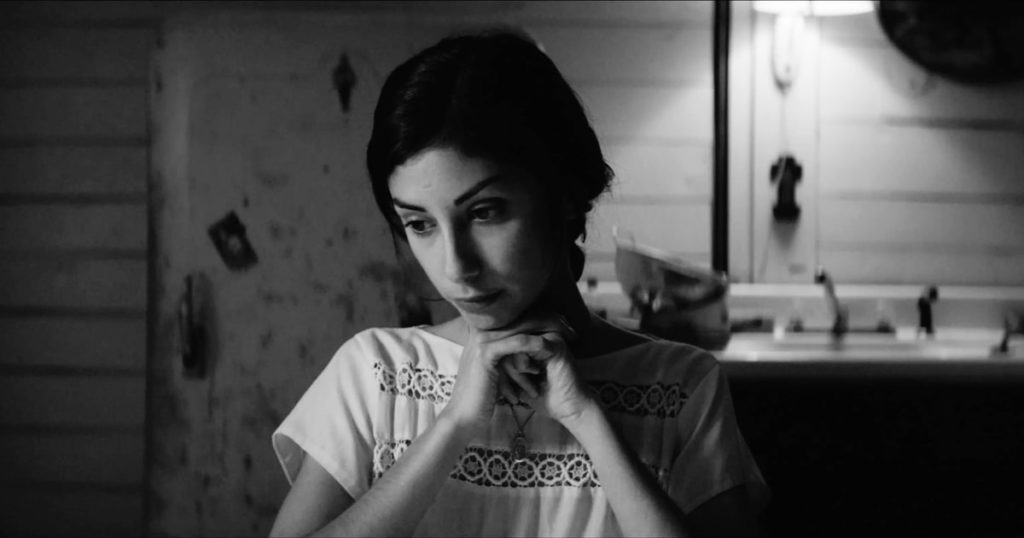 Much of the film’s strength comes from Kika Magalhaes’ quiet but intoxicating portrayal of the adult Francisca, a character Magalhaes was able to help develop even before a script had been written. “I got involved in this project at such an early stage that it was just an idea in the beginning. We collaborated a lot, probably for a year and a half before we actually even shot the movie. Nick would call me and we would meet up and talk for hours about Francisca and the character.” Because of this, Magalhaes was able to inject a sense of authenticity into Francisca by weaving in a bit of her own background. “I am originally from Portugal so when Nick said that he wanted to bring my own heritage into the movie, I thought that was amazing. There are a few little details that the general audience may not catch but Portuguese people definitely will.”

There is an eerie feeling to Francisca’s movements, she is observant of others with a detached, almost alien fascination. Her mannerisms are calculated and economical, she sometimes gliding through rooms with her hands held awkwardly in front of her body. In one scene, as Francisca eats a quiet supper alone, sheseems almost fascinated and surprised by the food on her fork. For Magalhaes, Francisca’s body language was something unplanned. “I didn’t plan those mannerisms, it just really happened organically. I knew that Nick wanted a still performance, a kind of emotionless and quiet performance but the way she was and the way she would position her hands and stuff, I didn’t really plan for that stuff to happen. I guess it really happened in a really organic way which was really interesting to see that coming out for me without having that planned.”

The depth behind Francisca anchors the audience in a story that is both tragic and disturbing. The first part of the film deals with the death of Francisca’s mother at the hands of a seemingly polite stranger named Charlie, who awkwardly charms his way into the house and holds both women at gunpoint before butchering Francisca’s mother in the bathtub while the child watches. When Francisca’s father comes home to the tragedy, he beats the man unconscious and drags him out to the family barn, where him leaves him chained up. Later on, it is up to Francisca to quiet the man, who is calling her incessantly. Recalling the anatomy lessons given to her by her deceased mother, who was a surgeon in Portugal, Franscica removes Charlie’s eyes and cuts out his vocal chords. Now silent and blind, the captive can become her own macabre pet, her own source of love and one that extends into her adulthood, which forms the remainder of the film. “I think that she was keeping Charlie there because he was the only option at the moment that she had,” Magalhaes said. “She did love him, that would definitely be the best part of her day, feeding him and taking care of him.” 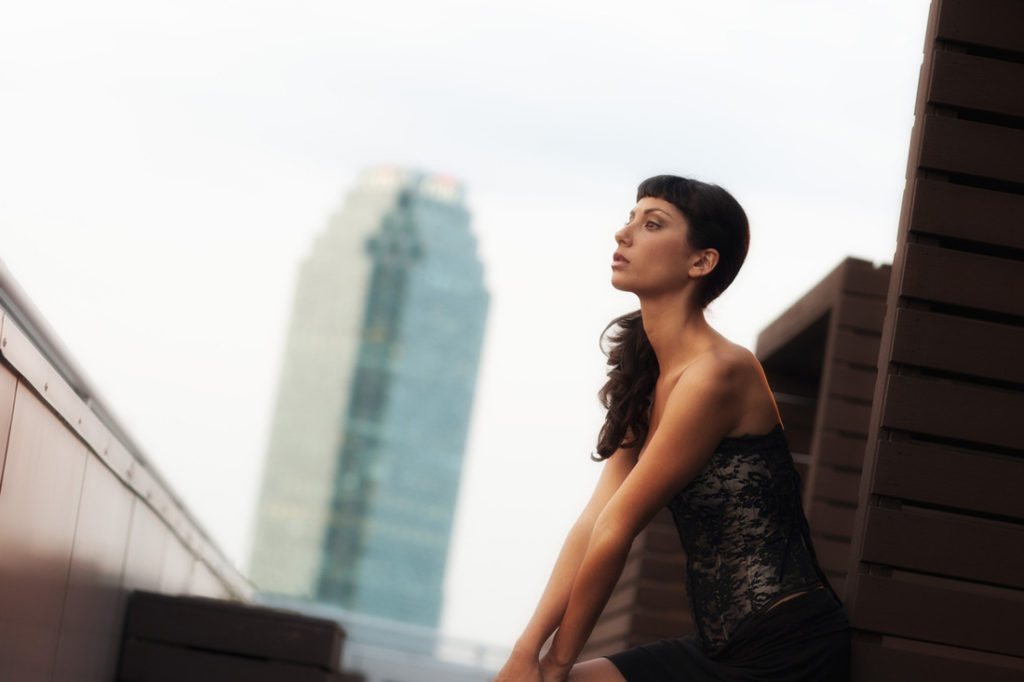 But there’s more to Charlie’s captivity than this, as Magalhaes teases a potentially sinister reason behind Francisca’s dark childhood and her father’s motives in keeping the man locked up.“He could have just called the cops, his wife was murdered right there and the thing is why didn’t he call the cops? There is a reason why he kept that guy in the barn and why he didn’t call the cops and all I’m going to say is maybe that was not her real dad.” This subtle ambiguity weaves itself throughout the film, leaving the audience to color in the unspoken and disturbing details. Later in the film, when Francisca steps out of her comfort zone and picks up a Japanese student from a local bar, it is unclear whether she is after sex, a friend or both. The only certainty is that it won’t end well. After spooking the student out with her frank talk about death, Francisca kills the girl to prevent her from leaving. “That was an accident, it wasn’t something that she planned she just wanted that girl more than anything to be her friend or her lover. Francisca couldn’t bear to see her leave.”

The last act of the film hints against the cyclical nature of Francisca’s life as she kidnaps an infant and keeps the boy’s mother captive in the barn, thus restoring the balance in her life by having someone to love in her home and a secret to tend to out back. But while Francisca showers Antonio with love, she is also subjecting the boy to the same stifling isolation and loneliness that warped her into a killer. “Antonio was basically having the same childhood that she had,” Magalhaes said.“The movie goes in circles because Francisca was not the real mother of Antonio and she was keeping him trapped in that house. He never had a friend just like she didn’t growing up.” In the end, Francisca’s blind love for Antonio leads to her demise, as her past finally catches up with her.

The shocking end to Francisca’s life concludes a bleak tale, but one masterfully woven by Pesce’s screenplay and direction and turned compelling by Magalhaes’ enigmatic but alluring Francisca. As the year grinds to a close, THE EYES OF MY MOTHER is an early Advent treasure and a film that deserves to find itself on more than one Best Of 2016 lists. 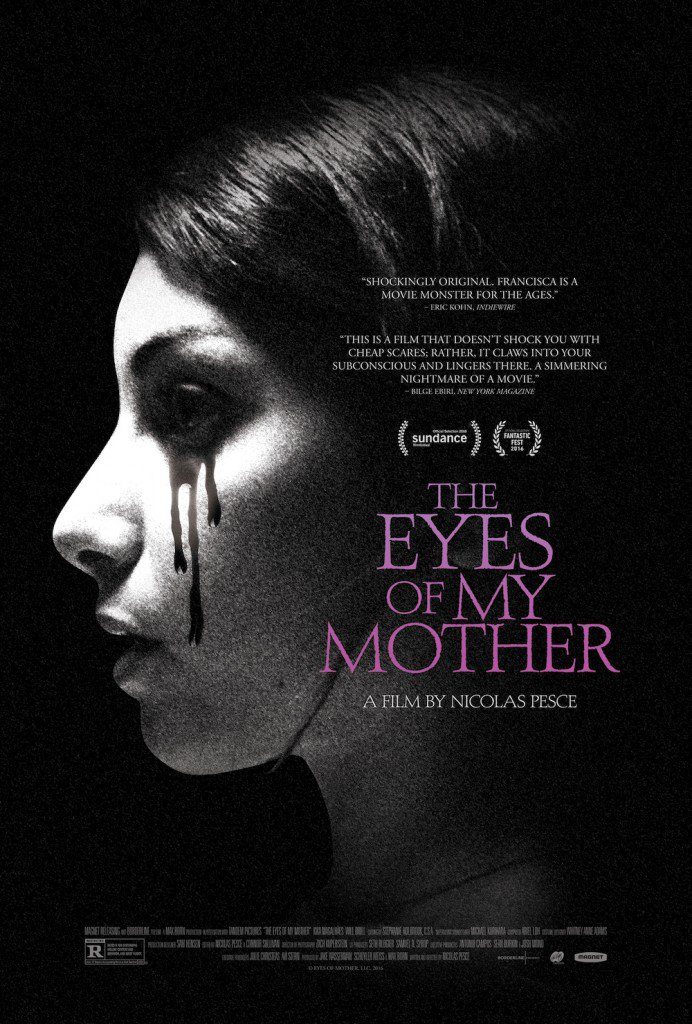 THE EYES OF MY MOTHER is now in theaters and available on demand, on Amazon Video and iTunes. Please check out our review of the film!