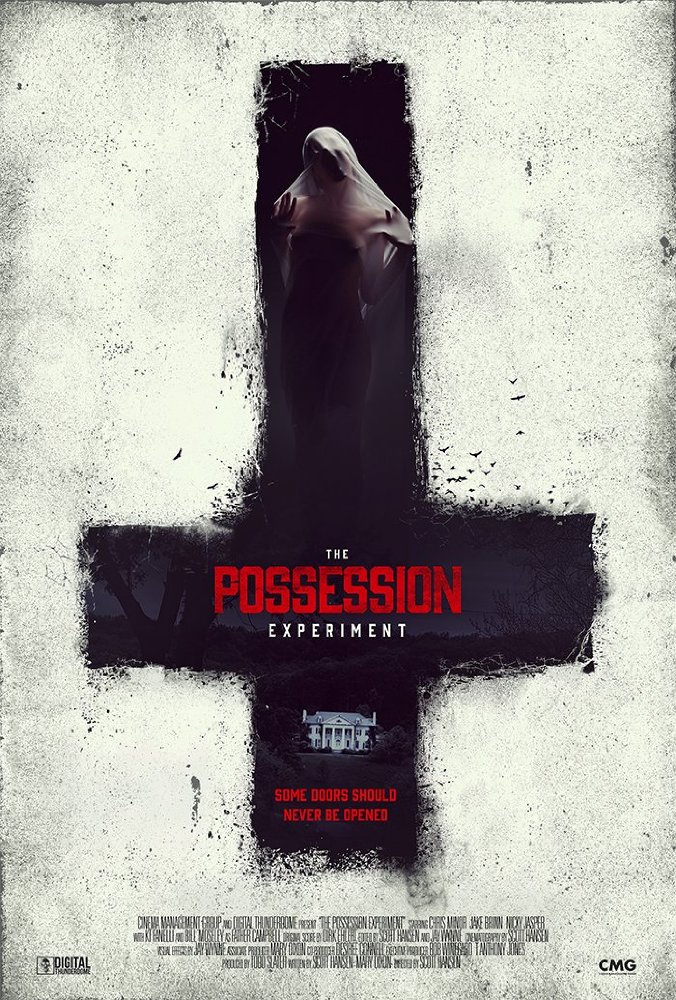 Despite how tired and common possession/haunted house/religious horror movies have become, both independent and major Hollywood movie studios keep churning out more more fodder for the dollar bin at Walmart. There really isn’t any new angle that can be taken with this particular sub-genre. You could always do like THE CONJURING did, and throw every cliche at the screen and see what sticks. That’s pretty close to what THE POSSESSION EXPERIMENT did. The only big difference is that THE POSSESSION EXPERIMENT  is a much more relevant film, taking place in modern times. Add in a bit of dark humor and you got yourself a real winner!
THE POSSESSION EXPERIMENT wastes no time getting to the action. In a flashback scene that looks like something reminiscent to EVIL DEAD (2013), the blood, gore, and profanity are flying. Great to see cult actor Bill Moseley doing a cameo as Father Mark Campbell, the priest conducting the exorcism. The color scheme of red, gray, orange, black has a desolate sense of dread, and the mostly practical special effects bring to mind classic films such as BEYOND THE DOOR.
Flash forward to modern times, and we are introduced to our main character Brandon Jensen (Chris Minor). Brandon is studying theology and decides for his final project he is going to focus on Exorcism. Brandon is a cool kind of nerd that most horror fans can identify with. Without many friends, Brandon winds up teaming up with a stoner, Clay Harper (Jake Brinn) for their final project. I don’t remember much from my college years, but I do remember that you don’t want to team up with a friggin’ stoner. Ugh! I will have to say that the characters seem organic and their relationships realistic.
To document the progress of their project, Brandon decides to use an online blog. As much as I can’t stand found-footage movies, I think the point-of-view footage combined with traditional film making, added to the authenticity to THE POSSESSION EXPERIMENT. During their investigation, Brandon wants to explore a house where an exorcism took place, the same one from the opening sequence of the film, and Clay warns him not to. A stoner has a good idea in a horror film? Damn it, listen to him! Breaking into the house where the exorcism took place brought to mind similar a scene in  AMERICAN HORROR STORY: ASYLUM. Of course behind some loose boards in the wall with an ancient symbol on them, these dumb ass kids find a spirit board. It’s like they stepped off the set of the 1980s classic WITCHBOARD.
Brandon goes from having one bad idea to another. Now he wants to voluntarily get possessed, similar to voluntarily dying in FLATLINERS. Listen to your professor, this is not a good idea. Damn kids know everything. So it’s back to the haunted house, with the Ouija board.  The electricity goes on and off by itself, a bunch of weird shit happens, and as far as we can tell…Brandon isn’t possessed.
Brandon starts a demonic downward spiral, and many familial twists are revealed. The tension is great. I really appreciated the use of mainly practical gore effects, it’s a lot of fun.
The third act is the weakest. I could have done without the music video style editing. That crap drives me bananas. Rob Zombie has that covered, do your own thing. A little creativity goes a long way. Other than that, there is some great EVILSPEAK/DEMONS techno-fear going on, and the finale is a great gore-filled pay off!
I really thought I was burnt out on this sub-genre, but THE POSSESSION EXPERIMENT proved me wrong. This movie has carnage, action, and even a few laughs. I would say that THE POSSESSION EXPERIMENT is smart and original enough, but yet still pay respect to similar films that came before it, but not to the point where it’s a parody or even homage. If you want a gritty exorcism film that seems current then check out THE POSSESSION EXPERIMENT.
RECOMMENDED!