The dinner party has become a staple of low budget horror and sci-fi films in the last few years. Everything from COHERENCE to THE INVITATION has used this most banal of settings as an excuse to trap a small group of people in one location. And why not? When you set up a situation where a group of people are supposed to be on their best behavior, but are then pushed to expose the worst of themselves by whatever evil plot twist they encounter, you have ready-made character arcs. The micro-budgeted NEVER OPEN THE DOOR takes this set up one step further by making the party a Thanksgiving dinner (taking advantage of already heightened holiday stress) and placing its group of characters in an isolated vacation home that none of them remember renting. 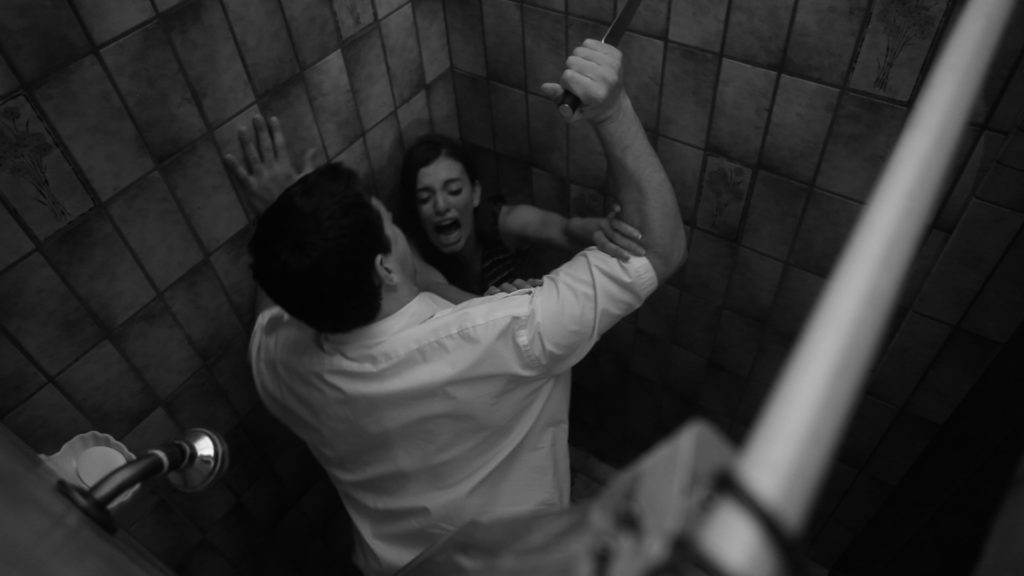 After a disorienting opening that finds the camera operating as the point of view of someone running through the woods from an unseen pursuer, co-writer/director Vito Trabucco focuses on introducing his six main characters. There is Tess (Jessica Sonneborn), a veterinarian who takes an excessive amount of teasing from her friend Terrance (George Troester) about her much older boyfriend. Terrance is ill-defined as anything other than a truly obnoxious jerk who nearly pulls his dick out at dinner and insinuates that Tess is only dating a man twice her age because she is actually gay. Luke (Mike Wood) is a bit of an overbearing jerk who is running for city council (it is implied that he may have ambitions that stretch beyond this introduction to politics). Maria (Deborah Venegas) is married to Luke and announces her pregnancy at the dinner table. Across the table from Maria are Isaac (Matthew Aidan) and Angel (Kristina Page), a young couple who are in disagreement about how far along they are in their wedding plans. Not surprisingly, Maria’s impending motherhood puts even more pressure on Isaac to hurry along with plans of settling down.

It does not take long to realize that the women in the film are used to putting up with some boorish behavior from these men. Despite dialogue suggesting that they have been friends since elementary school, Terrance treats Tess like absolute crap. His “teasing” quickly crosses the line into something that resembles a drunk pouring out a lifetime of resentments as he belittles her career, offers to show her his penis, and then makes his crass remarks about her sexuality. Luke is quick to jump on board with Terrance’s crude behavior, encouraging the conversation by wondering why Terrance has been trapped in Tess’ friend zone for so long. Maria can only roll her eyes in embarrassment at how Terrance brings out the worst in her husband. Isaac comes off the best of any of the men, but he is still very inconsiderate of Angel’s feelings when she says that their marriage will happen “soon” and he corrects her with, “soon-ish.”

As far as character introductions go, the film is swift and brutal. It is a dangerous thing for a film to make the audience hate half the characters only a few minutes into the film, but it is effective. This efficiency is important since NEVER OPEN THE DOOR only runs just over an hour.

Once the initial arguing and barely veiled contempt is out of the way, the film takes off like a bottle rocket. No sooner do the characters establish that none of them actually rented the vacation home in which they are staying (all assuming someone else in the group did) before there is a knock at the door. Not expecting anyone, the group is hesitant to answer until Tess is unable to ignore it. When she opens the door, an older man (Steven Richards), bleeding from a stomach wound, collapses into the entryway, spitting blood on Tess as he does so. 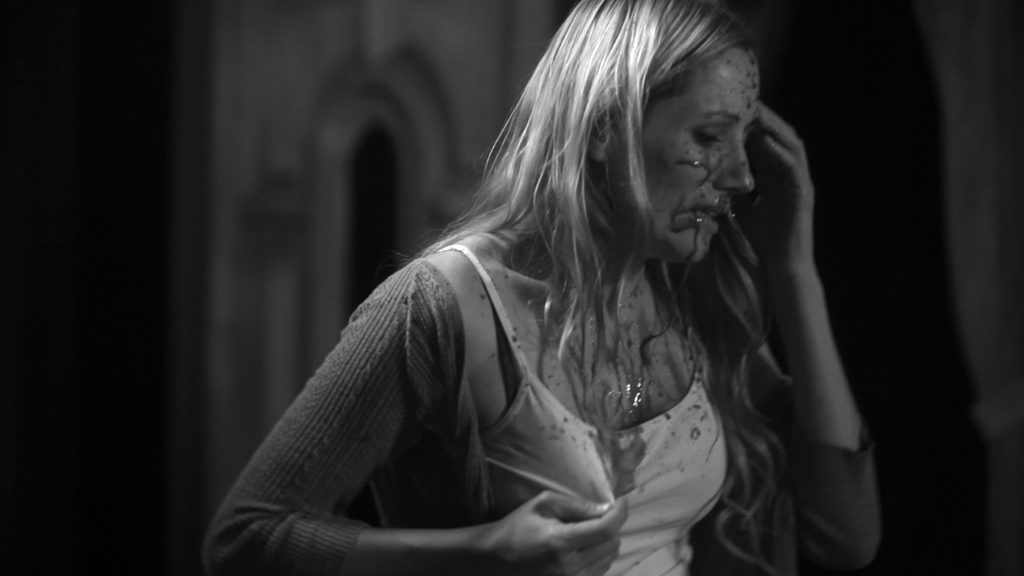 The expected panic ensues as Tess freaks out, another person pounds on the door, and the stranger points at Terrance and says with his dying breath, “Never open the door.” How much do you want to bet the characters fail to heed this advice all the way to the end of the film?

Things quickly go from bad to worse as Tess starts to behave oddly, veering from distant to aggressive at the drop of a hat. Attempts to call 911 only succeed in ringing the phone of another character. That is the perfect time for the lights to go out and come back on, revealing one of the characters has disappeared before they reappear in a way that is impossible. From there, events only get weirder and bloodier. 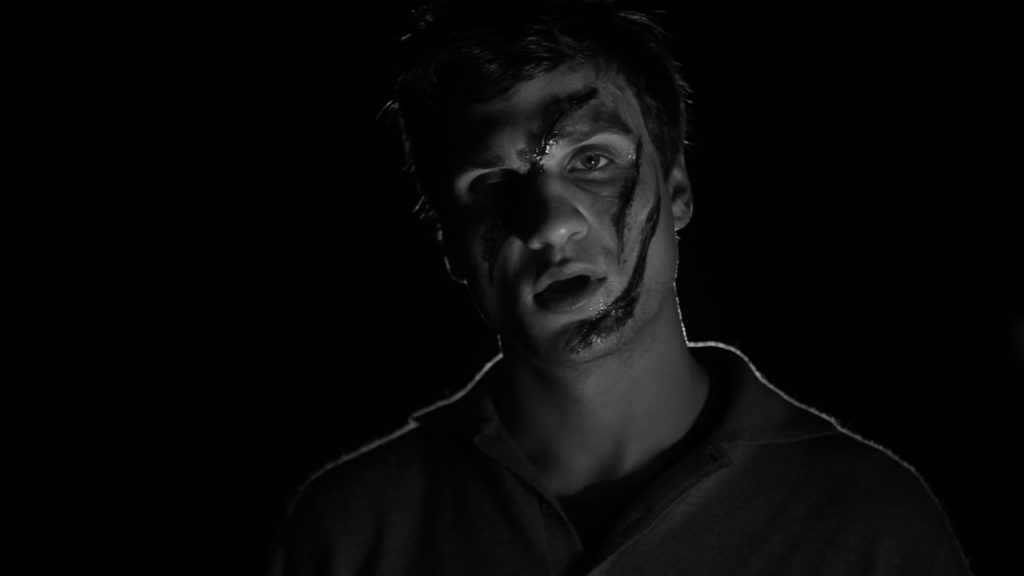 NEVER OPEN THE DOOR does fall victim to some of the usual traps at this budget level. With the exception of Sonneborn and Page, the acting is uneven, with most of the cast turned up to eleven from almost the start. The black and white cinematography and editing are fine, but lack ambition. But where the film succeeds is at the script level. It is a clever plot set up that teases a ton of different possibilities for the situation the group finds themselves in, and wisely, avoids answering most of the questions it raises.

Trabucco also is smart enough to rely heavily on Carlos Vivas’ score. It is unusual to hear such a robust piece of composing for this kind of film, and it is a welcome change of pace from the usual ambient synth scores that have become the norm for similar micro-budgeted films.

I can see how some people might be annoyed by the film and the way it never actually explains what has caused this bizarre scenario, but I enjoyed the retro Twilight Zone feel in the set up before it turns into a spin on the cabin in the woods genre. Sure, some of the twists feel like weirdness for weirdness sake, but NEVER OPEN THE DOOR cannot be faulted for being boring or over-staying its welcome. It has a cynical heart, and is not afraid to punish both its likable and unlikable characters with equal gusto, yet somehow still remains fun. I can put up with any rough-around-the-edges issues for a low-budget film if it entertains me, and NEVER OPEN THE DOOR passed that test with ease.

NEVER OPEN THE DOOR will be released on Google Play and Amazon Instant Video on December 6th and will hit Blu-Ray and DVD on the same day.