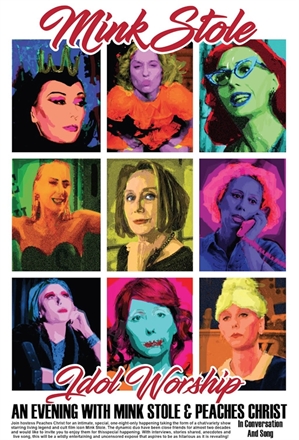 Chicago is in for a major treat! On Wednesday, April 18th, drag super-star and horror movie director Peaches Christ, along with cult icon and character actress extraordinaire Mink Stole, will be bringing their two-woman show IDOL WORSHIP to Mary’s Attic (5400 N. Clark St.). I don’t think I can properly express how excited I am for this event. It’s a queer cinephile’s dream come true!

In 1988, I was ten years old and already a highly impressionable young film fan. That was the year the original HAIRSPRAY was released into theaters. I had already started getting into cult film due my love of everything horror, but this film spoke to me on a much deeper level. It was subversive, smart, and best of all — fun. Two years later, I was hit over the head with another heaping helping of quirky, anti-establishment goodness with CRY BABY. I became obsessed. I needed to know everything there was to know about all the actors, actresses, the director, and everyone else behind the scenes.

Now flash forward to July 2012, when I met Mink Stole at DAYS OF THE DEAD: INDIANAPOLIS. It was a magical day that I’ll never forget. You could tell that she really loved spending time with all her fans. The main reason I mention this momentous occasion is because Mink was promoting a movie that she was a part of, called ALL ABOUT EVIL directed by Peaches Christ. Right then, I fell in love with Peaches Christ. Before then, I had never seen a drag performer embrace the horror genre so fully.

Fortunately for me, when I heard about IDOL WORSHIP coming to Chicago, I was able to have a chat with Peaches and Mink. My heart could literally explode, and I would die a happy little queer cinephile. 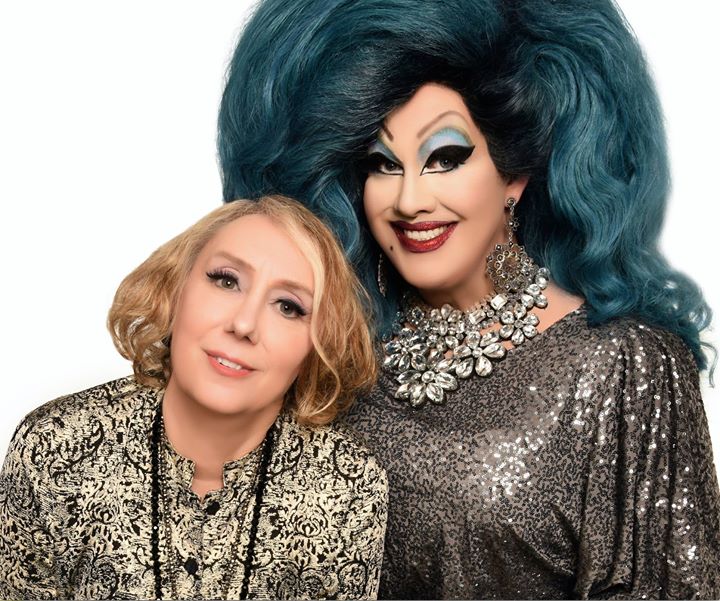 DAILY GRINDHOUSE: Was the idea for IDOL WORSHIP a collaborative effort?

PEACHES CHRIST:  Yes, we’ve been doing shows together for years and years. Mink was the first celebrity to ever come to my MIDNIGHT MASS movie event in San Francisco back in 2001. I was so nervous to invite her to come. I was such a big fan, and I tried really hard to create a fantastic tribute for her, and luckily it went really well, and we enjoyed working together so much that we began doing a very small version of IDOL WORSHIP together before screenings of her movies. This past summer we knew we wanted to do a show in Provincetown together but we weren’t able to screen a movie so we decided to create a fully realized cabaret show that’s part conversation, part song, and part screening.

MINK STOLE:  Peaches is too modest – the original idea was his (hers).  It’s true we had done a lot of on-stage chatting before film screenings, which was always entertaining, but it was Peaches who thought to flesh it out into an event on its own – adding music and film clips.

DAILY GRINDHOUSE: Could you tell me a little bit about the creative process in putting together IDOL WORSHIP?

PEACHES: Mink and I would jump on the phone and talk about what we thought was interesting, as far as conversation and song choices, and then we eventually came up with a flexible outline that we rehearsed. While the songs are going to be known by both of us, we don’t always know where the conversation will take us. It’s not scripted, so there’s a bit of improv to it, and discovery for us as well as the audience.

MINK: I’m an old-fashioned gal, and I love to get on the phone to figure out what topics we want to cover, what songs we’ll do, and how we’ll fit them into the format, and even what specific stories we might want to tell, but we never know for sure where our conversations will go. That keeps it fresh for us, and adds to the intimacy we like to have with audience..

DAILY GRINDHOUSE: Now this isn’t the first IDOL WORSHIP that you have done together — how’s the crowd’s response been?

PEACHES:  When we first did it in Provincetown, the crowd loved it, and I think it was encouraging enough that we decided we could do this show again in other places. That first show in P-town was fairly stressful for me though, because John Waters himself was in the audience, and of course so much of the show is a discussion about their collaborations over the years. But he was super sweet afterward and said really nice things. It just felt so strange to talk about someone who was sitting there… watching.

MINK: Provincetown was a lot of fun.  I have a long history there, and with Peaches becoming such an established presence, it was a terrific blend of the old and the new coming together in the present. As for John Waters being there, I admit sometimes I feel a little freer talking about him when I can’t see his face, but, I never say anything that would upset him, so it’s not really a big deal.

DAILY GRINDHOUSE: I’m a huge fan of both of you. Seeing you both in ALL ABOUT EVILmade me so happy. I love that movie. The cast is amazing, direction is spot on, and the dark humor is perfect. It reminds me of old Herschell Gordon Lewis films, with a bit of William Castle thrown in there. Peaches, were those your influence for the film, or am I off the mark here?

PEACHES:  They were HUGE influences — as well as Doris Wishman and the old Vincent Price movies I grew up watching on TV. I’m so glad you liked it and am excited to see that the film continues to find new audiences and fans over the years. 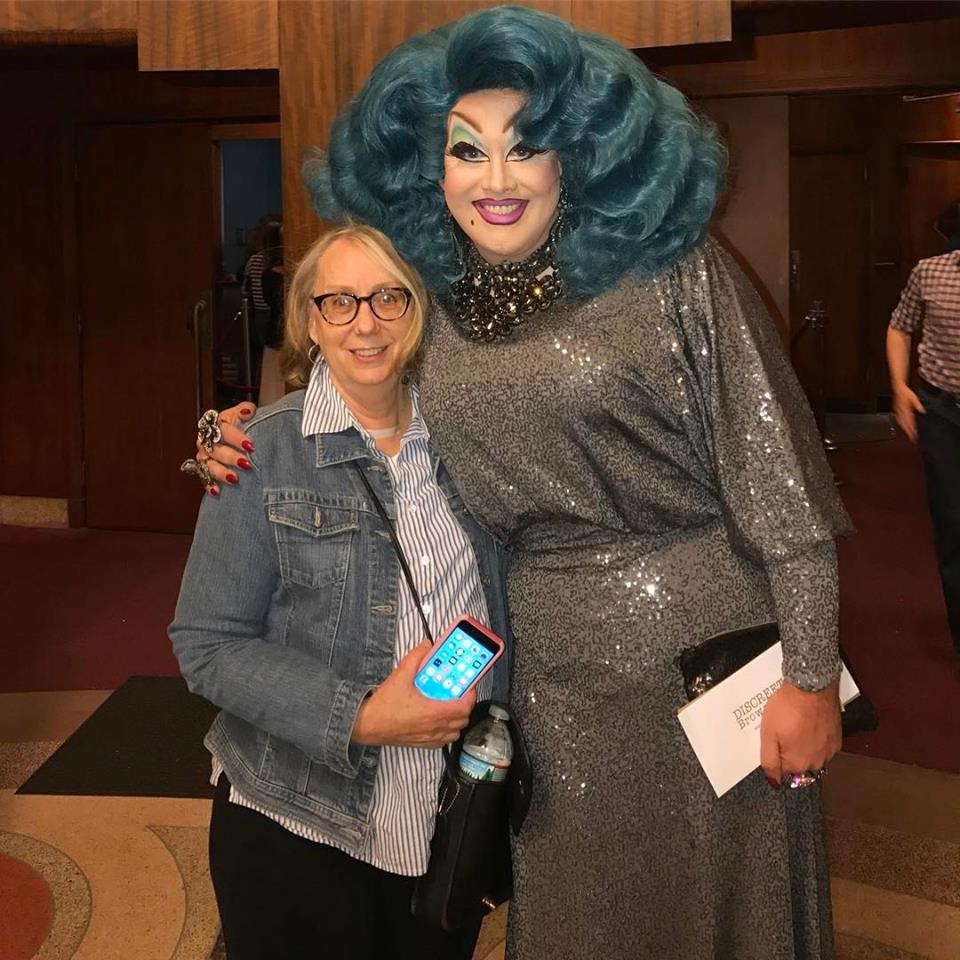 DAILY GRINDHOUSE: What was it like working together on ALL ABOUT EVIL?

PEACHES: It was great, but also really challenging, because poor Mink had to be in a prosthetic for much of the shoot, where her mouth was sewn shut, so imagine working but not being able to talk, or eat, or anything. She’d communicate with a pad of paper, and I felt horrible during those days where she was sewn up. One shoot day meant we were filming in an old dusty attic while her mouth was sewn up, and I knew it was a really hard day. I’ll forever be grateful she agreed to do it and that she did such a great job.

MINK:  I loved the script, and my part, so it was fabulous! Peaches did a terrific job as director, keeping it all together. Having my mouth sewn shut was really hard, because I’m chatty, and I was effectively silenced, but it looks so great on film that it was totally worth it! 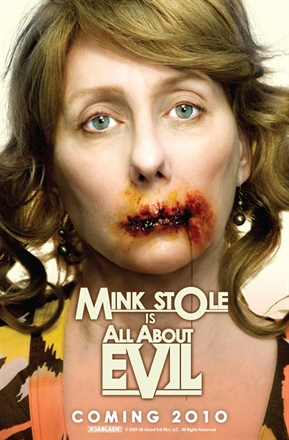 DAILY GRINDHOUSE: Had you met before making ALL ABOUT EVIL?

DAILY GRINDHOUSE: What were your first impressions of each other?

PEACHES:  I grew up quoting her dialogue and worshipping her and the Dreamlanders, so I was really very nervous and was just hopeful she’d be nice. When we actually met, she was so sweet, and charming, and smart, and funny, and more than willing to get onstage and share stories and charm audiences. She’s a total pro onstage, and I think our onstage chemistry really helped us pursue a true friendship offstage. I now consider her family, one of my dearest friends — we have become very close over the years.

MINK:  I had no idea who Peaches was, or what kind of event it would be, so when I walked into the theater and saw a huge “WELCOME MINK” banner and an animatronic Peggy Gravel [from DESPERATE LIVING] on the stage stirring a vat of rabies potion, I was flabbergasted, and I fell immediately in love with Peaches.

DAILY GRINDHOUSE: Peaches, Do you have any other movie ideas that we may see coming up?

PEACHES: Yes, and it looks like we’ll be shooting in early 2019. I’m super excited! ALL ABOUT EVIL was definitely the movie that little “Joshua” [Peaches alter-ego] wanted and needed to make, but this new one is more from the Peaches universe, and will be a dark comedy musical about what happens to two drag queens who perform the same GREY GARDENS parody for forty years. 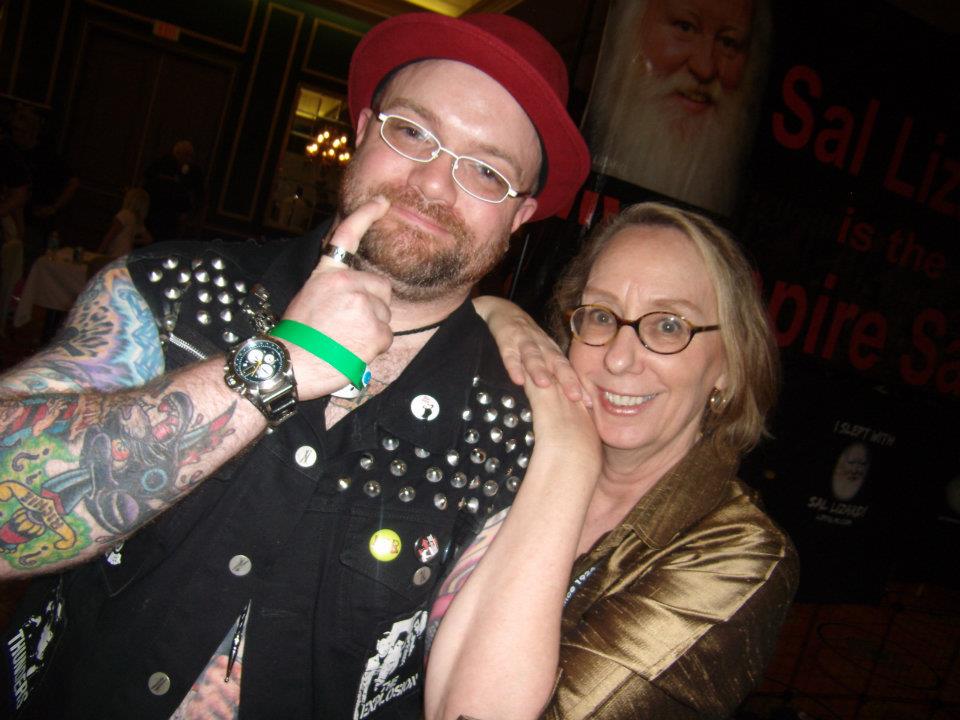 A huge thank you to both Peaches Christ and Mink Stole for taking time out of their busy schedules to chat it up with Daily Grindhouse. I am so excited for IDOL WORSHIP, and I hope to see you all there. This event will sell out. Make sure you order your tickets ahead of time by clicking here.