Herschell Gordon Lewis is a living legend in horror and exploitation cinema. Beginning in the early 1960s, Lewis and his producing partner David F. Friedman made nudist films and nudie cuties before inventing the gore film with BLOOD FEAST in 1963. He took a 30-year hiatus from filmmaking after THE GORE GORE GIRLS in 1972 before returning with BLOOD FEAST 2: ALL U CAN EAT in 2002, and in the decade and a half since then Lewis has seen a widespread appreciation for his work few artists live to enjoy.

Lewis makes an appearance in front of the camera in the new film TERROR TOONS 3, directed by his friend and protégé Joe Castro. The film will be released Friday, August 26th on iTunes. Herschell Gordon Lewis sat down for a phone interview with Daily Grindhouse’s Jason Coffman to talk about TERROR TOONS, Joe Castro, and the recent well-deserved recognition of Lewis’s work in horror and exploitation cinema.

Herschell Gordon Lewis (HGL): What may I tell you, Jason, that will advance the cause?

Jason Coffman (JC): Well, thanks for taking the time to talk with me today!

HGL: It’s my pleasure, we’re dealing in an area that I enjoy. I’m grateful to you for adding to the day’s enjoyment. So far!

JC: How did you come to be involved with the TERROR TOONS series?

HGL: Well, as you know, I’m an admirer of Joe Castro. I’ve said many times that I feel he is one of the more underappreciated artists in the motion picture world. And I would like to start a movement, a Joe Castro Marching Society. He and I worked together some years back on a movie. That was a movie called BLOOD FEAST 2, produced by a fellow named Jackie Morgan, and I directed it and Joe Castro did the effects. At the time, I was impressed not just by his professionalism but the good-natured way in which he worked. That is rare in our business. It’s something that more people should appreciate and endorse. So when I had an opportunity here, it just came from left field, to work with Joe Castro, I said “You bet I will!” When Joe Castro is making a movie, if he wants me involved in it, he’s got me. He is a rare bird, and I’m pleased to be involved in this movie with him.

JC: Do you like being in front of the camera rather than behind it?

HGL: Not really. Sometimes it gets frustrating for me. I will say to an actor over and over “No, not that way, this way, here’s how you do it,” and I’ll act it out. On occasion when it becomes impossible to generate the kind of acting mode I’m after, I’ll say “Oh screw that, I’ll do it myself!” In this instance, I mean sincerely if Joe Castro wants me in front of the camera or behind the camera, because it’s Joe Castro, any other factors disappear. I am absolutely dedicated to whatever I can do to see that he gets the recognition that I think he deserves. 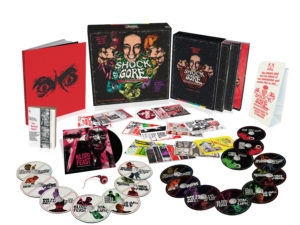 JC: Speaking of recognition, I can’t imagine how it must feel for you to see your work recognized in a such a big way with the upcoming Arrow boxed set of your films and events like the Exhumed Films marathon this past weekend.

HGL: I’m telling you this: I have proved if you live long enough, you become legitimate.

JC: You certainly have! How was the Exhumed show?

HGL: Oh, it was wonderful. It was well handled, it was well attended. These people who came to that show, they knew more about my movies than I did! That was most impressive. The grace with which the people who ran that handled it, they set a pattern that I wish more people in the movie business could follow that. So my only way of gauging (the success of the screening) was: I had a good time! I’m planning to have somebody put that on my tombstone: “He had a good time.” That’s way beyond most people. 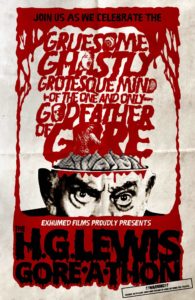 JC: It’s been really exciting to see all this, especially this year. I actually met you a few years back at an event here in Chicago, and I forgot I wanted to get a definitive answer for something. The film BOIN-N-G: Is that title pronounced “boy-oy-oing?”

JC: All right, well now I know I’ve been saying that wrong.

JC: I think that’s how it sounds in cartoons. How did that title come about?

HGL: I’m trying to remember what the genesis of that was, but I think it’s lost to history. I don’t want to accuse somebody falsely. I think it was a matter of just conversation, because unlike many of these movies they’re all satires, really. We don’t admit it, but they are. BOIN-N-G was announced as a joke, and it came off that same way.

JC: That film was produced by David Friedman and Stan Kohlberg…

HGL: Now Bill Kerwin, as I think you may be aware, was more or less my staff actor. He was an accomplished actor. He could handle anything. What else I liked about Bill Kerwin is that when the day’s shooting was over, he would help pick up the cables at the end! He played the lead in BLOOD FEAST, he played the lead in TWO THOUSAND MANIACS, he was always available. He moved to Florida and I sort of followed him. Whenever Bill Kerwin was available, he would be in one of my movies. The only problem I had with Bill was that he smoked. Man, did he smoke! And he was forever lighting a cigarette on camera! To which I had horrible objections. There would be a scene and halfway through there would be a cigarette with a shorter stem than there was before. But except for that, he was absolutely ideal on the set.

Stan Kohlberg of course was a fellow who owned some drive-in theaters around Chicago. When he saw the business that David and my pictures were doing, he wanted in. So we formed a company, I think it was called Box Office Spectaculars. And then there was a second company called Jacqueline Kay. Jacqueline Kay was Kohlberg’s wife at the time. And those two companies began grinding out these movies like hamburger. We had a good run with those.

JC: Unfortunately those early films aren’t in the Arrow set that’s coming out in October. I think the earliest film in that set BLOOD FEAST.

HGL: The first movie in the entire world of what we now call “splatter films” was BLOOD FEAST, and I made it. I had no notion at the time that I was establishing an entire new genre of motion pictures. All I knew was I was trying to make the kind of motion picture the major film companies couldn’t make and wouldn’t make and some brave theater might show. At that time, it was theaters or nothing, there were no DVDs, there were no videocassettes, there was nothing. Independents had a really tough time scrabbling around trying to get his or her motion picture played somewhere. I was stunned at the reception BLOOD FEAST generated. Recognizing that it was totally experimental and not having a lot of faith in my own capabilities, I spent as little money as possible to get something on the screen.

And it looks it. If you look at BLOOD FEAST today, the word that might come to your mind is “primitive.” Absolutely it’s primitive! Because I didn’t want to take any more chances than I had to, and I was self-financing. When I saw the results, I said “What will we do with this now that we’ve got it cut?” I was cutting this thing in my little cutting room in Chicago, and people walking by would ask “Is this a medical film?” And I thought “Oh gosh, we’re dead in the water.” We were not dead in the water. I figure we open the movie in Peoria, and if we die in Peoria who will know? We didn’t die in Peoria. To use a trade term, we crocked ‘em in Peoria. And that is when I said to my then partner David Friedman: “Hey, look here. Look what BLOOD FEAST is doing. What if we made a decent one?” The result of that is we made TWO THOUSAND MANIACS, which to this day is still my personal favorite of all the movies I’ve made.

JC: Do you know if there are any plans or possibility of getting some of your earlier films like BOIN-N-G on Blu-ray since those are not part of the Arrow set?

JC: He was at the Exhumed show, right?