Along with THE THING FROM ANOTHER WORLD (also released in 1951), this thought provoking slice of sci-fi was the first great film to come out of science fiction’s golden age of the 1950s. Its story about an alien visit and their “you better shape up or look out” message to our troubled planet is sadly just as relevant today as it was 62 years ago (so much so that it was remade in 2008).

Directed by Robert Wise, who had spent the previous decade cutting his teeth on some great Val Lewton genre films, the film successfully portrays itself as both a commentary on international social affairs and an imaginative space age tale full of iconic sci-fi trappings. Space traveler Klaatu (Michael Rennie), along with his eight foot companion, a robot named Gort (Lockard Martin), and their flying saucer provide lasting images that future filmmakers would model their own looks of the future around. Gort and the famous saying, “Klaatu barada nikto”, that is used to subdue the robot’s earth pulverizing wrath are now part of science fiction folklore.

With a solid supporting cast that includes Patricia Neal, Sam Jaffe and Hugh Marlowe (who would go on to butt heads with more spacecraft in EARTH VS. THE FLYING SAUCERS (1956)), and a memorable theremin heavy score by Bernard Herrmann, THE DAY THE EARTH STOOD STILL is a timeless film, and one that will always hold that distinction as long as us humans can’t get along. 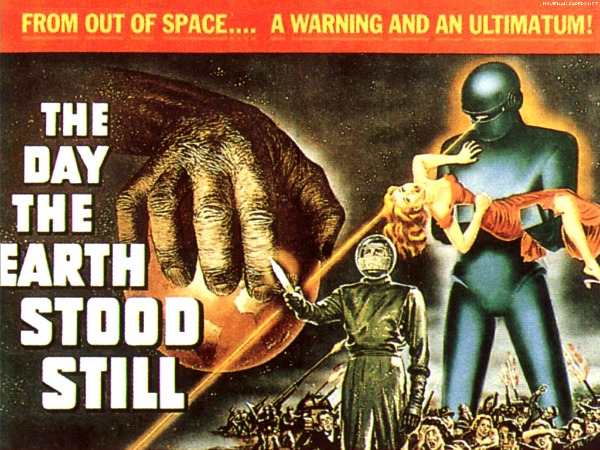