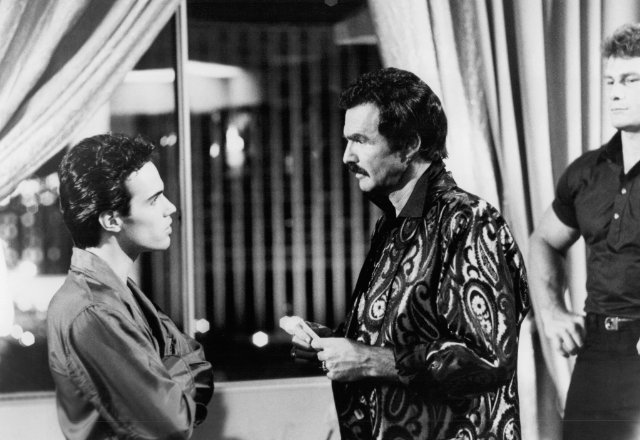 Brian De Palma lost me after SNAKE EYES, I think that film was a mess. FEMME FATALE was okay, but he really hasn’t made anything that worked for me since CARLITO’S WAY (which itself was far from flawless). There is no denying though that guy is capable of another masterpiece, but call me crazy if I think that a remake of a Burt Reynolds film isn’t going to be that masterpiece.

Sounds like Jason Statham is using chrome dome capital to remake HEAT with De Palma directing from a William Goldman script (writer of the 1986 film in addition to the book it was based on). I have no problems admitting to the fact that I am a Statham junkie. I dig the cat; I think he can throw a punch and a work a gun better than most, but yeah, his films are fucking Twinkies. They are junk food for the eyeballs (sans THE BANK JOB which is a very well-crafted flick). Here’s hoping that De Palma can do something cool with this material and not get sucked into the Statham void.

JASON STATHAM TO RETEAM WITH SIERRA / AFFINITY AND STAR IN HEAT

LOS ANGELES, CA February 8, 2012 – Sierra / Affinity announced today that they will commence sales efforts in Berlin on the remake of the 1987 feature film HEAT with Jason Statham set to star and Brian De Palma directing the action film from a script adapted by two-time Oscar® winner William Goldman. Goldman also wrote the original screenplay of the 1987 version of the film which starred Burt Reynolds. Both the modern take as well as the film from the 80’s are based on Goldman’s novel of the same title. Steven Chasman will produce alongside Statham. HEAT will commence principal photography in France in late 2012 or early 2013.

This tightly-wound, fun action-thriller, tells the story of a tough recovering gambling addict (Statham) who makes his living providing protection in the rough edges of the gambling world. Statham’s character refuses to resort to gunplay, strictly using hand and edged weapon combat. When a dear friend is brutally beaten by a high-rolling mobster, he helps her get her revenge and he ends up in more trouble than he ever imagined.

Sierra’s Nick Meyer says “We are pleased to once again be working with Jason and Steve on another project which in this case is based on great source material from a rare combination of an acclaimed novelist who is also at the top of his game as a screenwriter. We look forward to bringing this elevated action-thriller from Brian De Palma to distributors around the world. We feel this project has it all—a first rate piece of material, a legendary director and a global action star.”

Later this year Statham will be seen in Sierra / Affinity and Incentive Filmed Entertainment’s highly anticipated release of PARKER which comes to theatres on October 12, 2012. Statham’s other film credits include THE TRANSPORTER series, THE EXPENDABLES, CRANK, THE MECHANIC, and THE BANK JOB.

Chasman’s credits include PARKER, THE BANK JOB, and THE TRANSPORTER 1, 2 & 3.

Goldman has written numerous films including those that won the Academy Award® for best screenplay, ALL THE PRESIDENTS MEN and BUTCH CASSIDY AND THE SUNDANCE KID, as well as other screenplays for the films MARATHON MAN, DREAMCATCHER and ABSOLUTE POWER among others.