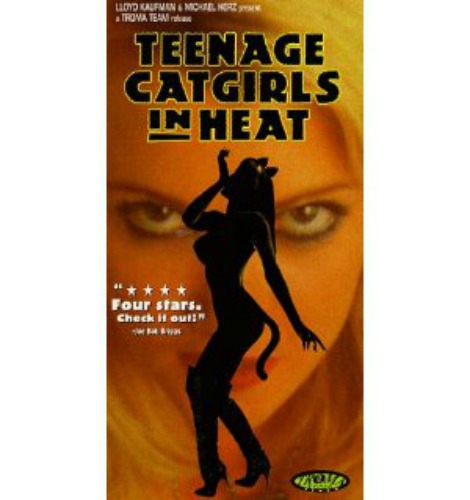 For all the junk and antique shops I go to, never once have I found an ancient relic or talisman that’s cursed. I’m pretty sure the law of averages says I’m long overdue to come across something that has a demon or malevolent genie in it, but it’s not come up yet. So imagine my chagrin that when I was watching TEENAGE CATGIRLS IN HEAT, the story begins with one such item. In small-town Riverville, an Ancient Egyptian artifact containing The Egyptian Goddess of Cats (I’m going to guess ‘Bastet… seems better than ‘Generic Mystical Cat Goddess) urges all cats to commit suicide. This little statue, representing feline omnipotence, also looks remarkably like the toilet scrub brush holder we had in the late 80s. I never thought as a kid to clean bathroom just to see if there was an ancient deity locked in the statue. Frankly, if your all-knowing, you likely don’t need to be housed in a toilet brush holder and watching members of the household have a wee. 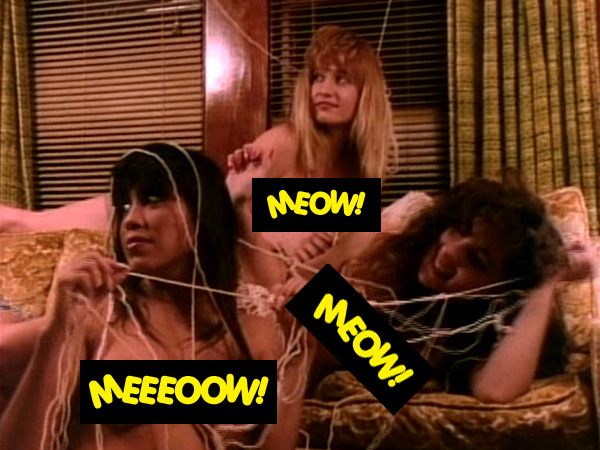 Either way, house-hold cleaning-caddy or not, this Cat Goddess statue urges all felines to come together, and commit mass suicide. I wasn’t aware that the Heaven’s Gate movement had a section for moody Cat Goddesses, but I stand corrected, because sure as anything in the film, all the cats jump into rivers drowning themselves. But by sacrificing themselves for ‘the cause’ the Cat Goddess has them reborn as teenaged females who’s mandate it is to mate with all males and then kill them in order to make room for the incoming ‘Great Litter’. With a lead up like THAT I’m hoping to get more than a few titty-flashes at the least, and at best some soft core porno-style love scenes. If I rent a movie title where kinky sex is implicated, I’m a simple enough creature to think that’s what I can expect. But now I KNOW better, and that’s what I get for renting movies with my groin and not my brain. 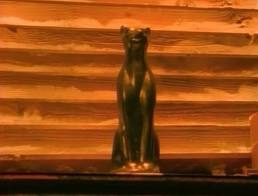 So for my money, what did I get? I can’t complain too much. Once I was prepared to accept the fact that I wasn’t actually going to get the lust-filled kink-fest I had been hoping for, I DID get a fairly funny and campy film which was enjoyable.

The plot continues after all the cats die and become sexy teenage minxes with the introduction of Ralph (Gary Graves), as a hitchhiker passing through Riverville, TX who invariably gets the reluctant hero role handed to him on a platter, and falls into the two common R.H. traps:

1) Gets involved
2) Falls in love with one of the antagonists, newly human Catgirl Cleo (Carrie Vanston)

Cleo for her part should be happy that the name works for both Catgirl form and feline because if she had been named ‘Mittens” or “Scruffy” Ralph might have questioned what was up a little more stringently. Ralph teams up with another unlikely hero Warren, the local cat exterminator in order to get the situation under control. He reminds me of John Goodman in ARACHNOPHOBIA without the charm. Being something of a cat person myself, and not much of a spider person, I found it hard to sympathize with a cat exterminator despite the Oliver Hardy-like approach to his character. But who’s to say? Maybe there are scores of anti-cat people who are spider enthusiasts? Maybe there are, but they probably have no soul. Getting back to the awkward love between Ralph and Cleo, they are faced with hard choices such as, will she betray him? What will become of their new found romance? Can he/they stop The Great Litter? What happens when she finds he has no barbs on his penis? Riveting questions, I know.

So while this movie didn’t have the lead up I was hoping for, this is a good one for saying the title over and over again in lascivious tones while rolling your eyes. You could also, say, play it at a party and have it as visuals. You won’t miss any major plot points, and it may serve as an icebreaker for two friends of yours who were looking for an excuse to talk to one another before making out. No one will be disappointed with the Catgirls playing around, pretending to adjust to biped life, while having major feline regressions. No one poops in a box of sand, though. Sorry for the spoiler, but enjoy the rest of the film.