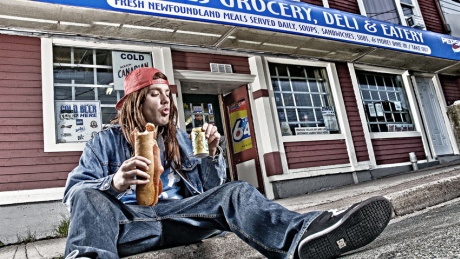 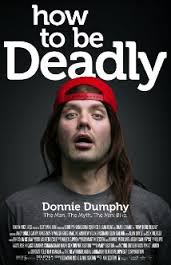 One of the advantages of having tenure here at Daily Grindhouse is that I get to review things that don’t necessarily fit the mandate of “cult” or genre film. Specifically, I’ve taken the opportunity to spotlight the rare film being released from my home province of Newfoundland, Canada. Earlier this year I was able to chat with the director of the terrific coming-of-age drama CAST NO SHADOW, and now here I am back again to wax at length about the feature-length comedy HOW TO BE DEADLY, currently touring around festivals here in the Great White North before finding its permanent home on VOD platforms.

While not necessary to enjoy the film, it’s worthwhile to explore a little background information about the film and the province it takes place in so you can maximize your enjoyment (and understanding). First, Newfoundland slang is impenetrable. I write this as someone who grew up with it and speaks it fluently. While mostly evolving from Irish, there are plenty of Newfoundland sayings that are unique to the island, and many of them make no sense outside of context — and only slightly more sense inside of it.

To start, the word “DEADLY” in the film’s title doesn’t mean what you think it means. In Newfoundland (and, apparently, Ireland), “deadly” means good. Brilliant. Awesome. The film HOW TO BE DEADLY isn’t an instruction guide on how to be awesome, however. It’s an often hilarious character study of Donnie Dumphy, a character that originated in a series of skateboarding videos made by HOW TO BE DEADLY director Nik Sexton and lead actor Leon Parsons. While the skateboarding didn’t blow anyone away, the character quickly developed a large cult of admirers, and a series of YouTube videos followed featuring Parsons as the notorious, long-haired, jib-rapping skeet.

For this one, I’m going to Wikipedia.

Basically a send-up of the kind of dirtbags that prowl around many of the smaller (and larger) communities of Newfoundland, Donnie Dumphy would sell drugs, ride his minibike around, and generally be a reprehensible — though fun-loving — nuisance.

It’s likely that Dumphy would have remained strictly a regional character if it wasn’t for the 2008 release of the YouTube video for his song “Havin’ a Time”, which dramatized the life and times of Dumphy in a catchy, and often hilarious, manner. Having chalked up nearly two million views, the video rapidly became a phenomenon, and combined with the release of his album I Loves Doin’ Wheelies, made the character a modern day folk hero in Newfoundland – and gained him plenty of attention around the rest of the country.

One other thing I have to mention is the legacy of Newfoundland humor, and how there’s a thorough-line between that often self-deprecating, character-based humor of CODCO and the similarly nuanced character of Donnie Dumphy. CODCO were a Newfoundland comedy troupe founded in 1973, and the members would go on to revolutionize how the province’s humor would be viewed around the rest of the country and beyond. While this led to both television (Wonderful Grand Band, The S and M Comic Book) and film (THE ADVENTURES OF FAUSTUS BIDGOOD) projects, the group’s most lasting legacy comes from its television sketch show CODCO, which ran on the CBC from 1987 to 1992, and would eventually evolve into the news-satire program This Hour Has 22 Minutes — which runs to this day.

CODCO the show was paired on television with The Kids In The Hall, and would similarly mine controversial material for laughs, though it had a much more satirical — and Canadian — edge that wouldn’t necessarily be easily appreciated outside the country. It should be noted that one of the founding members of CODCO, Tommy Sexton (who passed away from AIDS in 1993) is the uncle of HOW TO BE DEADLY director Nix Sexton. Also, all the surviving members of CODCO — Mary Walsh, Greg Malone, Andy Jones, and Cathy Jones — appear in the film. Therefore HOW TO BE DEADLY isn’t just meant as a launching point of a new(ish) character, but also a celebration of the vitality and constancy of Newfoundland humor.

Slice-of-life looks at the dingier side of Canadian living has been mined for humor consistently over the past decade or so, from the mulleted headbangers of FUBAR to the foul-mouthed stoners of Trailer Park Boys, but what separates Dumphy is not just his unwillingness to be redeemed, but also his general contentment with his lifestyle. While the film’s core involves Donnie trying to both win back his beloved Brenda and win a mini-bike competition, the stakes are refreshingly low, and only a brief – and tonally weird – pool party scene suggests there might be a greater emptiness at Dumpy’s core. Despite a rough looking childhood and a missing father, Donnie is happy to kick around with his menagerie of friends and spend his evenings “havin’ a time” at any number of drinking establishments. His lack of ambition is nearly admirable. 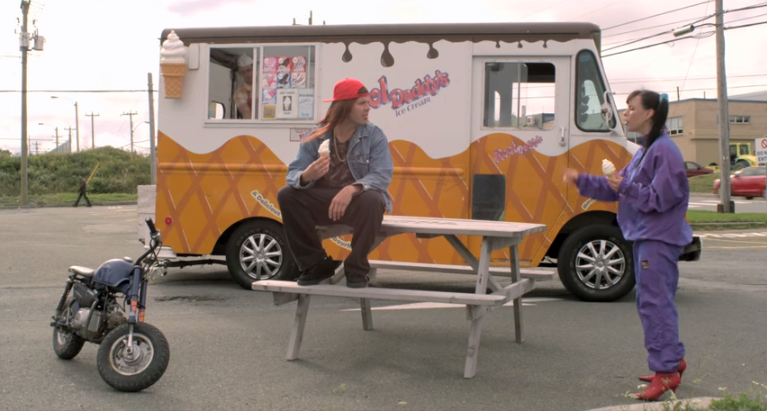 Parsons so envelops the character that when I recently interviewed him, it was a little hard to tell where he ended and where Donnie Dumphy began. Both Sexton and Parsons (as well as co-writer Edward Riche) have an obvious fondness for the type of “hard-tickets” that they grew up with in St. John’s, and the film is so good-natured that it’s easy to forgive its occasional rough edges and bizarre tangents. They are assisted ably by Sexton’s direction, which makes good use of the city’s unique landscape and displays a talent for visual humor — particularly in a hilarious junkyard training montage sequence. 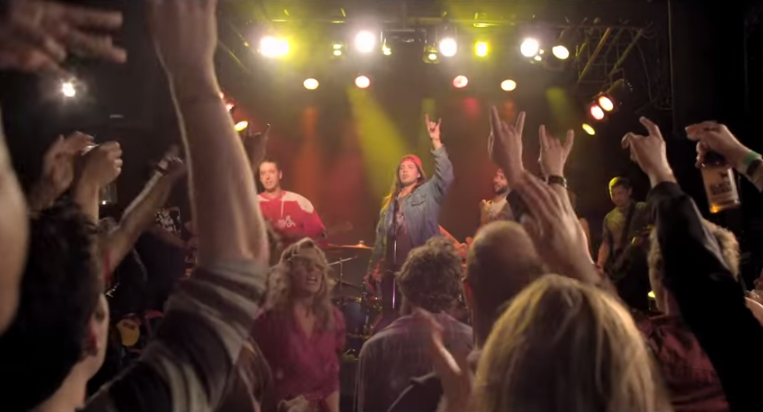 While mainstream — and mainland — audiences might scoff at some of the silliness, HOW TO BE DEADLY is a fun, energetic love-letter to a sadly under-appreciated touchstone of Canadian comedy.  While it might not be the ideal delivery system for Donnie Dumphy to take over the world, its sincerity and willingness to embrace its ancestry makes it a unique comedy animal, and it’s a joy to see a parade of familiar faces in small parts. Seeing it might not make you an honorary Newfoundlander, but it’s the next best thing.