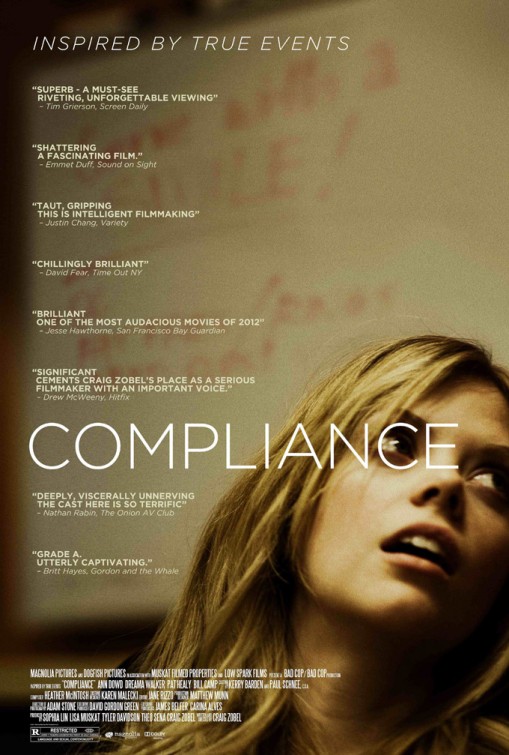 Fast food restaurants are our modern domestic spiritual battleground. If you don’t agree, take a look at the daily news. Every major intellectual (and anti-intellectual) conflict this nation faces at the present moment seems to be playing out as often as not in a McDonald’s, Burger King, Wendy’s, KFC, Taco Bell, or Chick-Fil-A. We’ve got stories about crime, race, gender equality, marriage equality, immigration, nutrition, animal cruelty, shooting rampages, and now, as detailed in the new movie COMPLIANCE, malevolent prank calls, invasions of privacy, and abusive degradations. If we had any trouble believing it, the end titles of COMPLIANCE eventually inform us that what happens in this movie has happened before. It’s hard to believe that anyone could be so cruel, but then again, maybe it should be plenty easier to believe, considering how much cruelty-ammunition readily abounds in the real world. 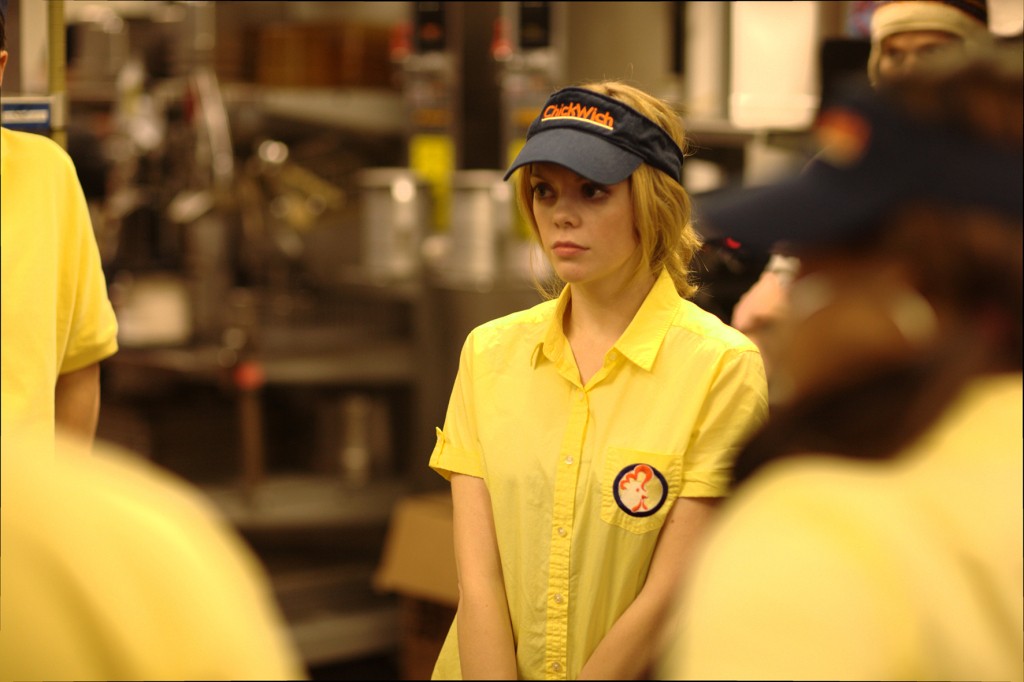 As COMPLIANCE begins, we get to know the everytown-American employees of an Ohio franchise of “ChickWich” — there’s Marti, the shift supervisor; Kevin, Becky, and Connie, the counter clerks; Julio and Harold, the grill men; and in particular, there’s Sandra, the manager, the central character of the film. As portrayed so expertly by Ann Dowd, Sandra is one of the most recognizably and authentically American characters to appear in a non-documentary in recent memory. She’s a decent person with a solid work ethic, she’s good at her job and working hard to keep it. She’s hoping to hear a marriage proposal soon from her longtime boyfriend, Van, effectively played with genuine and disappointing humanity by Bill Camp. The details in this movie are so subtle and so distinctly drawn, but so important: When Sandra tries to bond with Marti and Becky by sharing the information that she and Van occasionally “sext” each other, we instinctively get a sense of the shared history of all these characters as soon as she walks away and overhears the pair mocking her.

When Sandra gets a call from a police detective, giving his name as Officer Daniels, who tells her that Becky has been stealing from customers, the main drama of the movie begins. Becky, a pert and pretty nineteen-year-old, insists she didn’t do anything wrong, and she has a pretty strong alibi. Nonetheless, the voice on the other end of the line is insistent, and convinces Sandra enough that she sees no reason to do anything other than comply fully with his orders. His request begin with the mundane — check Becky’s purse, check her locker, keep her detained in the back room until police arrive — and rapidly escalate towards invasiveness and depravity.

You will probably watch this movie asking a lot of questions of the characters, but you’ll keep coming back to this one: Why do these seemingly rational characters, not a meek pushover among them, willingly go along with what Officer Daniels tells them to do? Well, I think both the script and the actors do a great job of giving the characters enough believable and understandable reasonings. I may have squirmed in my seat and clenched my fists every time Officer Daniels directed Sandra and her employees to visit a new violation upon Becky, but at no point did the events strain credulity. That’s what makes it so upsetting! This could happen in real life. This DOES happen in real life.

The sociopolitical implications broached by COMPLIANCE — The Patriot Act, Abu Ghraib, airport security, maybe even the recent Chik-Fil-A controversy, etc. — are fairly evident and much more interesting to debate with your friends after you see the movie, so I won’t get any deeper into them here. In fact, let me pause for a moment to say, please, just go see the movie. It’s thoughtful and impactful and well worth your thirteen bucks. But it’s also hard to talk about COMPLIANCE without getting into plot reveals, which I’m about to do in the next paragraph, so here concludes the last warning.

This movie wreaks havoc with the instinctive workings of the male gaze. As a man watching this film, it was impossible for me to fully disengage from the fact that Becky, played by Dreama Walker, is a lovely, pretty-eyed ingenue. Intellectually and emotionally, I found it horrific to watch her strip-searched and, eventually, worse, but strictly heterosexually speaking, it’s a more conflicted experience. Fellow straight males: If I told you that this movie has a nude jumping-jacks scene, how would you guys feel? If I told you that by the time it happens, you’d sooner watch a Downton Abbey nude jumping-jacks scene, would you believe me?

COMPLIANCE has the profound effect of subverting and corrupting the masculine impulse, slowing it down and making you think and feel and consider those feelings and their baser implications. This is what Hitchcock used to be able to do — to implicate the audience in the crimes being perpetrated onscreen, to feel complicit. Hitchcock did it to disturb, yes, but mainly so that his entertainments were less easily forgotten. With COMPLIANCE, filmmaker Craig Zobel has made a movie that isn’t easily forgotten, of course, but better yet, has broader cultural implications. It’s actually kind of important, I think.

The biggest surprise to me about the movie, and the key to its aims, was that Officer Daniels never once seems to have a sexual motivation for his degradation of Becky. Not once do you see him with his hand down his pants, or breaking a sweat. Instead, he’s roaming the house, doing the most mundane tasks. This evil gambit seems to be all in the pursuit of causing psychological trauma to everyone who picks up that phone. And that’s what makes it scarier. If this creep was doing all this just to see a pretty girl naked, I would hate it and despise it, but the ugly truth is that there’s a small shameful part of me that could understand. But notice how Officer Daniels’ crimes aren’t just vindictive and abusive towards Becky — he also ruins Sandra’s life, and thoroughly dismembers her relationship with Van. Quite frankly, he seems to take more pleasure out of that side of it than anything else. What he does to Becky is horrifying, but what he does to Sandra and Van is equally devastating. There are people like this out there, people of dark, incomprehensibly nasty motivations. It’s so scary for me to know that, and so might it be for you. This movie is fiction, but it’s true. 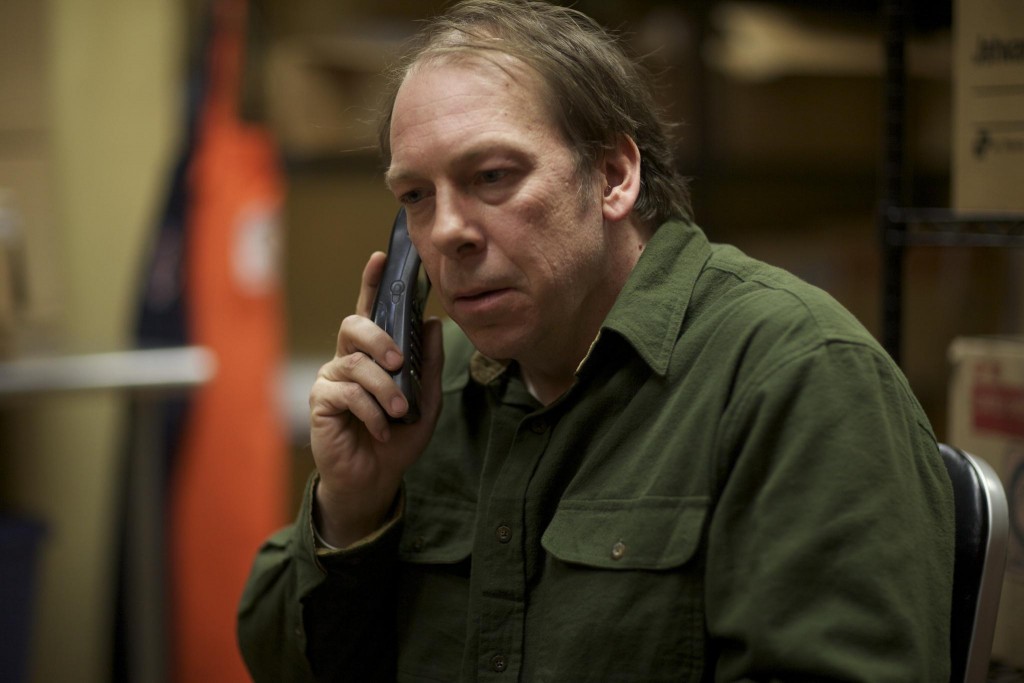 In a just world, this brave cast, particularly Ann Dowd and Dreama Walker, will be lauded for their brave and nuanced performances, and Pat Healy, who was so likable and funny in Ti West’s terrific horror movie THE INNKEEPERS earlier this year, creates a chilling screen villain more frightening than any other I’ve seen in all of 2012. The cinematography by Adam Stone makes a movie that transpires largely in the drab back room of a fast food joint look eminently cinematic, and the editing by Jane Rizzo is superlative.

As for the writer-director, Craig Zobel, all I can say is this is a masterful job, right down to the perfectly-placed long-take moment where the authentic police detective (played by Rescue Me‘s James McCaffrey) drives to the ChickWich. This is a director who obviously knows exactly where and when an audience needs to sit and reflect. Again, I’m reminded of Hitchcock, and of PSYCHO‘s often-misunderstood penultimate scene. I haven’t seen Craig Zobel’s previous feature (his debut), but I both eagerly await and honestly fear his next movie, because this one was truly haunting.

Quick illustrative anecdote: On the subway ride home, I caught eyes with a young woman, then instinctively glanced downward at what her dress allowed, as it’s summertime here in New York. Mindful of the movie experience I’d just had, I promptly looked away. I felt guilty! (Guiltier than usual, anyhow.) Maybe I deserved that. It’s good to be made to think about these things sometimes. We don’t often anymore get movies that leave the theater with us. With COMPLIANCE, Craig Zobel has created a film that is upsetting and controversial and probably even necessary. Seek it out.

This review appeared elsewhere, in slightly altered form, back in 2012.