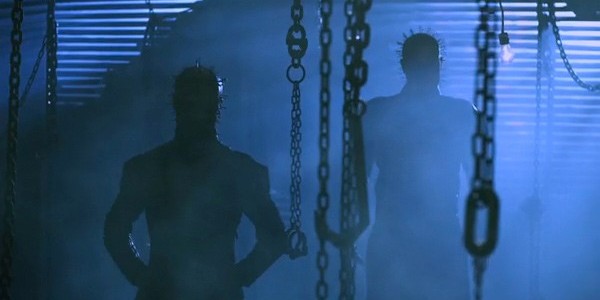 In the past year or so, the Internet hive mind has found people suffering through all nine HELLRAISER movies, either for masochistic kicks — much like the Lament Configuration — or out of true fandom. I know I had given up after the fourth entry, BLOODLINE, and recently sat through all nine films again for the inaugural episode of the Revenge Of The Pod People podcast that fellow Daily Grindhouse writer Katie Rife and I are hosting. For the most part I did not enjoy the later sequels, so HELLRAISER: REVELATIONS came as a pleasant surprise, like the sixth mile of a 10k. HELLRAISER: REVELATIONS tell the story of two friends, Steven and Nico, who travel down to Mexico in search of a wild weekend of partying. Instead, they come upon the puzzle box and eventually summon the Cenobites, as is prone to happen in the HELLRAISER saga. Steven and Nico disappear, and one year later, the families of both the boys meet for dinner, including Emma, Steven’s sister and Nico’s girlfriend. Steven shows up at the dinner party, but it is eventually reveled that he is actually Nico, on the run from the Cenobites, wearing Steven’s flesh, regenerating his body by collecting the blood and flesh of the people he murdered. Eventually though, Pinhead comes to collect his deficit of flesh.

HELLRAISER: REVELATIONS was written and shot in a matter of weeks, simply to ensure that Dimension Films would hold onto the rights to the HELLRAISER franchise for the inevitable remake. It was also the first script since HELLRAISER: BLOODLINE to be written expressly to be a HELLRAISER movie, unlike the other later sequels where Pinhead was simply shoehorned into already-existing scripts. The film opens with a handheld camcorder shot, and I immediately worried, “Oh no, found footage…” This wouldn’t have been unheard of for a low-budget shocker, particularly as the HELLRAISER movies have always been reactionary to what was going on in horror sub-genre’s at the time. INFERNO and HELLSEEKER are procedural detective stories like SE7EN, HELLWORLD has elements of torture porn, and DEADER has a touch of HOSTEL. Thankfully, the found footage is only one part of the story, and used as an effective storytelling tool. The film does fall into a little of the home invasion style thriller, but it never seems forced and helps provide a frame for the story of Pinhead and the Cenobites. The film also has a better visual style than the previous films, which screamed late night cable cheapies; the digital slickness adds some production value to this low-budget outing. The fact that this script was written as a HELLRAISER movie shows, especially in comparison to the other later sequels. In some ways REVELATIONS is a very loose remake, or at the least, a throwback to the original film. While not 100% original, after the convoluted plots of the previous sequels, this film explores the mythology of the Cenobites and what they’re after. Steven collecting flesh for Nico is a nod to Frank and Julia from the original film, and the story isn’t big and grand, like the sequels, but more quiet and personal. REVELATIONS also embraces the kink/S&M and forbidden sexual elements that always appealed to me, but was starting to be swept under the rug by the third film — the same way studios did with Freddy Krueger’s past, making Pinhead more of a wisecracking Darth Vader than the Marquis De Sade.  There’s rough sex, a touch of incest and the torture scenes with the Cenobites are shot with a touch of eroticism, with a victim exclaiming, “Pain and pleasure; indivisible.” One of the characters even states, “Pain? Like bondage and shit?” A little on the nose, but it drives the point home. I always felt that this was Clive Barker’s original intent for these movies and I think the script, despite having been rushed, really feels in line with Barker’s vision.

One of the major complaints it would appear that HELLRAISER fans have with this entry in the series is the absence of Doug Bradley as Pinhead. He is missed, but Stephan Smith Collins is an adequate replacement; he looks good in the make-up and delivers the sacrilegious lines well. One has to ask, though, after eight sequels of varying degrees of bad, what was it about this script that Doug Bradley said, “I’m above this.” If Doug Bradley had returned as Pinhead, I think REVELATIONS would have been received much more graciously. The Pinhead in this movie is not the over the top villain of the third and fourth entries, but rather he is written as hell’s CPA, as he was portrayed in the first film. He’s a guy doing his job, he was summoned and payment must be made. The Cenobite designs are on point, spotlighting a female Chatterer as well as Pinhead’s junior accountant Steven, who gets a makeover from hell. 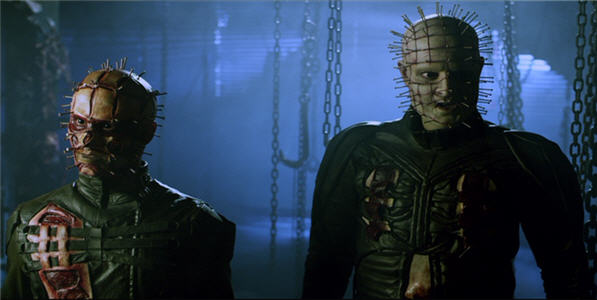 Overall, I highly recommend watching HELLRAISER: REVELATIONS with a fresh set of eyes, particularly for the die-hard HELLRAISER fan. I’m surprised at how many fans of the series decry this one, but will defend INFERNO through DEADER.  For what REVELATIONS lacks in originality, it exceeds in being reverent of the series and its themes. It’s a tight 75 minutes, which I think is a perfect length. There are some excellent practical gore effects, and overall, I think the story fits into the HELLRAISER mythology better than most of the later sequels ,but can also exist as a stand-alone film. The ending displays some serious pathos for a HELLRAISER movie. If you’re going down the dark path of the HELLRAISER saga, REVELATIONS is a fun last mile.