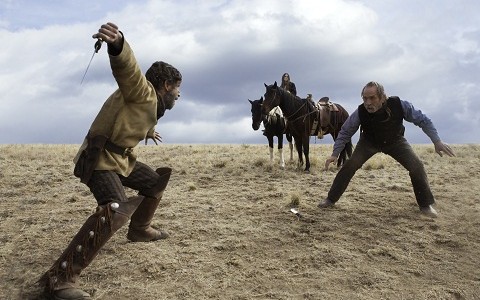 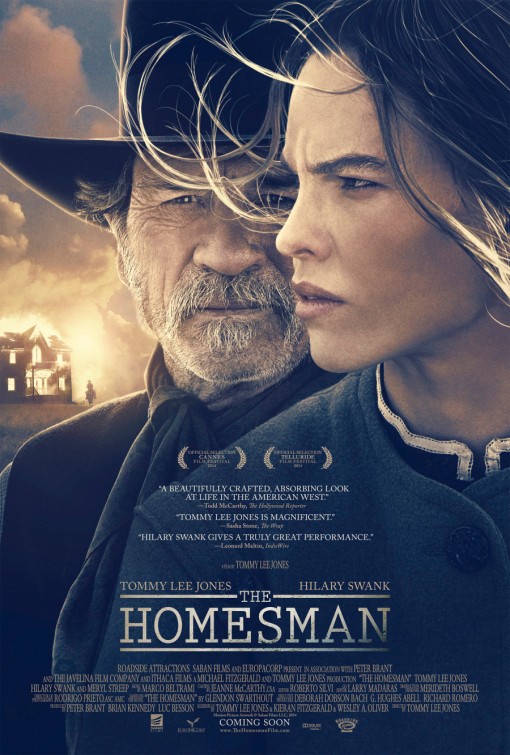 A harsh winter takes its toll on three women of the American west. The first watches all three of her children die of diphtheria and reverts into a catatonic state; the second goes feral after repeated sexual abuse by her husband and the death of her mother; the third kills her youngest child. Ill-equipped to death with these crimes, the husbands of the women task Mary Bee Cuddy (Hilary Swank), a local landowner and the only unmarried person in the homestead, to bring these women across the state to the nearest real city. Along the way, Cuddy saves the life of drifter George Briggs (Tommy Lee Jones) and makes him an offer: Help lead the wagon and look after the three women, and he’ll cross into civilization a few hundred dollars richer.

So unfolds the story of THE HOMESMAN, an odd little western that is already receiving buzz as a dark horse Academy Award nominee (if that’s your thing). On the one hand, many of the key elements of a successful western are present. Rodrigo Prieto’s cinematography is often stunning, using the flat horizon to create snowcapped tableaus as Cuddy and her merry band of misfits travel across open country. The music, too, adds to the grandness of the project. Marco Beltrami’s score occasionally tries a bit too hard to shoot for that iconic western soundtrack, but many of the songs provide a haunting subtext to the images on the screen. And, in the best display of award-season klout, THE HOMESMAN features an endless litany of recognizable faces popping up in supporting roles, showing that Jones’s diminished role within the industry has no bearing on his reputation among his fellow actors. Jones has revisited the western on multiple occasions—three of the four films he has directed fall within the genre, and all three have featured Jones as an actor in some capacity—and he demonstrates a deep understand of the genre in the look and feel of the film.

On the other hand, Jones seems uncertain as to whether he wants his western to be an homage to classical westerns or a self-aware deconstruction of genre archetypes. If you focus only on the character of George Briggs, then THE HOMESMAN serves as a send-up of the classical form: a stranger becomes part of a small-town community and finds redemption through his actions. However, the film also explores themes more directly associated with the modern western. Briggs kills without remorse, choosing to burn down a house than face the men inside it in open combat; Cuddy offers a glimpse of feminism in the old west but despairs in the face of the isolation and brutality outside the homestead. For how often THE HOMESMAN seems to paint a bleak picture of the American west, moments of sentimentality—such as a scene where Briggs embraces the three women in the middle of a river—fragment the film’s tone. A smart western can buck generic conventions to provide social commentary and comment on our relationship to film history, but THE HOMESMAN seems more interested in exploring Tommy Lee Jones’s character than saying anything so profound. And this obsession with George Briggs might be the film’s biggest failing. The first twenty minutes of the film focus entirely on Swank’s Mary Bee Cuddy and her complex relationship with her homestead. The men around her treat her with some combination of sympathy and scorn for her lack of male suitors, but they also rely on her generosity and skill with people to keep the community afloat. When Cuddy volunteers to take the women across the state, the film brims with the promise; and as Cuddy and Briggs set out on the road, the film just as quickly settles into the lazy conventions of gender. Briggs is the one who understands life outside a homestead; he knows how to interact with Native Americans on the plains. Cuddy, diminished in her competence, becomes a symbol of naivety that needs to be reshaped by Briggs’s expertise. Like the three women they are charged with shepherding through the wilderness, Cuddy exists only to better develop Briggs.

Why go through such pains to develop Cuddy as capable if your endgame is to break her down? The film seems to suggest that the road is simply too much for Cuddy’s state of mind, but the early minutes of THE HOMESMAN show that Cuddy is no stranger to hard work or disappointment. And if you are going to break Cuddy, demonstrate that her humanism has no place in the wasteland of the American west, why then depict Briggs as developing the compassion that Cuddy has lost? It is bad form to review a film based on what it could have been, but THE HOMESMAN has such a puzzling lack of self-awareness when it comes to its own strengths. Tommy Lee Jones is in fine form as Briggs—it has been years since the actor seemed this awake on the screen—but we have had our fill of revisionist westerns that show grizzled old men learning lessons about life, however temporary those lessons may be. This film should have belonged to Hilary Swank; it was an endless disappointment that it did not.