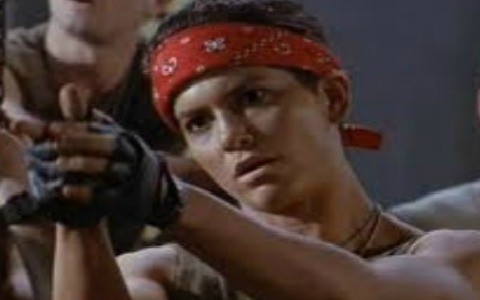 Jenette Goldstein. Most people think they have met her before.

She just has one of those faces. What they don’t know is this lady was a ripped gun toting no bullshit marine who could kill you in a New York second in one of the best science fiction films of all time. Jenette Goldstein is a chameleon, her appearance changes in nearly every role. See for yourself: Work in a double feature this weekend with ALIENS (her first role) and NEAR DARK (her follow-up). Jenette just knows how to get the job done and she is all kinds of badass in our book. We had a chance for some quick chit-chat with her while she was on vacation. So buckle-up as… 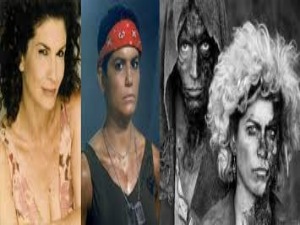 Daily Grindhouse: What are your Top 10 films of all-time?

DG: What kind of films do you dig today?

JG: As an actor, I’m looking at where great performances are being developed, and right now that seems to be on TV. The work that Edie DeFalco was able to do on Sopranos & Nurse Jackie, Gandolfini on Sopranos, Bryan Cranston on Breaking Bad, the whole ensembles of those shows. The Wire, Deadwood. Its a golden age. I should be so lucky to get a long character arc like that to chew on.

DG: You are kind of known as a chameleon. You have the ability to really transform yourself into the character on-screen, can you walk us through that process and how you get to know your character?

JG: I tend to work outside in: how does she walk, what is her accent, her mannerisms etc. Then I thread in the unconscious traits to serve the story. For example, on the surface, Vasquez is fearless. But that’s not realistic. I tried to play her as someone with nothing to lose. And I developed a back story for her to make this real. It started with a note in the script, that Vasquez and Drake are lifers– they will never get out of the Corps.

DG: You competed in drama competitions with Val Kilmer, Kevin Spacey, and others at an early age. What was that experience like?

JG: Teenage Val Kilmer was a stone fox. Kevin was the sweetest and smartest actor I knew. They were from Valley High Schools whereas we were Beverly Hills High. Initially they assumed that we thought we were better than them. It turned out they all had their own bedrooms whereas our whole department lived the now-famous slums of Beverly Hills. 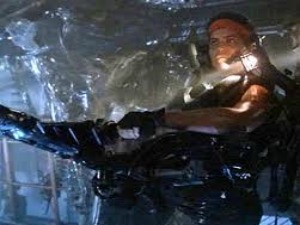 DG: How long did it take to get the call that the role of Vasquez was yours?

JG: I knew right away I was in the movie, but the part of Vasquez wasn’t guaranteed. Jim had to convince the studio. Took about two weeks. I was rather pleased with his success.

DG: Did you have any idea of how big this film was when you signed on?

JG: I had loved Terminator and Alien, but you never know. Mark Rolston and a couple others had just come off a movie that was supposed to be HUGE. Revolution, with Al Pacino. Remember that one?

DG: What was your regime like to get ready for Vazquez? You are just ripped in that film.

JG: I was already there. I had been body building at Hyam’s Gym in Hackney for two years already. It was a lucky fluke of timing. I’ve never been that buff since.

DG: How intense was the firearm training?

JG: Two solid weeks of urban warfare training with a couple of SAS guys back from a tour of Northern Ireland. It was valuable experience. My block of Silverlake in Los Angeles is LOCKED DOWN.

DG: How extensive was the character profile that was given to you for Vazquez?

JG: Two great lines of description: Chola from East LA who was given the choice of life in prison or life in the Corp.

DG: Jim Cameron said on the commentary for ALIENS that the crew at Pinewood Studios weren’t the biggest fans of his, was the set tense?

JG: It wasn’t that bad for me. I just hated the ham sandwiches. Ham Butties, they called them. Even the name sounds foul. Ham on buttered rolls. Every day they would bring them around. Plus, it was cold as hell. All that sweat you see in the film was water they sprayed on us that made it even colder.

DG: Are you doing anything for the 25th Anniversary of the film?

JG: We just did a reunion screening at the New Beverly Cinema in LA. with Lance Henriksen, Mark Rolston, Rico Ross, Michael Biehn and little old me.

DG: Vazquez Vs. Sara Connor… who comes out on top? 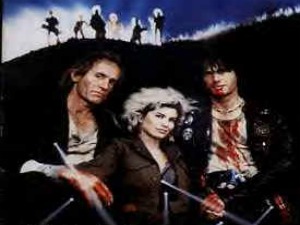 DG: You worked with Lance Henriksen and Bill Paxton again in your next film NEAR DARK. You guys were one film away from forming a badass version of the Rat Pack. You kind of found out by accident that you were all working together again correct?

JG: As I recall we were out together at a bar and someone let it slip they were reading this great script but they weren’t sure whether to do it because it was a Winnebago Vampire Western and, frankly, seemed like a dubious career move. Turned out we all three had the script and had the same concern, but after a few drinks we were all in.

DG: Your character in NEAR DARK, Diamondback, is very maternal especially when it comes to Homer. How difficult is it to adopt that so quickly after hanging up the intensity and toughness of Vazquez?

JG: Actually the maternal theme is almost constant through my career, including Vasquez. When I was preparing the role I gave her a child, who she was forced to give up. I had the makeup guy put a tattoo on my arm for her: Inez. This was in line with the overall theme of motherhood in the movie. I’ve mainly played mothers ever since. There’s nothing fiercer than mother love. 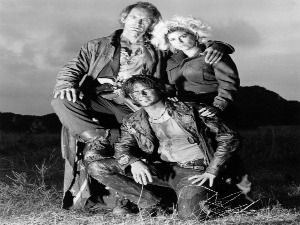 DG: What was the most difficult part of that film?

JG: The whole shoot was grueling. Cooped up in a truckstop, shooting all night with Lance and Bill? MADNESS. Oh, that was also the best part of Near Dark.

DG: Kathryn Bigelow put you all through a vampire boot camp to get ready for
those roles, walk us through that?

DG: Any need for an instant black-out since that film?

JG: Had to sneak out the back of the New Beverly Cinema, does that count?

DG: Vazquez Vs. Diamondback (we are pushing our luck but had to go for the
gold)?

JG: How close to dawn are we? Possibly Vas could dismember DB with heavy fire and move to keep her disabled until sunrise. On the other hand, assuming this is a first encounter, Vasquez is likely to be more than a little freaked out by DB’s inhuman healing abilities. A moment’s hesitation and Vasquez gets a knife in the throat. Verdict: best hope for Vasquez is to be turned and join the dark side.

DG: Your role in T2 was small, but the part had huge implications on the story. It always struck me how well you moved like Robert Patrick after you walked away from the kitchen incident. Was that difficult?

JG: I met with Robert to sort that out. He showed me all his work, for example he had decided that the Terminator would sense through the top of his ears so he always has a little forward tilt of the head. It was fairly straightforward actor’s work for me to take on his physicality.

DG: Can you watch your own films?

JG: All except Fair Game!

DG: What was the last “holy shit this is cool” moment you had on set.

JG: I’m probably not going to surpass the scene in Fear and Loathing in Las Vegas in which I was pinned down by Johnny Depp and Benicio del Toro while Terry Gilliam giggled in the corner.

DG: Are you working on anything now you want the fans to know about?

JG: Acting work is slow these days. I’m a business woman now. I noticed that it was hard to find a good bra for my size so I opened Jenette Bras, where the alphabet starts at D. We are doing very well. There’s gold in them thar hills!

DG: Our time here is done. Thank you for talking to Daily Grindhouse!