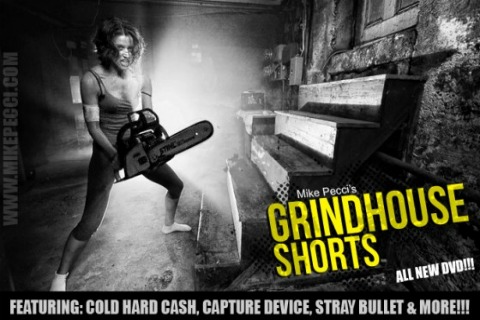 Mike Pecci is dropping a collection of his short films on Monday. The set includes the director’s cut of Cold Hard Cash in addition to Capture Device, Stray Bullet, and a new short. The DVD is going to be packed with some cool extras that should be checked out after you see some well oiled boobery slinging some bullets and taking up some chainsaws for some score settling. The DVD’s will be released with limited edition covers with artwork from comic book and poster artists as well photography from the man himself.

Here’s some yakety from the press release

Each film is uncensored and loaded with sex, violence, and Suicide Girls! The DVD is jammed to the limit with interactive menus, behind-the-scenes clips, brand new recorded director’s commentaries and the infamous “Mom-mentaries” (where the director watches the films with his highly opinionated mother) and loads of hidden “Easter eggs.” The disks will be released with three limited edition variant covers with artwork from comic book and poster artists as well as photography from Pecci.