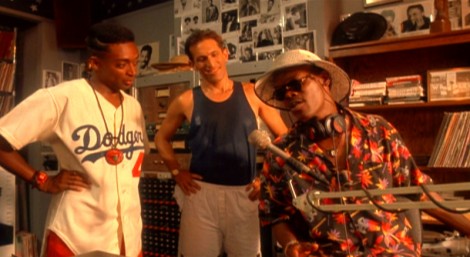 We’ve got another list for you film fans, and this time we’ll be moving all the way up the chart with a bullet with the top ten characters whose vocal stylings made the psychotronic cinematic exploits in which they appeared all the better. So settle in, open your ears and let the smooth audio waves wash over you and know that the question is not when we’re gonna stop, but who is gonna stop us. 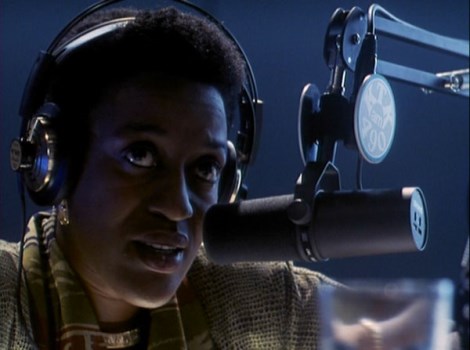 A number of films have used DJs as a point to give their lead characters someone to play off of in order to have characters not related to the situations become more suspicious of their potential crimes (see also MARTIN), but CCH Pounder’s talk show host in Mick Garris’s made-for-cable PSYCHO IV actually does something about the caller in question, and when that caller is Norman Bates, it’s hard not to mention her. She actually gets Bates to examine his fears, which over the course of four films, is no easy task. Plus, CCH Pounder!

9. Captain Midnight
Played by Tracy Sebastian
From ON THE AIR LIVE WITH CAPTAIN MIDNIGHT (1979) 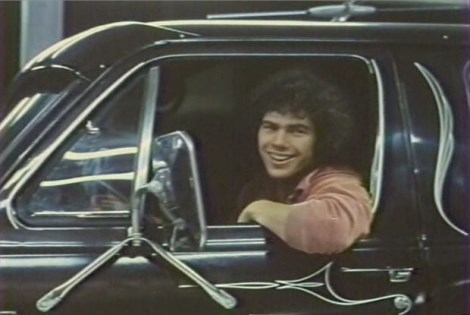 Long before Christian Slater pumped up the volume on the pirate radio circuit, Ferd and Beverly Sebastian (of GATOR BAIT fame) embraced the vansploitation trend in their little-seen drive-in flick starring their son Tracy as the eponymous Captain Midnight, who travels around in his van using a C.B. radio to intrude on FM radio signals. Making cash off of song requests, he becomes the hit of the local area, much to the chagrin of the FCC and the local decency coalition. It doesn’t make a hell of a lot of sense, but it’s still an entertainly fun little flick, and you can kind of see past the fact that the lead actor is just the offspring of the directors. 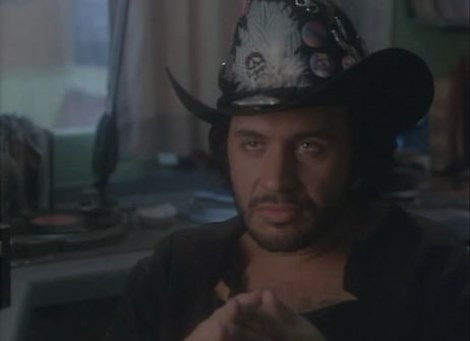 The ads for TRICK OR TREAT promised the teaming of Gene Simmons and Ozzy Osborne and instead delivered Marc “Skippy” Price rocking out to devil music. Still, even while Gene Simmons’ radio DJ Nuke appears only occasionally in the film, he’s still Gene Simmons, and he still sets the whole metal-musician-comes-back-from-the-dead plot into motion by handing off the deceased rocker’s final album to our hero. 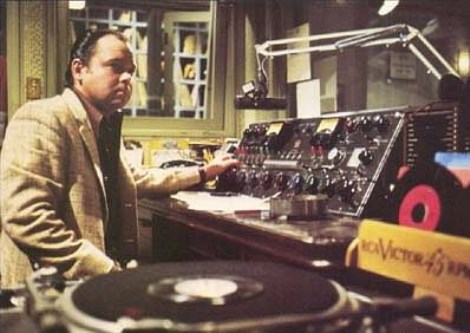 A number of films have been made on the trials and tribulations of famed DJ Alan Freed, who was busted as part of the “payola” scandals of the ’50s (but still deserves credit for introducing African American music to the teeming caucasian masses), but Floyd Mutrux’s film feels the most “authentic,” with a fine performance by McIntire. (Please ignore the fact that the cast also includes Jay Leno and Fran Drescher.) 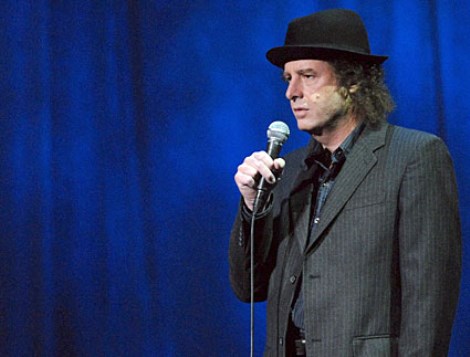 Proof that you don’t have to have an energetic voice to be a memorable DJ in a movie, just a unique one, the casting of deadpan comedian Wright as a radio host introducing the likes of “Doesn’t Somebody Want to Be Wanted” is one of RESERVOIR DOGS’s strokes of genius. 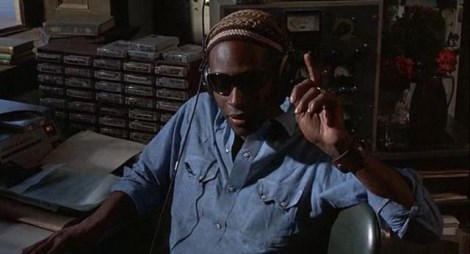 Barry Newman’s Kowalski is certainly the center of VANISHING POINT, but it’s Cleavon Little’s blind disc jockey Super Soul who serves as his cheering section, keeping tabs on the police radio and giving the listening driver pointers as how to evade the cops. Even after Super Soul is comprimised in a racially-motivated attack, his tone sends a clear signal to the man behind the wheel. Drive on, sir. Drive on. 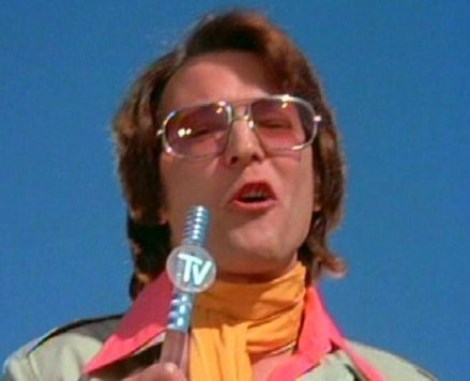 I could basically pick any of the roles in films that Los Angeles DJ Don Steele played, as they’re essentially interchangable — the unseen Rockin’ Ricky Rialto fending off the green monsters in GREMLINS is basically the same character as Junior Bruce, the excitable announcer of carnage in DEATH RACE 2000 — but ROCK’N’ROLL HIGH SCHOOL actually gives Steele a few brief moments of off-air time, dismissively showing Rif Randall and Kate Rambeau around backstage of the Ramones show. But Steele’s energy is more than welcome in any of the films in which he shows up, even if him playing “himself” (in KISS MEETS THE PHANTOM OF THE PARK) isn’t really any different from his performances as someone with a different name.

3. Unnamed DJ
Played by Lynne Thigpen
From THE WARRIORS (1979) 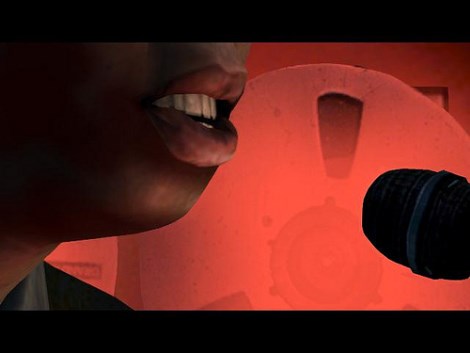 Lynne Thigpen’s character never appears beyond her lips and she’s not even named, but her soothing voice is so much of a central part of THE WARRIORS’ charm that it’s impossible to imagine the film without it. The voice that connects the activities of the gang on their way back to Coney Island with the other gangs attempting to find them, the character’s smooth transitions (both vocally and with the music that she plays) really serve as the tipping point between making the film an entertaining movie about street gangs to being a genuinely beautifully-conceived classic.

Stephen McHattie is an underrated actor, but he really gets a chance to shine in Bruce McDonald’s solid contagion flick, which revs up the isolation factor to great effect. The film’s focus is almost entirely on McHattie’s small town morning shock jock, as virtually all of the horrors of the outside world are translated through him to an unnerved public whom we never see. Grant Mazzy could have easily been a stereotype, but McHattie gives him a personable demeanor and becomes a genuine hero with which to be reckoned.

1. Stevie Wayne
Played by Adrienne Barbeau
From THE FOG (1980) 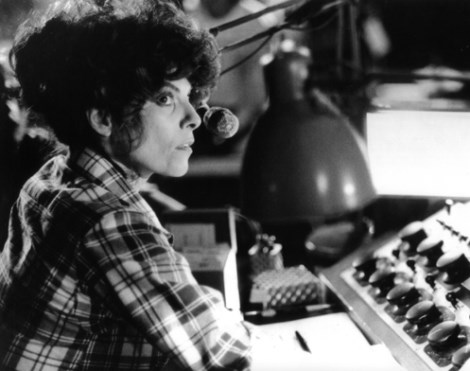 I miss the era of the smoky-voiced sexpot, and few films make better use of one than John Carpenter’s 1980 classic, as Adrienne Barbeau plays a radio DJ whose urgency in begging her listeners to save her son after the fog begins to close in on the area are some of the best scenes in the film. Barbeau is convincing both as a radio DJ and as a caring mother, and even though she spends most of the film alone, she comes off as one of the most memorable characters in a film full of them. Selma Blair’s performance of the same character in the 2005 remake is probably the best thing about the film, but that’s like being the tastiest part of a lettuce sandwich.

Who’d we miss? Whose dulcet tones rock your world? Are you a big NIGHT RHYTHMS fan? Does Gregory Hines’ performance in DEAD AIR set your soul on fire? Let us know in the comments below!