STEPHEN KING’S IT is one of those movies most people don’t even need to see to know what you are talking about whenever the name comes up. The mere mention of IT brings images of Tim Curry’s horrifying portrayal as the child-killing, monstrous clown Pennywise to the forefront of people’s minds, mostly because it was probably the reason they became so terrified of clowns to begin with. So when an IT remake was announced, people immediately rejected the idea of someone else filling in the menacing oversized shoes of the shape shifting stalker. The production finally revealed the look of the new Pennywise today via Entertainment Weekly, and to be honest, if this is what we can expect, this may be one of those cases of a remake being a good thing. Now, we finally have a look at not only the terrifying clown that’s menacing Derry, but also the kids who are tasked with stopping it. 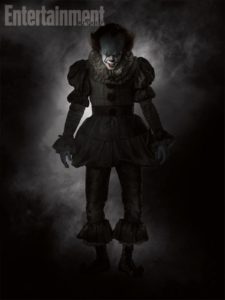 Bill Skarsgård’s take on Pennywise goes a different route, already a great idea as it implies the movie might have its own style instead of aping the original, by eschewing the Bozo The Clown look and going for some sort of early era jester look. If there is one thing that sticks out about this version of Pennywise, it’s the fact that he looks a lot more childlike than the original. This is a creepy twist when you consider the level of ferocity with which he attacks his victims. He seems to embody an evil child, but in the body of a clown, two things that mix to create pure terror. The size-too-small outfit, the seemingly buck teeth,  just the stare, should be enough to sway people’s stance on the “no remakes” platform.

Presumably, there were probably a few people browsing their Facebook feeds damning their friends name for sharing the reveal, condemning them to a long night of lying awake in bed remembering that “everything floats.” To summarize, I dig it, and I’m sure that regardless of the movie’s quality there will be a plethora of cosplayers scrambling to get together their costumes and act together for any upcoming conventions — expect several “who is more menacing” contests among costume groups. 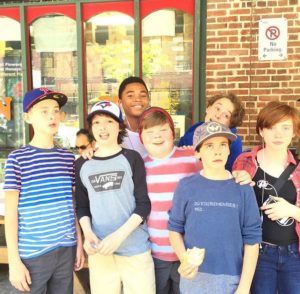 On the less nightmare-fuel-producing side of the spectrum, the production also revealed “The Losers,” the heroes of the story, and the prey of Pennywise. Once again, much like the Pennywise reveal, I think this bodes extremely well for the movie, and should prove that the team behind it care about the property and want to do it justice. These kids seem to emulate the look of the original cast, but with their own sort of style. Finn Wolfhard already has a head start on portraying a Stephen King-esque youth in Netflix’s Stranger Things, which had sort of a similar small-town-kids-versus-unknown-evil and the rest of the group look like they’re going to fit the bill just fine, with each one having a unique sort of look that gives them sort of a MONSTER SQUAD/ GOONIES feel.

So far, IT seems to be shaping up well, and looks to give a whole new generation of kids the same crippling fear of clowns the original did many years ago. So let’s keep our slingshots handy for the inevitable return of Pennywise.