Home  ⁄  The Wire  ⁄  [DG NEWS] Go See THE THING, THEY LIVE, and FREDDY’S REVENGE With Mark Patton This Sunday In Chicago

Many of us at DAILY GRINDHOUSE are longtime fans of the folks at TERROR IN THE AISLES. This group of Chicagoland horror enthusiasts have been putting together expertly programmed horror movie marathons for over a decade now, bringing in special guests from Frank Henenlotter to Clive Barker to Stuart Gordon for revealing Q&A’s and free pictures and autographs. 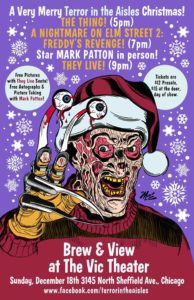 Their Christmas show is coming up this Sunday, December 18th at the Brew & View at the Vic Theater,3145 N. Sheffield Ave., Chicago. This year’s Christmas show will be John Carpenter’s masterpiece THE THING at 5:00 pm, A NIGHTMARE ON ELM STREET 2: FREDDY’S REVENGE at 7:00 pm, and John Carpenter’s brilliant (and timely again) satire of capitalism and corporate greed THEY LIVE at 9:00 pm. Doors open at 4:00 pm. 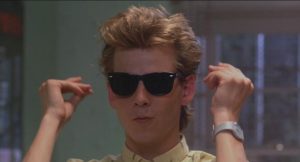 Mark Patton, star of FREDDY’S REVENGE, will be the special guest. There will be a charity auction to support VITAL BRIDGES, Santa Claus will be making a special appearance so you can ask him if he can get you the PHANTASM Blu-ray box set before its inevitable release next year, plus vendors, short films, and vintage trailers. One of the short films screened will be CHEEVIES FILMS’ KILLER CLAUS featuring DAILY GRINDHOUSE assistant editor Mike Vanderbilt.