Take a moment. Stop and think about your job. I mean, really think about it. Is it soul crushing? Possibly. Does it provide you with a decent living? Maybe, if you’re lucky. Is it hard? I mean, are you asked to pull off damn near miraculous feats with resources that could barely be classified as meager? That is also a possibility. But if you want to feel better about how you have it at your demanding job, you can always think about the career of someone like Christopher Pearce. 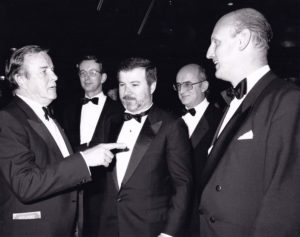 If you don’t know his name, that’s understandable. Christopher Pearce spent his life toiling first as a production manager on several low-budget exploitation films before moving on to the slightly more impressive titles of producer and executive producer of the same kinds of films he used to be in the trenches helping get made against all odds. What makes Pearce’s accomplishments impressive and worth remembering is that he got down and dirty, creating miracles out of next to nothing for the producing team of crazed filmmaking cousins Menahem Golan and Yoram Globus. That’s right, Pearce was a major cog in the freewheeling, out of control machine that was Cannon Films.

And now VARIETY is reporting  that Pearce passed away on December 4  at the age of 73. It seems a shame to let anyone who was able to make it so long working for Golan and Globus pass from this world unacknowledged, so let’s take a minute to look at what he accomplished.

Details about his early life are not readily available. Pearce received a law degree from London University and worked at Francis Ford Coppola’s Zoetrope Studios during the time that THE GODFATHER and AMERICAN GRAFFITI were produced. After working as a production manager on drive-in fare like SHAME, SHAME ON THE BIXBY BOYS and THE GLOVE, Pearce joined Cannon Films as associate producer on the 1980 slasher SCHIZOID, starring Klaus Kinski. I suppose if you can wrangle Klaus Kinski on a low-budget Cannon film and the experience does not leave you dead or insane, you must feel invincible. That is the only reason I can think of that kept Pearce coming back for more. Hell, I suppose it was more fun than using that law degree.

From 1980 through 1994, Pearce was credited as everything from associate producer to production manager to executive producer on many of Cannon’s most famous (and infamous) titles. Just a snippet of his IMDB page reads like the memory bank of most ’80s video store kid’s brains: NEW YEAR’S EVIL, () 10 TO MIDNIGHT,  MISSING IN ACTION, INVASION U.S.A., RUNAWAY TRAIN, OVER THE TOP, AMERICAN NINJA 4: THE ANNIHILIATION, and of course, BREAKIN’ 2: ELECTRIC BOOGALOO.

After Golan and Globus had their famous falling out in 1989, Cannon was taken over by outside investors. Globus and Pearce stayed with the troubled production company. Pearce eventually took over as CEO of Cannon Films from 1991 through to its end in 1994. His final credits for Cannon were as executive producer of the Chuck Norris horror flick HELLBOUND and the forgotten Michael Dudikoff vehicle CHAIN OF COMMAND. Both productions were the final films the longtime Cannon stars made for the company.

I’m not going to claim that all the films that Pearce worked on were great (a few were, most were varying shades of bad to batshit crazy). What I am going to claim is that he was at the epicenter of maybe the most prolific run any independent film production company has ever had. Most of us can only look at the story of Cannon Films, shake our heads, and wonder what the hell it must have been like to live through that experience. Christopher Pearce actually did live through it and if weathering that storm of insanity does not deserve a tip of the cap in this largely silly industry that we love, I’m not sure what does.